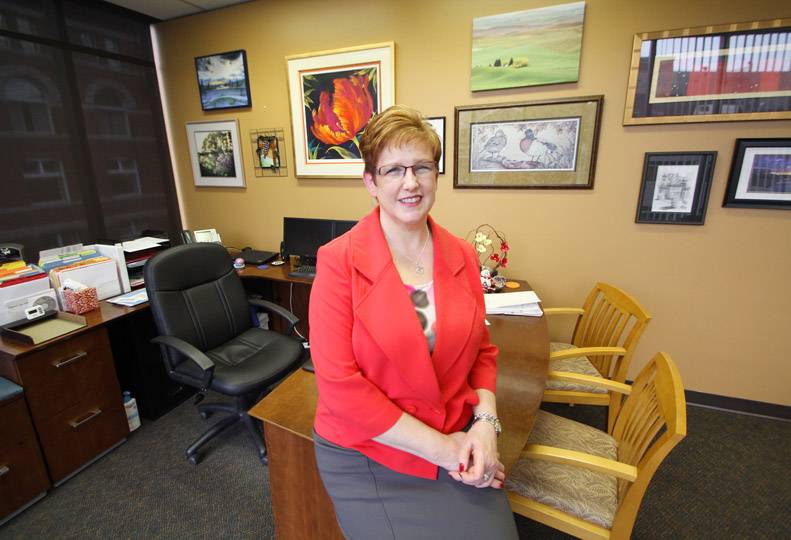 Since Cheryl Kilday returned to the Northwest 5 1/2 years ago, the Spokane Convention Center has been expanded, a 750-room hotel has opened across from it, and a number of smaller investments have added dining and shopping options in the city’s core.

All of the changes have added options or improved the pitch for Spokane for Kilday, who as the president and CEO of Visit Spokane heads up the organization tasked with bringing more people and events to town.

We took some time with Kilday during the quieter part of the convention calendar, while some of the year’s biggest events are still on the horizon.

Journal: How has the convention and visitor bureau business changed during your tenure in Spokane?

Kilday: The convention business has changed, in part, because of customers and in part because of our destination changes.

What’s changed with the meeting planners is, there are more what we call third-party planners. I might be with a national group that decides where a convention goes, but I might hire a third-party planner to do all of the leg work.

There are so many different avenues to a community for booking convention business, and it really, in many ways, demonstrates the need for a convention-and-visitors organization, or a destination-marketing organization, because we represent the community for those citywide or countywide events.

Being able to put all those pieces together for a great proposal for all of us and looking at the best time for the community for an event to occur is really apparent.

The single-hotel event business becomes a little more crowded, because those third parties are sending the proposal to us, but they’re also sending it to the hotels. We’re working with everybody to make sure we’re capitalizing on the best opportunities for the community. That’s where our role comes in.

From a leisure standpoint, leisure travel has changed because of mobile technology and digital marketing.

In the last year, mobile has become the majority use for consumers when they’re making their travel decisions. Having a mobile strategy is really important. We’ve seen that. Our mobile website growth in 2015 far outpaced our website growth, although they both grew.

Journal: They both grew in terms of number of site hits?

Kilday: In terms of number of unique users. We count unique users, because we can have the same people using us all of the time.

So, we’ve looked at how we’re approaching both the leisure and group side of what we do from a sales and a positioning point of view to make sure we’re in the right channels to get to the audience in the right point of their decision-making process.

As technology has been rapidly morphing, we’ll continue to make adjustments.

Journal: During your tenure, we’ve seen a huge capital influx into the industry, both from adding convention space and hotels.

Kilday: Yes, and we’ve seen a lot of development in the downtown. Since I’ve been here, we’ve had inventory increase in the Valley. There were a couple of new hotels out there. Downtown, we have the new hotel (Davenport Grand Hotel), and the Red Lion has become Hotel RL and they’re underway with some of their investment. There’s more happening because there’s more traffic coming into the area from residential growth in addition to meetings and conventions.

But yes, we’ve seen huge development, and that’s great to see. In order to make sure we’ve got what the convention delegates want, we need to make sure we have new dining and shopping experiences too.

Journal: Prior to the economic downtown, you’d have groups booking three to five years out, and during the downturn, that window narrowed. Where are now in that dynamic? Have groups returned to a broader window?

But there’s still a shorter cycle. With the downturn and with the period of time, stockholders were looking closely at what businesses were carrying on their books. A convention was one of those things. When you sign a contract for a convention, you agree to pay an attrition rate. That’s a liability, and attrition goes on your balance sheet. You’re basically saying, ‘I’m going to pay this hotel or the convention center an attrition rate if I don’t have those numbers I’m promising them.’ Attrition became a bad thing. So, some meeting planners don’t contract for all of their rooms any more.

There’s a recent study out that said one in three rooms taken for an event are actually outside of the block they commit to take. So, you’re only getting two of the three rooms under contract, and there’s another room somewhere in Spokane that’s not being counted. We’re making business decisions based on the contracted amount.

If you’re only blocking that smaller amount, you can do it closer in.

Journal: How would you describe overall market conditions?

The reason we like to book farther out is, our hotels can drive rate for the rest of that period. You’ve got those citywide events creating higher demand, then we all benefit. We are seeing that.

We’re in a situation now where we’re moving our first group. We have a smaller group taking 710 rooms, and we have an opportunity for a group to take almost 7,000 rooms. We’re moving the 710 rooms to another date to accommodate the 7,000. That’s a good problem to have.

We have others we might need to do that for. That’s a new era for us. It’s a good place to be.

Journal:  Could you put some numbers to it? What’s a large group for you?

Kilday: We consider a citywide convention any group that has 450 room nights on peak or more, with two or more hotels involved and use of the convention center or another public facility.

What we’re going after is those groups that need 1,200 rooms on peak, because we have 1,100 rooms connected to our convention center now, and you’ve got the Red Lion and a number of other properties within three blocks. If you expand to eight blocks, you’ve got quite a few more. So, 1,200 to 1,400 rooms are what we’re going for. That’s really our sweet spot.

Journal: In Spokane, is there any seasonality to the convention business?

Kilday: There is. From a meetings and conventions standpoint, winter months are harder because people worry about getting here. It’s not that they don’t meet in cold places. It’s that air transportation can be bad somewhere else, making it hard to get here.

Then, July and August is softer for us, on the weekends particularly. It’s not because people don’t want to meet here. It’s because we do so well with leisure travel that our hotels don’t want to discount the rates for meetings and conventions.

Journal: What have been some of your biggest wins in terms of landing conventions over the last year or so?

Kilday: In 2015, we booked the Lions Clubs International, which is a really good and significant group for us. It’s the Canadian delegation, as well as the Western delegation of the Lions, so we’re really excited about that.

The Jehovah’s Witnesses have booked for their Watchtower convention.

What they do is look at booking in the darkest weekend of the year, so they’ll be here the Fourth of July. They’ll fill the arena, and that will be later this year.

Journal: You had a big group last year with the 73rd World Science Fiction Convention. It was funny from a layman’s perspective because the last one was in London, and this one is in Spokane. Those usually don’t go together.

Kilday: You know what’s pretty cool about that is that took us about six years to get.

Not everybody understands how long it takes us to get an event like that. We had sent somebody to check it out just before I started working here, just to see if we could really accommodate it. Then we figured out, yes, we could.

One of the first site visits I was involved in when I started here in 2010 was with the local people who were going to decide if Spokane was going to be their recommendation for the Northwest.

Going through that process and having them finally come in August was great. The year we were bidding on it, we were bidding against Orlando and Helsinki. It’s very interesting how they go internationally from one continent to another.

So did the square dancers (with the 2012 National Square Dance Competition). It was huge, and it was over Hoopfest. Everybody thought, ‘You can’t do this over Hoopfest.’ Hoopfest is huge, and we don’t want anybody to feel like we’re infringing on it. Our hotels fill that weekend, but not just because of Hoopfest. Everybody agreed to take a smaller piece and distribute it, instead of having large room blocks, and the square dancers were fine with it.

We were able to make it work. If someone would have come in and said, “I need 600 rooms in two hotels over Hoopfest,” that would be impossible, but because the square dance organization was willing to spread it out, it worked.

There have been some great opportunities to bring some big pieces of business here, and we’re trying to make that more of the norm and less of the exception.

Journal: We spend a lot of time talking about the convention piece of your business, and the visitor piece seems a little more intangible to me. Is that the case for you? Or do you feel like you have some good measurements for trends within leisure travel?

We did a conversion study on our website. Our website is used by all kinds of travelers. Some convention travelers use it.

A lot of sports spectators use it. So do business travelers. We know from our research that our website increases incremental travel and incremental spending.

Journal: What do you mean by incremental spending?

Kilday: If you’re already planning to come here, we can’t count all of that spending.

But will you spend more because of our website? The answer is overwhelmingly yes.