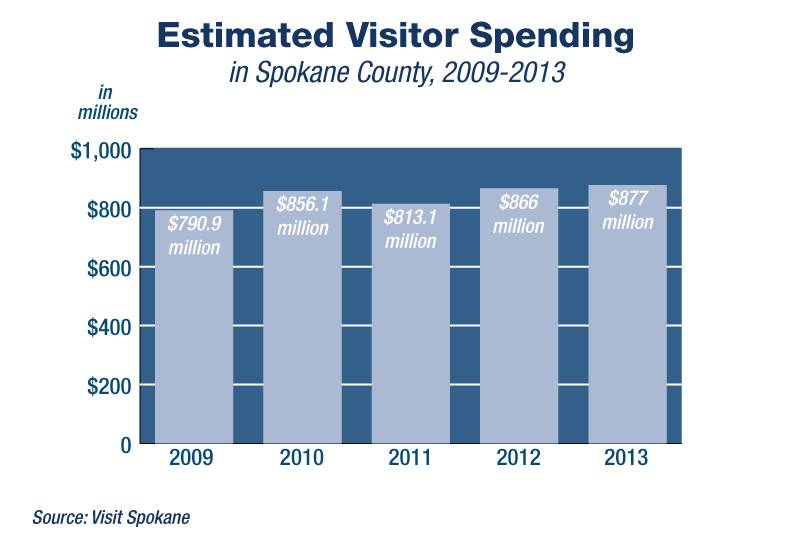 Overall visitor spending in Spokane County was up last year by a little over 1 percent, and more than a quarter of that overall spending came from Canadian visitors.

“About 27 percent of those visitors, or more than 600,000, were from Canada,” says Kilday. “Those are pretty substantial numbers,” she says, adding that the figures are an estimate.

Kilday says Canadian visitors spend time here dining, shopping, taking in shows such as the Best of Broadway and other entertainment Spokane offers. She says they often talk about the weather in Spokane.

“One of the things they talk about is how good the weather is here,” she says. “They love Spokane. And they fly out of Spokane. It’s cheaper to fly in the U.S. than it is in Canada. They also come to shop the big-box stores and do shopping tours.”

“A group of men can charter a flight to Spokane and spend three to four days golfing, given that there are 36 golf courses here. And it’s lower in price than up there,” she adds.

The Runyan report put the number of overnight visitors to Spokane County in 2013 at 2.7 million, or about the same as overnight visitors in 2013. Total direct tax receipts from visitor spending rose to $62 million last year, from $60.7 million the previous year, and the report says total direct industry employment in the county stemming from visitors rose by about 180 workers, to 9,620 last year from 9,440 in 2012.

The reported estimated that Spokane-area visitors who stayed at hotels and motels spent $483 million in 2013, up from $473 million in 2012, and those who were guests in private homes spent $235 million, up from $233 million in 2012. Those staying in Spokane-area campgrounds spent about $9 million here in 2013, those staying in vacation homes spent $3 million, with volumes for both categories being about the same as in 2012. Day travelers spent about $148 million here  in 2013, the same as 2012.

Visitors spent $202 million in food service, up from $199 million the previous year, and $70 million on arts, entertainment and recreation here up from $68 million in 2012.

Visit Spokane says economic impact from visitor spending comes from three areas of travel: conventions, meetings, and events; leisure travel; and business transient travel or those who come to Spokane on business.

Like most years, Kilday says, conventions and meetings were the main catalyst for growth. In 2013, there were nearly 984,000 attendees at conventions here and the economic impact in Spokane County was about $353 million, she says.

Kilday says overall she was pleased with the growth the numbers reflect as she expected the year to be fairly flat, partly because even years are bigger for conventions, meetings, and events and because 2012 was a big year with some large groups coming to Spokane.

“This year we didn’t have the large groups. Rather, we had a lot more smaller groups,” Kilday says.

At the national level, the report shows an acceleration of the growth rate of the U.S. travel industry. In 2013, visitor spending was $900 billion, an increase of 3.6 percent over 2012.

Kilday says 2014 is looking like it will be a solid year for convention business, especially since the convention center expansion is under construction and meeting planners do not tend to book business when construction is ongoing.

“The impact of having a new convention center has been huge, but some people are waiting to book travel,” she says. “They want to make sure it’s completed on time.”

Kilday says most large convention organizers select their event venues three to five years in advance. Some people are waiting to see if the convention center expansion will be done on time to book events, she contends.

“But the impact from the expansion has been huge. It will make a difference in numbers of events held here and in the size of groups. We will see a big increase in the number and size of groups, and we have sales that are indicating as much,” Kilday says, adding that 2017, 2018, and 2019 are shaping up to be pretty solid.

The 73rd World Science Fiction Convention will be held in Spokane—an event scheduled for August 2015, she says.