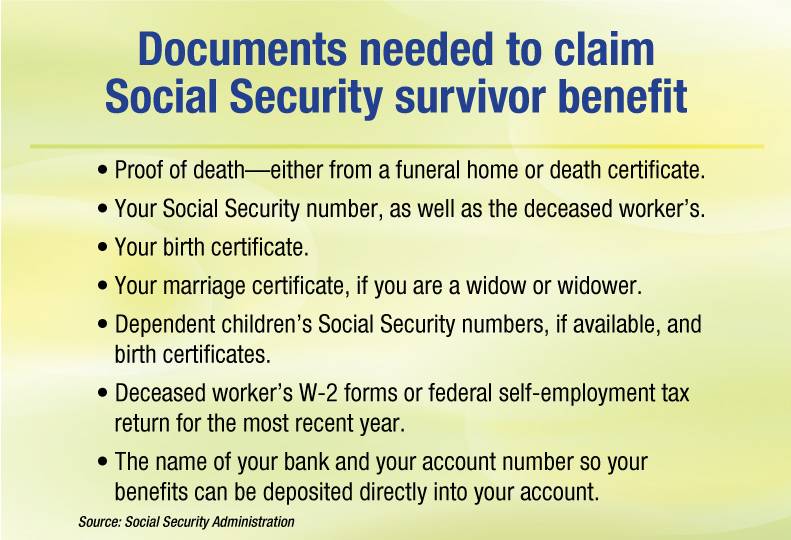 Understanding the Social Security system can be a challenge regardless of marital status, but if you’re married and your spouse dies, it’s important to have prepared in advance to traverse a system that can be complex, says Sarah Carlson, owner of Spokane-based Fulcrum Financial Group.

Initially, Carlson says, one of the ways to get more information is to go to the Social Security website at www.socialsecurity.gov. Online calculators are available at the site to provide estimates of monthly retirement benefits, life expectancy, and how earnings can affect benefit payments for people who are currently working and are eligible for retirement or survivor benefits in the current year.

“The smartest thing for married couples to do is go online and look at projections of retirement for both people,” Carlson says. “First make sure the work history is accurate,” she says, adding that it’s not uncommon for people to find gaps in earnings.

The actual monthly dollar amount married couples could receive depends on each person’s earnings, and whether they were subject to Social Security taxes over a lifetime, Carlson notes. Each person’s Social Security statement provides an estimate of survivor benefits.

Depending on work histories of both people, it can be advantageous to tap into a spousal benefit and delay taking your own benefit, she says, although typically the longer a person waits the more the benefit will be.

“Typically if you take early retirement, you will take 30 percent less than you would if you waited until full retirement age,” she says. “That can sometimes can mean hundreds of thousands of dollars.”

If survivor benefits are taken before full retirement age, some Social Security benefits can be lost by working, she says.

“Earned income becomes prohibitive because if a person works part time while receiving Social Security benefits, the government can limit what a person can make,” she says.  “If you wait until full retirement, you won’t get penalized and if you wait until age 70, you can get 130 percent of your benefits on the indexed scale,” she says, adding that the amount depends on a person’s birthdate, and other factors.

Donald Morgan, a financial adviser at Independent Wealth Connections, in Spokane Valle, says that upon the death of a spouse, most widows or widowers are eligible for Social Security survivor benefits if the marriage has lasted at least nine months. Morgan cautions that the period right after losing a spouse can be the worst time to make decisions that will affect someone’s financial future.

“If you’re a widow or a widower, you going to be dealing with a very complex, Byzantine set of questions while you’re under an enormous amount of (stress),” Morgan says. “Sometimes people make decisions about this just to get it behind them, not because they understand it or have made an educated decision.”

Morgan’s advice for people who don’t have a financial planner is to find a third-party professional, such as a retirement specialist or financial consultant, who is willing to “sit down with people and model what options are available.”

“What I mean by that is that they can create different models of what the options are, whether you should delay drawing on Social Security; which model gets me the bigger bang for the buck.”

“Many financial planners can model what choices are available and determine what’s best for someone based on answers to their personal questions,” he adds.

Morgan believes it’s critical that people don’t try to do it themselves without help from a professional since the rules are so complex.

Both Carlson and Morgan suggest that people find someone who can help maximize Social Security benefits before the time comes to begin drawing those benefits.

“Depending on a couple’s circumstances, it can be advantageous to tap into a spousal benefit and delay your own benefit,” she says.

Some couples who want to maximize benefits will use a strategy called “file and suspend,” she adds.

She says a spouse with an income higher than his or her partner can file for benefits upon reaching normal retirement age, but then suspend the benefit to gain additional retirement credits. The other spouse, with the lower income credits, can claim spousal benefits, collecting it until age 70 when that person could switch to his or her own benefit, including the full credit for the delay.

Morgan says it’s important to note that the survivor benefit is based on the lifetime earnings of the deceased and the age at which a spouse takes the benefit.

“If a spouse dies, the other person will get the higher of the two benefit amounts rather than both benefits,” she says.

Carlson cautions people to remember that the information provided by the Social Security Administration is in future dollars.

“Most people would be better to wait until full retirement age or ago 70 because it’s a time when you’ll need it the most. That’s when medical care can exhaust an estate,” she says.

“If income is coming in from Social Security and something like a pension, or investments, it will allow people more freedom for estate planning. Others will have to rely on Medicaid, and that’s why going to a financial planner is important. You can come up with a strategic game plan,” she says.

Morgan advises people to keep working as long as possible.

“Working has many social benefits … people feel needed and wanted, and there are many more benefits to going to work every day besides just the money. Unless of course you have genetic considerations … if people in your family die young because of heart attacks,” Morgan says.

Carlson says, “Decisions about Social Security should not be taken lightly. Most people take Social Security at age 62 thinking it’s not going to be around or think it doesn’t matter. It’s an important part of retirement planning.”