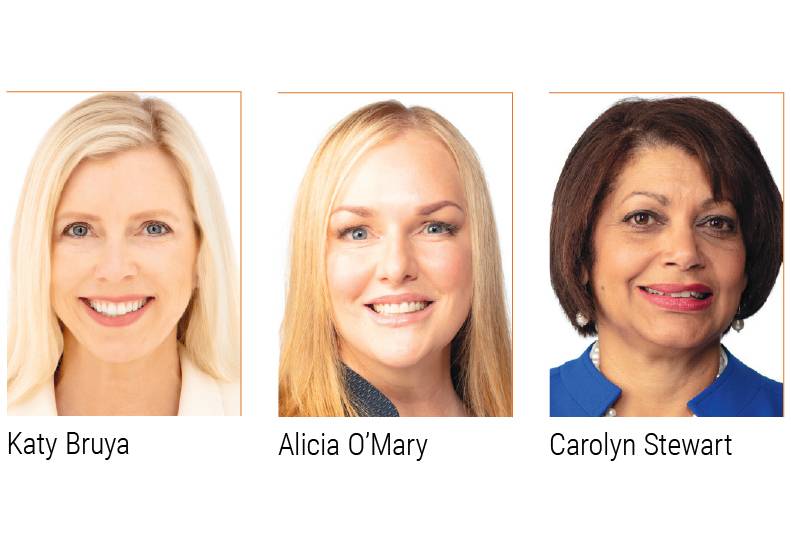 With a combined 78 years of experience in the banking and finance industry, Katy Bruya, Alicia O’Mary, and Carolyn Stewart of Washington Trust Bank all say that if it’s up to them, they’ll never have another employer.

Their affinity for their employer has a lot to do with the fact that the bank’s executive leadership team has made a concerted effort to diversify its employee pool in recent years, they say.

“I’ve been in human resources my entire career, but Washington Trust was the first financial institution I had ever worked at – and it will be the last because it’s an outstanding bank,” Bruya says.

Bruya, who is 50, is the bank’s chief human resource officer and is based in Spokane. She’s worked with the company for  21 years.

“When I started, I didn’t think a lot about the gender makeup of the bank, but I did notice that a lot of the leaders were male,” she says.

In more recent years, however, that has started to change. Around 2017, executive teams began actively grooming experienced and qualified personnel – many of whom were women – to begin replacing individuals who were planning for retirement at the beginning of 2018, she says.

“It’s been great to see that; it’s great to have younger women come into this profession,” Bruya says.

The range of hiring spans from interns to executive level hires, Bruya says.

“They’re excited,” Bruya says of young women interns. “They don’t see that there’s a limit to the opportunity that they have. It’s awesome to see that.”

In a report last year, Catalyst Inc., a global nonprofit that works with more than 800 companies globally to accelerate women into leadership, said women made up 54.3% of all employees in the U.S. financial and insurance sectors. Of the 13 nations surveyed, only France reported a higher figure, at 56.6%.

O’Mary, like Bruya, is also based in Spokane. She’s a senior vice president and managing director of wealth management and advisory services who has spent six years of her 18-year banking career at Washington Trust.

She says it’s an exciting time to be a woman in not only corporate America but in banking.

“With what’s happened over the last year with COVID and with social unrest, people are taking notice and looking for talent,” O’Mary says.

However, she credits Washington Trust for realizing the importance of having a more diversified employee pool long before the arrival of a pandemic.

“We all have amazingly talented women that work for us,” she says, “I think we take really special care in seeking those women out and mentoring them and showing them possibilities for career paths and a bright future.”

O’Mary says it’s vital for the financial industry at large to have a diverse workforce.

“Once the man was the financial planner and the wealth advisor, and he was talking directly to the man across the table because he took care of the money,” she says. “Well, that’s not necessarily the case these days.”

As for Stewart, 61, she was hired four and a half years ago by the bank. Based out of Seattle, Stewart is a vice president and private banking team leader with 39 years in the banking industry.

“I was hired as private banker, and a year and a half into my role, I was asked to lead the team,” Stewart says. “It certainly wasn’t on my radar.”

Stewart thinks hers is a prime example of Washington Trust’s dedication to increasing the number of qualified women at leadership levels.

“It shows a commitment to promoting from within, and I too have done that with promoting two individuals — female – who are on my team,” she says.

Prior to her arrival at Washington Trust, most of her professional experience occurred at larger national banks in the areas of private banking and wealth management.

Stewart says if there’s anything she could change in her professional past, she would have heard more about Washington Trust “many years ago.”

“I had some friends who worked here,” she says. “But I really didn’t know enough to know how great a bank it is. I am delighted to be here, and this is my last stop.”

Stewart calls Washington Trust a mix between “the old school way of operating and new school.”

“It’s family oriented, they’re very caring, and I see more collaboration,” Stewart says. “It’s not all about production and numbers. There’s a team spirit, and I really do admire that.”

Says O’Mary, “If they will have me, I will be here until the day I have the opportunity to retire. I love this bank.”

O’Mary says she’s had the perspective of working for the company in its Spokane and Western Washington regions.

“The people are just amazing,” she says. “This bank attracts the best people that really give their heart and soul; they care about their clients and their communities.”

Concludes Bruya, “I recognize that that I’m the chief HR officer, so people may say that I’m just saying it, but I’m not. I truly believe in the values that Pete Stanton and Jack Heath espouse as the top two leaders of the bank.”