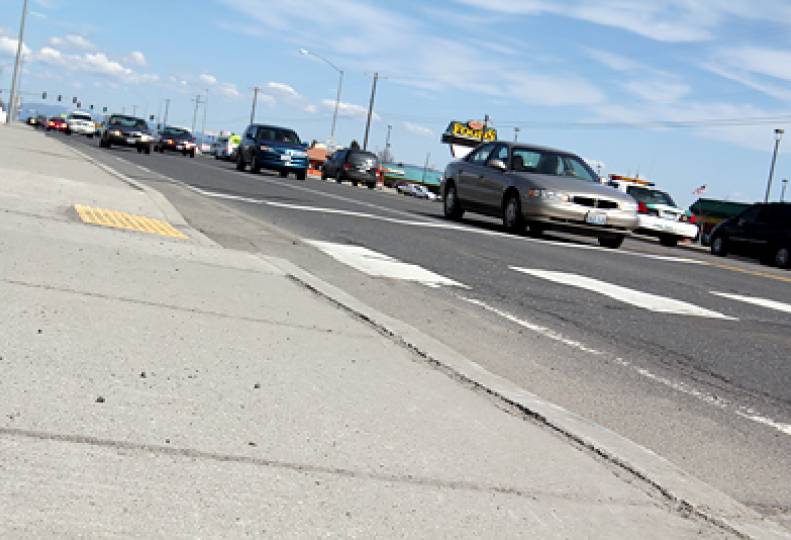 The West Plains-Spokane International Airport Transportation Study, a draft of which was completed earlier this spring, highlights suggestions to resolve traffic congestion and to add pedestrian safety enhancements along the U.S. Highway 2 corridor through Airway Heights, says Eve Nelson, a senior planner with SRTC who was involved with the project.

Nelson says the main intent of the study, in addition to recommending future transportation projects that could be needed as the West Plains grows, is to provide opportunities for local jurisdictions to implement the study's findings into future construction projects.

"This area is slated to experience pretty robust development in the future, and traffic congestion is a problem," Nelson says. "Our hope is that some of these ideas will trickle into (local jurisdictions) comprehensive plans and be implemented."

Nelson says one of the study's higher-ranking recommendations is the possible addition of a new three- or five-lane minor arterial south of U.S. 2 to provide an alternative east-west travel route in the area.

"One of the leading concerns from citizens is that there are very few alternates to U.S. 2," she says.

Another new roadway alternative identified to accommodate projected growth on the West Plains is what's being called the Northwest Connector, which would be a new two-lane rural arterial from Nine Mile Dam to Trails Road, which borders the north side of the West Plains, the study draft says. Also outlined as suggested improvements is the widening of U.S. 2 and Trails and Hayford roads.

Public transportation recommendations in the study include the addition of a park-and-ride facility near the Interstate 90-Medical Lake interchange and the creation of a fixed-loop bus route that connects Medical Lake, Cheney, and Airway Heights, Nelson says.

In addition to improving public transit to destinations on the West Plains, Nelson says that supporting non-motorized forms of travel is another key component of the study. She says identifying safe routes for pedestrians and cyclists through Airway Heights are a major concern because the city's main street is a highway with high travel speeds.

"We heard a lot from people that they have difficulty walking in the community," Nelson says. "They feel unsafe being close to a high-speed arterial, and we're looking for ways to improve that."

She adds that throughout the course of the study, two public open houses were held to gather suggestions from community members. The public voiced concerns about improving safety at intersections, creating non-motorized connections to downtown Spokane, and installing other traffic-calming devices to make Airway Heights a safer and more livable area, Nelson says.

Nelson says the WP-SIA study was initiated in 2008 after a memo to SRTC from the airport expressed concerns about the I-90-Geiger interchange's ability to keep up with growing transportation demands. Other safety issues on the West Plains also had previously been identified as needing to be addressed, she says.

The West Plains is bordered by I-90 on the south and Trails Road to the north. The east and west boundaries are Grove and Brooks roads, respectively.