After another delay, work may be back on track soon 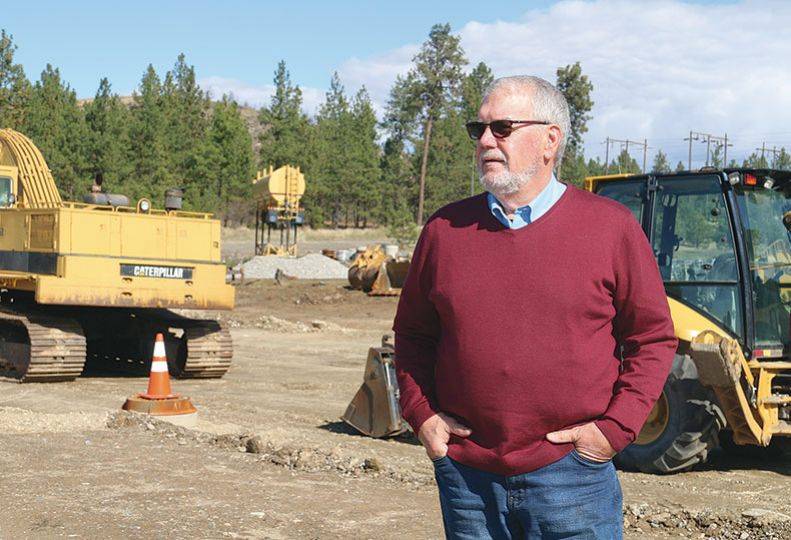 -—File
Pete Rayner, shown here on the Beacon Hill site in 2019, has been working to develop the hillside near the Hillyard neighborhood for more than 20 years.

Developers behind the long-envisioned but chronically stalled Beacon Hill planned unit development say the first phase of housing construction plans should be back on track in coming weeks, when the pumps that will supply water to the site are installed.

The first phase, known as the Vistas at Beacon Hill, located at the northeast corner of Havana Street and Longfellow Avenue, is expected to include the 140-unit Beacon Apartments complex, about 110 townhome units, and about 20 single-family homes, says Buth, who owns the Vistas site. He estimates the construction value for the apartments and townhomes at $40 million and plans to issue a call soon for contractor bids.

“We expect the booster stations to be done by Nov. 1,” he says.

The booster stations will pump water uphill to serve the development.

“We need that water,” Buth says. “That gives us (ability) to go vertical.”

He adds that engineering plans for the initial phase are under review by the city. “When that approval comes back, we can start construction,” he says. “Hopefully, it’s just a few weeks away, or in the worst case, in the spring.”

Rayner says he also hopes to see construction underway by spring on the first part of a development known simply as Beacon Hill, which is just east of—and uphill from—the Vistas site.

Rayner adds, however, that he hasn’t determined the mix of multifamily and single-family housing that could total about 300 units separate from Vistas.

He says those Beacon Hill development sites include 7 acres approved for multifamily development with a density of up to 30 units an acre uphill from the Beacon Hill Events facility at 4848 E. Valley Springs Road, 25 lots along Longfellow, and another parcel in a “unique bowl” that could accommodate at least 50 living units.

Custer Street also will be extended south of Valley Springs Road, along the east side of the Vistas, Buth says.

“To finalize the plat, we’re getting the roads and streets done first,” Buth says. “Simultaneously, we’re working on plans for the buildings.”

The Journal last reported on Beacon Hill in early 2021, when developers said work was stalled due to pandemic-related construction slowdowns. Since then, they’ve been making progress on infrastructure, including constructing the water booster station near an existing 5-million-gallon water tank, installing water lines, and road work, Rayner says.

More recently, the delivery of booster pumps ordered for the booster station in February was delayed until late this month, Rayner says. The booster station is needed because the water supply and pressure must meet fire codes before building permit applications can be filed.

While the Vistas development hasn’t changed from earlier versions, Rayner’s previous plans for the transition from multifamily development to single-family homes on parcels along the east side of Custer remain fluid.

“The market is so different than four yours ago,” he says. “I’m meeting now with builders who say they have no lots to build on. We’re evaluating how we can provide missing housing.”

Rayner says he also would like to see some commercial uses included to complement the mix of residential uses.

“We’re looking more at the model of Greenstone than at an all-single-family subdivision,” he says, referring to the Liberty Lake real estate development company behind the 77-acre Kendall Yards community on the north side of the Spokane River, near downtown. “Picking perfect neighbors to create long-term value and fit in a master plan—that’s the challenge.”

Rayner adds that he plans for the Beacon Hill community to have access to recreational amenities, including hiking and biking trails and a golf cart path to the Esmeralda course.

Developments over the 200 acres collectively known as Beacon Hill eventually are expected to include about 3,000 residential units.