Company aims to begin mass production soon, be profitable in 2024 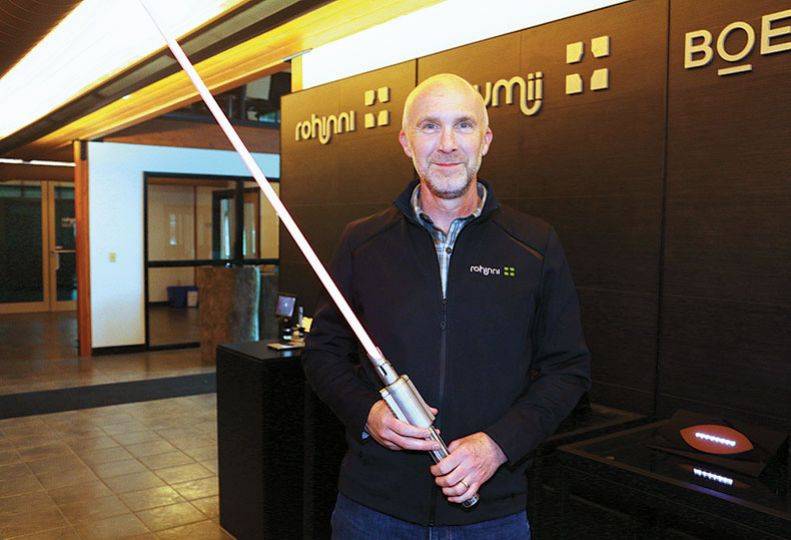 -—Mike McLean
Rohinni Inc. CEO Ryan Cameron holds a lightsabre that employs the company’s LED technology. A studio prop company contracts with the Liberty Lake company for the technology for the device.

Liberty Lake-based micro and mini LED lighting technology developer Rohinni Inc. plans to release a new production machine next month to a partner in China, BOE Technology Group Co., which has signed a letter of intent to buy hundreds of the machines for use in manufacturing advanced electronic display panels.

Rohinni, which developed LEDs several years ago that are as thin as paper and have the ability to produce more light using less energy than conventional LEDs, has since developed automated placement technology that’s morphing it into a robotics company for installing the tiny LEDs and other micro components.

BOE will use the manufacturing technology to place LEDs in display panels through a joint venture with Rohinni called BOE Pixy and will be the first to use Rohinni’s new r/series placement machine.

“We’ll be releasing this to the market and delivering one to our lead customer, and the intention is to start mass production of this in the first half of 2023,” says Ryan Cameron, company CEO.

Rohinni also has partnerships with global companies that use its lighting technology in keyboards, logo applications, and automotive accents.

The company even has an Obi Wan lightsabre in the display area of its lobby.

“We’ve done some work with a studio prop company, and they like our ability to manufacture unique lighting products, and so every now and then they’ll reach out to us,” Cameron says.

Rohinni’s new r/series placement machine is housed in a black box about the size of a minivan, but weighing in at 15,000 pounds, it’s more than three times as heavy. “Which is why it’s staying in China,” Cameron says.

The device can place 100 components as small as a grain of sand per second, which Cameron says makes it a third faster than any competitor. That means fewer machines will be required to make a given number of components, resulting in lower costs.

Cameron anticipates the rollout of the new r/series placement machines will advance the 9-year-old company beyond the startup phase.

The Journal last reported on Rohinni in July of 2021, when the company hired Cameron, a semiconductor industry veteran, as its CEO, replacing Mathew Gerber. Earlier this year, the company moved to a 28,000-square-foot building at 23221 E. Knox, in Liberty Lake, from smaller quarters in a retail building in the Riverstone development in Coeur d’Alene.

With the move, the company nearly tripled its lab space.

While Rohinni’s hardware and proprietary software is engineered here, the placement machines will be manufactured overseas.

“This is really a research-and-development and technology center,” Cameron says. “We chose to outsource our manufacturing to suppliers that had experience. We add value through our technology and intellectual property.”

Rohinni has what Cameron describes as over 160 patent assets. “They’re everything from disclosure and just starting the process to fully granted over multiple geographies,” he says.

The company protects its intellectual property in part by segmenting its supply chain so that no single manufacturer makes all the critical components.

“We have a key supplier in Germany, and one in China,” Cameron says. “We have a subsidiary company that we created in China called Lumos Semiconductor, and that is where all of these critical pieces come together and are safely integrated.”

Although Rohinni has been focused on placing tiny LEDs in a variety of products, the company also is exploring how it can use its technology in the semiconductor market in the U.S.

“Our technology doesn’t care if we’re placing an LED or placing a semiconductor component,” he says.