What’s happening with: Radio Park on the South Hill 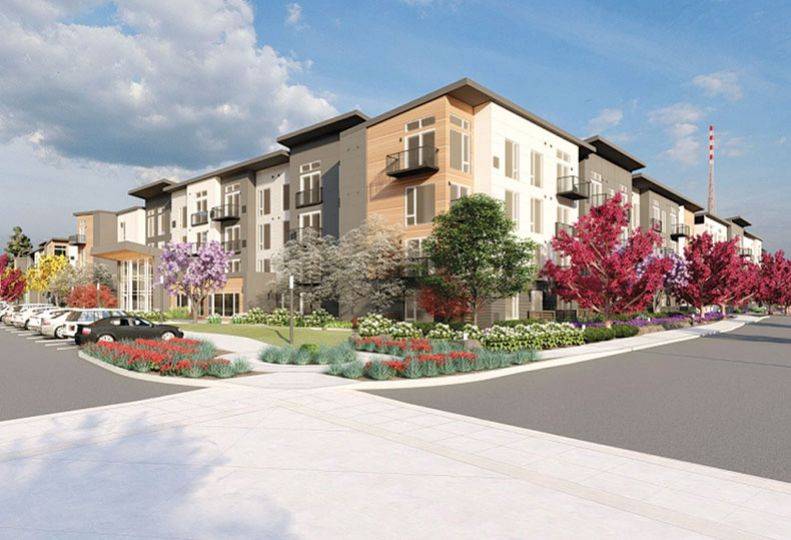 -—Bernardo Wills
The envisioned first phase of the Radio Park development is expected to include 153 living units, as well as a four-story parking structure.

As the Journal reported early in 2021, the building permit application for the first of two planned phases of apartments has passed the plan-review stage, although the permit hasn’t been picked up by the developer yet.

That approval was extended on Sept. 14, at the request of Yost Gallagher Construction LLC, of Spokane, the contractor on the project. It will expire on April 9 if construction isn’t underway by then.

Kirstin Davis, communications manager for the city’s Public Works and Community and Economic Development, says, “Radio Park is approved and ready to be issued, so the ball is in their court.”

The development site, located at 5222 S. Regal and known informally as the old KXLY site, is west of the Regal Plaza shopping center and south of the Southeast Sports Complex. There are no longer any broadcast structures on the Radio Park site, although two antenna towers are on the 11-acre parcel of land to the west of it.

The first phase of the Radio Park development includes a four-story apartment structure, named The Frequency, on plans submitted to the city. The 180,100-square-foot Frequency structure will have 153 living units and will be wrapped around a four story, 84,300-square-foot parking garage.

A second apartment phase will include similar structures to bring the total to 307 living units and nearly 500 parking stalls.

Guenzel says financing is expected to be secured through the U.S Department of Housing and Urban Development early next year.

“Once we get financing finalized, we’ll be able to kick it off,” he says.

SRM Development LLC, of Spokane, is a development partner in the first phase, Guenzel says.

The design hasn’t changed since the current permit was applied for, although the developers are looking for ways to reduce expenses in light of rising construction costs.

Guenzel says the construction value for the first phase of apartments currently is estimated in the $40 million range, which is 25% higher than originally reported.

“With interest rates and costs going up, we’re having to rethink whether there’s any way to cut costs,” he says.

He adds, however, that rents also are up, which could help offset cost increases.

In recent years, the greatest barrier to people wanting to enter the homebuyer market was lack of supply, he explains. Now, however, with recent and anticipated increases in interest rates, it’s even more difficult for people trying to enter the market, he adds.

“We feel the apartment market is going to continue to be strong, because it’s the only product out there for many people,” Guenzel says.

The apartments will be located on the west half of the development site. Guenzel says retail development is planned closer to Regal Street.

“We need to get the apartments going, and we think there’s demand for retail too,” he says. “We have a national restaurant in final negotiations, and renewed interests for smaller retail development.”

Mixed-use development long has been envisioned for the Radio Park site, including earlier iterations named Radio Tower Village, and KXLY South Complex, with the Journal first reporting that development was poised to start there in early 2017.

Signage for Radio Park wasn’t visible at the development site as of Friday, but green sewer pipe was stacked near the Regal Street side of the property, and Guenzel confirms the conduit is destined for Radio Park infrastructure.

He says infrastructure work may begin this winter or early spring.