What's next for N-S freeway?

Focus now is on $342 million in work between Francis, river 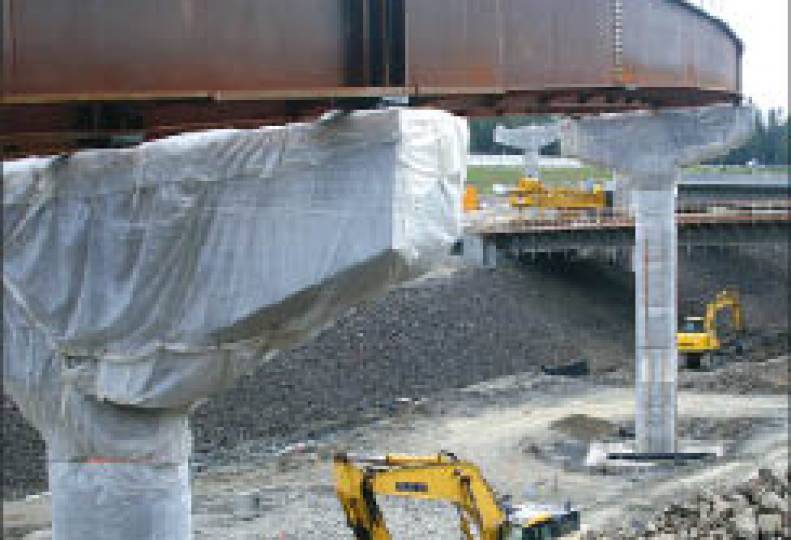 -—Staff photo by Jeanne Gustafson
Work continues on portions of the freeway, including this work near its planned interchange with U.S. 2.

With federal funds committed for the final section of the North Spokane Corridor's most northern leg, the Washington state Department of Transportation now is seeking money for seven projects that would comprise the next three-mile segment of the freeway, which is expected to cost $370 million.

As part of that effort, Greater Spokane Incorporated is lobbying Congress for funds to begin that work, and included a request of $35 million in its 2011 federal agenda for one of the seven projects.

"The next big push is the next segment to the south between the Spokane River and Freya-Francis," says DOT spokesman Al Gilson.

For now, the DOT is considering building just four of the eight lanes ultimately planned for that stretch, which would reduce the cost by about $28 million initially, with the idea of adding the other four lanes and related infrastructure later as more money becomes available, Gilson says. That section of the freeway would be built from the corridor's current southern point, just north of Francis Avenue at about Freya Street, south to just north of the Spokane River, where it would connect with Greene Street.

So far, about $612 million has been spent on what is estimated long term to be a $3 billion cost to complete the north-south freeway from U.S. 395 on the north to Interstate 90 on the south, Gilson says. All of the construction that has been done or is under way is north of Francis, and the DOT plans to seek a second round of bids early next month for construction of a section of roadway that will complete the five-mile northernmost section of the corridor between Francis and the Wandermere area. (See story page B1.)

After that, the next five-mile section of the freeway will follow a path parallel to and east of both Market Street and the BNSF Co. rail lines in the Hillyard area.

The next connection would be at Wellesley Avenue, where a roundabout would be built beneath an elevated stretch of the freeway, with on-ramps and off-ramps connecting the roundabout and the freeway lanes.

Gilson says all of that work would be done in a series of seven projects costing a combined $342 million, and would involve construction of just two lanes of traffic in each direction rather than four.

In the first of the seven projects, DOT would build the roundabout and related improvements at Wellesley Avenue. That $54 million project, including a bridge to carry the railroad tracks over Wellesley, would be done first. DOT believes it can fund the first project with state money and through savings on other projects.

In the second, $33 million project, a new bridge would be built to carry Francis over both the railroad tracks and the new freeway lanes, along with intersection improvements at Market and Freya. The $35 million in federal funds Greater Spokane Incorporated is seeking would go to that project.

The third project would entail shifting the BNSF tracks slightly to the west between Francis and Olympic avenues at an estimated cost of $56 million.

In the fourth project, the freeway lanes would be built from the current southern terminus of the corridor south to Wellesley, at a project cost of $32 million.

The fifth project would involve reconstructing portions of Greene and Market from about Euclid Avenue south to the river, where the freeway would connect with Greene. That project is estimated to cost $38 million.

The sixth project, which is expected to cost $59 million, would entail shifting BNSF's railroad tracks slightly to the west between Wellesley and Cleveland avenues, and making other improvements.

The seventh project would be the largest, at an estimated cost of $70 million, and would involve construction of four lanes of the freeway between Wellesley to a point near the Spokane River, including bridges to carry those four lanes over Wellesley and the southbound lanes over Greene.

When money for the work will be available, and where it will come from, remains to be seen, Gilson says.

"Of course it requires funding, and we are looking to state and federal lawmakers for any opportunities they might come up with," Gilson says.

Even at $370 million for the eight-lane version of the freeway, the current projected cost of the Francis-to-the-river section is about half what had been anticipated based on a 1998 design of the project, Gilson says.

In recent years, several key changes were made to save money on that phase of the project, particularly at the corridor's intersections with Francis, Wellesley, and Euclid avenues and also involving the railroad tracks, he says. Among the reasons for the changes were rising construction costs, especially related to the large retaining walls and bridges that would have been needed under the earlier plan's inclusion of beneath-grade freeway lanes along portions of that stretch.

In addition, BNSF expressed concerns about having below-grade sections of the freeway section next to a rail line, because retaining walls needed to make that possible would require tie-back supports to be installed beneath the tracks, Gilson says. The railroad also wanted more space to be left along the line so that an additional set of tracks could be added later.

While the 1998 design included mostly below-grade freeway there, and envisioned that the freeway would be west of the tracks, the design finished in 2008 elevates the freeway lanes in several places, leaves it at grade elsewhere, and positions it to the east of the tracks, eliminating the need for several railroad bridges, Gilson says. In all, the changes cut the price tag in about half, he says.

When that stretch of freeway is completed, the overall corridor will stretch 8.5 miles, almost from the Spokane River to U.S. 395 at Wandermere, and would include some sections of four- and six-lane freeway.

Currently, Graham Construction & Management Inc., of Spokane Valley, is constructing a two-mile, four-lane section of the freeway between Wandermere and U.S. 2, under a $37.5 million contract. Graham also is working on a $42.8 million project to lower the grade of U.S. 2 in the vicinity of the new freeway's interchange there, and to build six bridges associated with the interchange.

Once those projects are done, late in 2011, the northernmost five miles of the corridor will be completed, Gilson says.

Long-term plans call for the freeway to run from I-90 near the Thor-Freya interchange north about 10.3 miles to U.S. 395 at Wandermere. Once the corridor is completed, it will be designated as U.S. 395, and Division Street, which currently carries both U.S. 395 and U.S. 2 in north Spokane, will continue to be designated as U.S. 2.