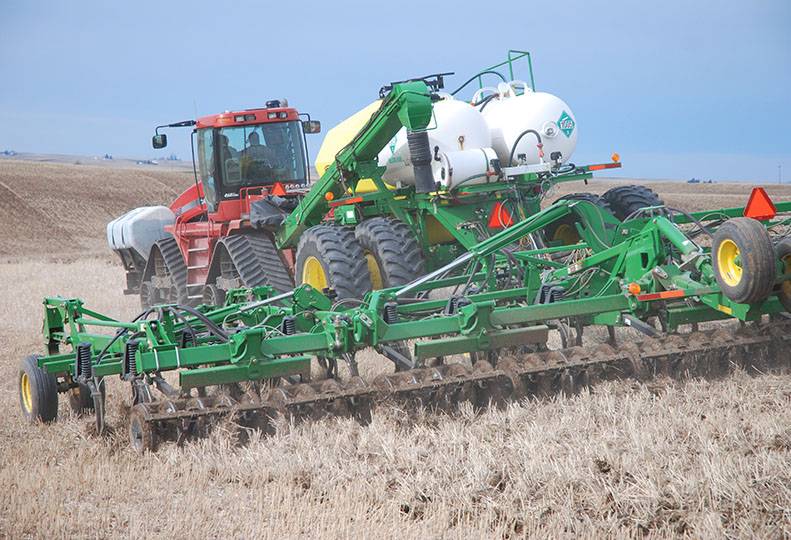 - –Washington Grain Commission
A farmer performs direct seed spring planting near Reardan, Wash. The amount of wheat planted in Washington this year is up slightly from last year.

With the second relatively dry winter in a row under their belts, Inland Northwest farmers are gearing up for another spring season, with some saying deep freezes and a lack of winter moisture have hurt crops again.

Glen Squires, CEO of the Washington Grain Commission and the Washington Association of Wheat Growers, says, however, slightly more wheat is planted in Washington state this year—about 60,000 more acres than in the previous growing season.

“That’s not a huge fluctuation,” he says. “Any year, acres are going to go up and down a bit.”

Squires says that currently, the price of wheat is about $6.80 a bushel, compared with about $8 a year ago. He says that the winter before last was dry, which hampered production.

“Our winter moisture was down, and we had some really hard freezes that damaged some of the crops,” he says. “Again, that’s sporadic; different parts of the state were hit worse than others.”

“Right now, I’m not expecting the crop will be a whole lot different than last year,” he says.

It’s mostly the lack of rain impacting the state’s wheat production, not the lack of snowpack, Squires says, because most of the wheat grown in the state is dryland, which is dependent on rain.

“In Washington, there’s about 250,000 acres of irrigated wheat, but there’s 2.1 million acres that grow from the rain that falls from the sky,” he says. “The snowpack affects water tables, so that has an impact on irrigation, but the greater overall impact is whether it rains or not.”

“The recent rains we’ve had … are crucial,” he says. “We’re going to need some of those in April and May as well.”

“Some areas look really good, and some areas got winter damaged,” he says.

He also says that in some places, because of the warmer winter, the current wheat crop is about two weeks ahead of schedule.

“The crop starts growing when it gets warm,” he says. “Spring seeding occurred earlier this year … that could be good or bad; the concern is if it starts getting really hot and dry.”

“When (wheat) doesn’t get winter chilled, it can become a problem  and can reduce the yields,” he says.

However Jim Hermann, co-owner of RimRock Ranches farm in Genesee, Idaho, says that area actually is currently above its average for precipitation.

“I think we just got it more in the form of rain than snow,” he says.

Hermann says the low snowpack hasn’t really affected his farm, as its dryland.

“Our yields in 2014 were down maybe 15 percent from normal,” he says. “It just depends on what we get … as long as we get those June rains, we’re in pretty good shape.”

Hermann says, however, that some farms had to reseed their fall wheat after cold temperatures in December and January.

“That’s probably impacting things more than anything … spring grain doesn’t yield as high as fall-planted grain,” he says. “I know that west of Spokane and the Colfax area was hit pretty hard.”

Hermann estimates that about 15 percent to 20 percent of the wheat around Genesee has been reseeded. His own farm hasn’t needed to reseed, he says.

Squires says that the current wheat price, $6.80 a bushel, is pretty close to breakeven for some farmers. The farmer receives a lower price because of the expense of transporting the wheat, so it’s more around $6.00, he says.

“Down around that $6 range, for some farmers, that is breakeven,” he says. “But that breakeven price is pretty hard to identify, because every producer has different expenses.”

Meanwhile, a $26.4 million project is underway to build a grain rail loading facility near Medical Lake. The facility will have a capacity of more than 2 million bushels and a 110-car load and unload grain elevator, says Keith Bailey, CEO of Odessa, Wash.-based Ag Ventures NW LLC, which is a member of HighLine Grain LLC, the organization that owns the project.

“We’ve poured the concrete and done all the excavation for the lower platforms,” Bailey says. “Everything below ground is constructed, with the exception of equipment.”

The project is expected to be completed later this year, Bailey says.

The next step is to start constructing the rail lines around the facility, he says. Vigen Construction Inc., of Grand Forks, N.D., is the contractor on the project, he says.

The bulk of the financing for the project is coming from a loan from Spokane-based agricultural lending cooperative Northwest Farm Credit Services, Bailey says. The remainder is coming from the members of HighLine Grain.

Bailey says he expects the facility will employ four to six people once it’s completed.

“As shippers, we’ve been economically challenged to compete in the marketplace,” he says. “Freight is a big part of cost.”

Squires says a factor that negatively impacted the industry recently was the West Coast port slowdown, due to a labor dispute between the Longshore & Warehouse Union and the Pacific Maritime Association, which negotiates and administers agreements with the union on behalf of the ports.

“As I understand it, they’ve come up with an agreement, but it hasn’t been ratified by the full union membership,” he says. “That slowdown … negatively impacted our entire region.”

The slowdown mostly affected crops such as apples and potatoes, Squires says.

“There was all kinds of product that was just sitting, that rotted,” he says.

However, most wheat is exported by bulk, Squires says, not by container, so that industry was slightly less affected, because the dispute dealt with crops that are shipped by container.

“However, there are markets that purchase wheat by container,” he says. Squires estimates, from talking with various transport facilities, that the slowdown was costing the wheat industry $1.5 million a month in lost business.

“Our markets have been pretty stable,” he says. “I think compared to last year, our exports are down 11 percent, which is not too bad … the thing that’s challenging—and something we don’t have any control over—is the value of the dollar, which basically makes our wheat more expensive to buy.”

Kim Davidson, co-owner of Spokane-based Davidson Commodities Inc., a wholesale distributor of so-called “pulse” crops and marketing partner of Genesee, Idaho-based Pacific Northwest Farmer’s Cooperative, says that most of the co-op’s farmers grow wheat and barley, and use chickpeas and other legumes as rotation crops.

Davidson says that pulse crops such as chickpeas and lentils have been on the rise here for a few years.

“One of our core missions is to connect people to your farms and bring locally grown legumes and chickpeas to local restaurants and schools,” she says.

Davidson says some area school districts, such as District 81, are using the co-op’s crops in their school lunches.

“District 81 is going to feature our lentils on their menus as a meal of the month,” she says. “Anytime you get traction like that, it’s a good thing.”