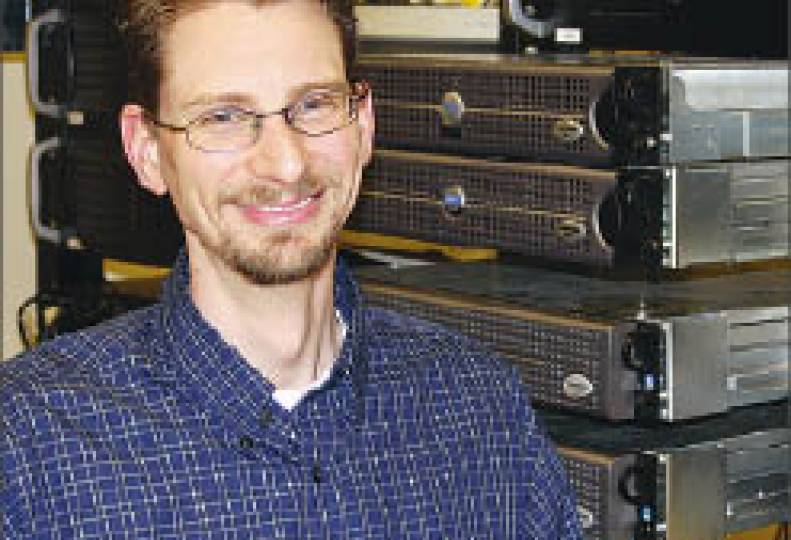 -—Staff photo by Jeanne Gustafson
Kirt Runolfson says he took business courses along with computer studies to help him as he launched a high-tech company.

Spokane-area universities say they're finding their computer-science programs are doing more than simply producing workers for the high-tech industry—they're also churning out entrepreneurs who are launching their own ventures and, in turn, are creating more jobs for grads.

Steve Simmons, a longtime computer-science professor at Eastern Washington University, says he knows of more than a dozen tech companies here that have been launched by local graduates, and those ventures now employ people numbering in the hundreds.

Although most EWU computer-science students intend to pursue jobs with established companies, about 10 percent of such grads end up starting their own businesses, a realization that prompted the computer-science department to coordinate its efforts with EWU's School of Business to help prepare techies who have an entrepreneurial bent.

"Product companies tend to have the potential to get very big," he says.

Among the companies that have been launched here by local computer-science grads are small operations such as Spokane services company Dentone.net LLC and larger, 100-plus-employee concerns like Cheney-based XN Technologies Inc., Simmons says.

Some of those companies, such as XN Technologies, were birthed by EWU grads, but others, including Dentone.net, were launched by computer-science grads at Gonzaga University. Whitworth University also has graduated entrepreneurs who have started tech ventures here.

Simmons says the EWU computer-science department's effort to collaborate with the school's business programs is intended to give technology-oriented students business acumen for such ventures.

"We have the partnership degree program with the College of Business at Eastern," he says. Through cooperation with the business program, students now can take courses in entrepreneurship, marketing, and venture capital at the same time they are studying computer science, he says.

Some business-minded computer-science students choose to enter a business-plan competition offered in coordination with Gonzaga through its Hogan Entrepreneurial Leadership Program, Simmons says. Computer science students often team up with business students to compete for the $10,000 top prize, he says.

For some computer science graduates, including Kirt Runolfson, who started a predecessor of Interlink Advantage Inc. here in 1994, the desire to operate a business emerges before they go to school.

Runolfson says that after working for some time as an electrical engineer, he went back to school at EWU to round out his computer knowledge and to take business classes he believed he would need to launch Interlink, an Internet and network services company here.

The work just grew, Runolfson says, and he began adding employees. "At some point I had to hire people to help with the easier aspects of the job," and the company now employs a staff of 10, he says.

Runolfson often refers his employees to EWU to supplement their practical knowledge with a greater understanding of computer science theory, he says.

One of the most prominent examples of a high-tech company started here by local grads is XN Technologies, in Cheney, Simmons says. It was launched in the 1990s by a group of EWU computer-science graduates, as a hardware and software system development concern, designing systems for handling audio and video for clients such as the White House. In 2007, Richardson, Texas-based tech giant AMX bought XN Technologies. It still has a campus outside of Cheney, and employs more than 100 people there. Simmons says the company hires a lot of EWU graduates.

Before the acquisition, Al Hale, one of the founders of XN Technologies, spun off another company, XN Avionics, as a communications and navigational electronics company. Now called XN Air LLC, the company also offers fixed-base operator services at Spokane International Airport.

Another company started here by a local computer-science student was A Perfect Web Inc., which was launched in 1997 by Whitworth graduates Sam Fleming and Brandon Tanner, and later was acquired by Spokane-based software developer Next IT Corp.

Fleming, who now is vice president of products and services for Next IT, says A Perfect Web made its mark by developing a software tool that allowed Web site owners to more easily update their own Web pages, and created a strong Web-based application development team here.

Next IT bought the company in 2004 as a way to bring in the technical expertise and entrepreneurial spirit of the team of 10 developers at A Perfect Web, Fleming says. At that time, Next IT and A Perfect Web employed a combined 40 people. Next IT now employs about 140 people, including a number of the original 10 employees from A Perfect Web, he says.

For Gonzaga graduate Andy Dentone, launching a computer-science related business made a lot of sense because the overhead in starting such a company is low, he says. Dentone started Dentone.net LLC, which offers Web-site development, design, and hosting, in 2004, and since then has started pandawebworks.net, a related company that focuses more on Web site design.

Dentone says he does the back-end site programming himself, and contracts with five other people here as needed for sales, design, and copywriting for his clients. In addition, Dentone's wife, Laura, who is a computer engineer, does much of the testing for the company.

Dentone says he has added about 60 new clients in the past 12 months, and now has more than 200 clients overall.

Although he has considered opening a storefront somewhere, Dentone says that with his particular line of work, the computer and Internet are ready business-to-business tools that allow him to work with clients anywhere they may be—and anywhere he is—via instant messaging, e-mail, and a free Internet-based phone service called Skype for phone meetings. In town, he frequently meets with clients at their offices, at his home-based office, or at a local bakery.

For some, such as former Gonzaga and EWU student Jack Strong, there's an obvious niche to be filled and they jump in. Strong owns JD Strong Consulting, which Simmons asserts is "probably one of the most advanced Apple consulting specialty companies" in this area.

Strong says that even when he was working full time for Spokane County, he saw an opportunity in specializing in the Apple computing side of personal computer technology.

"My feeling was that it was up-and-coming," Strong says.

He built a business providing consulting and services for companies here, particularly those that have an information technology specialist for their Windows-based networks, but also use Apple Macintosh systems for their graphics departments and need support for those, or help in making Apple and Windows equipment co-exist in the same network.

He employs two other people there, and plans to hire another computer technician soon.

Simmons says that there will continue to be a lot of fertile ground for entrepreneurially minded students, because technology changes so rapidly. Right now, for example, students are very excited about mobile technology and network systems security issues, he says.