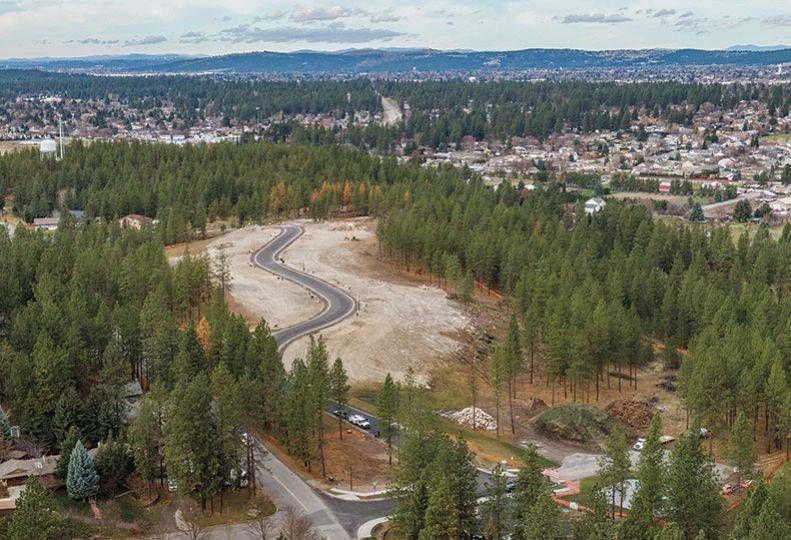 -—Century 21 Beutler & Associates
The Whitetail Ridge development is located south of Spokane Valley, between state Route 27 and Sullivan Road. When fully developed, it will have a total of 119 houses.

Patricia O’Callaghan, a broker at the downtown Spokane office of Century 21 Beutler & Associates, says Humphreys approached her about four years ago for aid in finding a builder for the 72-acre development.

“He bought it over 30 years ago,” she says. “He knew he wanted to be a good steward of this land.”

O’Callaghan reached out to real estate broker Todd Spencer at the Liberty Lake office of Avalon24 Real Estate, with whom she’d worked previously, and Justus Snyder, president of Worley, Idaho-based Edge Homes NW Inc. Spencer and Snyder had worked together on the Twisted Willows development on the South Hill, which was completed in 2020.

“It was just kismet,” O’Callaghan says.

The development is located just south of Spokane Valley, east of state Route 27 and west of Sullivan Road.

Nine homes have been constructed since January, Spencer says. Phase One will consist of 24 houses. In total, Whitetail Ridge will include 119 houses when fully developed.

Customization is a major selling point for the development, he contends. Homeowners work with Edge Homes to customize the design of their house.

“In Whitetail Ridge, the homeowner gets to design their house. It gets as specific as they need,” Spencer says. “Most developments, you can get little changes. We’re moving walls, we’re designing to what the buyer needs, not what the builder wants. They’re paying great money for a house; they should be able to get what they want.”

The gated community doesn’t have age requirements, but many older buyers are interested in downsizing, she says.

Spencer says the development site has many trees, green spaces, and walking paths.

“The vision of the development was to keep the natural feel,” he says. “There are still whitetail deer all over the place up here. Two weeks ago, an eagle was flying around here … but we’re eight blocks from 32nd and Pines.”

The process of establishing Whitetail Ridge has been fraught with challenges, O’Callaghan says.

“We’ve been through construction prices, COVID, interest rate hikes,” she says. “It takes a sturdy developer to have the bandwidth and to keep momentum and a good attitude about the market.”

“If we’d started sooner, I think we’d be done with Phase One,” Spencer says.