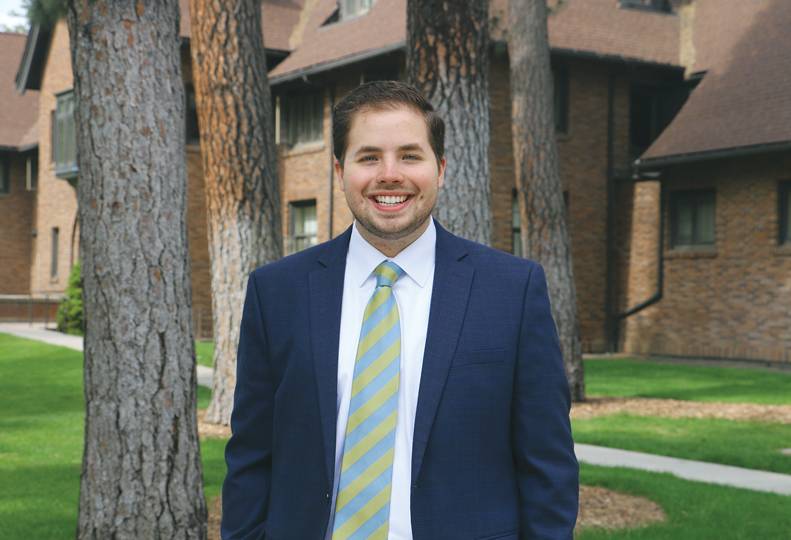 A Whitworth University student duo has founded a local chapter of a national organization that trains college students to create free, weeklong camps for children whose parents have cancer.

Kyle Schmit, co-founder of Camp Kesem at Whitworth, says he heard about the concept from his academic adviser a few years ago, but at the time, he wasn't interested in establishing a chapter at the university north of Spokane.

Then, last spring, his father was diagnosed with brain cancer.

"As a 21-year-old, I had a pretty good support system, and it was still something very difficult to deal with and to try to understand," Schmit says. "I thought, what if I was 6 years old and my dad was diagnosed with brain cancer?"

Schmit says children who are dealing with a parent's cancer miss out on some typical childhood experiences. Camp Kesem aims to give them space to be carefree while surrounded by peers, Schmit says.

"Every kid there is going through the same thing," he says. "A lot of times, cancer forces them to grow up too fast, and they don't get to have a full, normal childhood, because they're busy visiting their dad in the hospital or needing to isolate because their mom's doing chemo."

While a location for the camp itself has yet to be selected, Schmit says he envisions using a site like that of Camp Reed, the YMCA of the Inland Northwest summer camp north of Spokane.

Camp Kesem National Organization, based in Los Angeles, trains student leaders to be counselors for summer camps that serve children ages 6 to 18 who have lost a parent to cancer, have a parent undergoing cancer treatment, or have a parent who is a cancer survivor.

There are 137 chapters throughout the U.S., according to the Camp Kesem National Organization website. However, prior to Camp Kesem at Whitworth, there were no other chapters in the greater Spokane area, Schmit says. The nearest Camp Kesem chapters are located in Seattle.

Each chapter of Camp Kesem operates independently from the national organization. Schmit says Whitworth students will be responsible for 100% of the fundraising — about $30,000 — to host between 15 and 30 campers at the first camp in 2022.

"(The campers) all come from families where they're impacted by a parent's cancer, so there's oftentimes financial hardship associated with that," says Schmit, noting that fundraising activities will be the focus of the group over the next year.

"At some point, there will probably be a large fundraising dinner or banquet, where we'll try to bring a lot of the Spokane community in and try to get the whole community behind the effort," Schmit says.

The annual camp typically lasts five days, including four nights. Schmit says he expects the first Camp Kesem at Whitworth will take place next summer. Attendance will depend on how much the chapter can raise, but he hopes up to 15 campers will be able to join the inaugural summer camp.

Schmit, a graduating senior, says that as soon as he decided to establish a branch of Camp Kesem at Whitworth, he knew he needed a succession plan. He's graduating with a Bachelor of Business Administration major with a concentration in finance, and will soon leave the Spokane area to start a job with the Seattle office of financial consultancy Verus Investments.

Schmit began asking around for recommendations for a co-founder.

"She had been actively looking for some way to serve the community or be involved in something," Schmit says. "We met and talked about it, and she seemed like a really good fit. She's carried a lot of the effort and has been involved in every step of the application process, every step of finding community members to support us."

Schmit and Brown completed the Camp Kesem National Organization application process, established the local chapter, and received approval from Whitworth's student government body to create the chapter as a club.

"It took a lot of effort to get to the point where we were approved by the national organization, because they have a pretty high standard," Schmit says.

Brown says that to receive approval from the national organization, Schmit and Brown had to prove enough interest.

"The application required us to get in touch with six local hospitals-cancer organizations, 25 businesses, 75 individuals, 50 interested students, three nurses, and two mental health professionals," Brown says. "I think I ended up emailing 100 businesses total just to see who would be interested in supporting us once we get started."

Fundraising will play a vital role in creation of the camp, Brown says.

The chapter aims to raise $30,000 over the next year to establish the camp through fundraising events, in-kind donation drives, and individual donations, she says.

Schmit and Brown have been working to create connections with local businesses and organizations such as Cancer Care Northwest and Providence Health & Services to spread the word to families that might be interested in the camp — a rather niche audience, Schmit observes.

He and Brown have put together an advisory board that includes a Whitworth trustee, a senior-level employee at GE Healthcare, a former CEO of a local company, and a handful of other Whitworth and Spokane community members.

Whitworth students will volunteer as camp counselors, Schmit says. According to the Camp Kesem National Organization website, all volunteers and staff undergo thorough background checks, interview processes, and training. Chapters are required to ensure a ratio of three student counselors per camper.

"There's a really high counselor-to-camper ratio to make sure that everyone is being well taken care of and getting all the attention that's necessary," he says.

Camp Kesem at Whitworth will ramp up over the next year. Brown and a to-be-determined co-director will lead the chapter. Schmit says student committees will be established to oversee fundraising, events, and planning of the camp itself.

"Altogether, I think we'll have five or six committees that are all looking at different things that need to be considered," Schmit says.

One of those committees will select the site at which Camp Kesem at Whitworth will host its annual summer camp. Schmit says the chapter has a list of potential sites but hasn't settled on one. The national organization requires campsites to be American Camp Association accredited and no more than four hours from the chapter's home city.

"It could end up being at any number of places," Schmit says. "We want it to be as close as possible while still being able to be outside of Spokane a little bit and out in nature."