Owner of former RAHCO operation to build unit a day 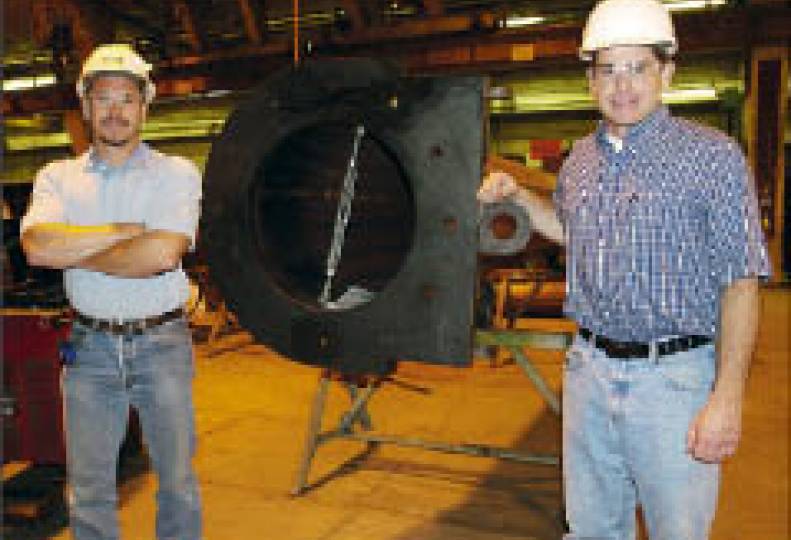 The company, MC Energy LLC, currently employs just five people and is contracting out fabrication needs to The Factory Co., the business Folsom owns at the sprawling former RAHCO property here, but he expects it to hire 20 to 30 more workers within the next year and to build its own manufacturing plant.

MC Energy's wind turbines have been in development for about two years, but the company only recently began marketing them. It has one demonstration wind turbine up and running in Mica, Wash., southeast of Spokane Valley, and has orders for four turbines, all of which now are in various stages of manufacturing, he says.

For now, MC Energy is offering two versions of its wind turbines, one capable of producing 15 kilowatts of electricity and another rated at 5 kW. Although either one would provide more than enough electricity to power most homes if the wind blew all the time, the company's turbines are far smaller than the towering commercial turbines that often stand 300 feet tall, can produce more than 2 megawatts of power, and have blades that sweep 300 feet in diameter.

Rather, MC Energy's turbines will be mounted to towers measuring 50 feet to 125 feet in height, depending on the need due to terrain, and will have blade sweeps of 31 feet in diameter for the 15 kW model and 17 feet for the 5 kW version. Later, says Folsom, the company will make somewhat larger turbines, with up to 100 kW of generating capacity.

"We studied nearly every turbine in the market," Higgins says. "Most of the 5 to 100 kW units are built outside of the U.S."

Says Folsom, "We're a locally based company using new technology. We've made the proper investment in this thing, and it's here to stay."

Folsom and Higgins say MC Energy's turbines have some unique design elements, for some of which the company has secured a provisional patent. The patent covers what they call the turbine's "self-governing systems."

While many wind turbines include electronic systems to turn the unit back into the wind as the wind shifts, called a yaw adjustment, MC Energy designed its turbine as a "downwind" turbine, meaning that the wind hits the back side of the blades and will automatically steer the blades to their optimum position to catch the wind. That design, says Folsom, minimizes electronic systems that can fail, making the turbines more practical for homeowners, farmers, and small businesses, which don't have their own utility repair workers.

Perhaps more importantly, however, is the way Folsom and Higgins designed the turbines to adjust to the power of the wind. They say most turbines are designed to shut down in winds over 40 miles per hour, to protect the equipment against excess rpms that can damage them. At that point, the turbines aren't generating any power, and the still blades create a sail that puts pressure on the tower, they contend.

The MC Energy three-blade turbines were designed to automatically adjust the pitch of the blades to reduce rpms as the wind-speed climbs, and even to bend away from the wind when the wind speed gets too high, creating less surface for the wind to press against. That allows the turbines to continue to generate power even in higher winds. Both adjustments are accomplished mechanically, without need for electronics, Folsom says.

The turbines also are designed to operate at very low wind speeds, he says. The blades will start spinning in winds of under 4 mph, and will begin to generate power at about 6 mph. The turbines can produce their rated kilowatt production capacity at winds of 24 mph.

In another design feature, the wind turbine's steel tower is hinged at its base, allowing for the tower to be tilted down to the ground for maintenance. To give them stability, the 10,000 pound steel towers are mounted to a concrete slab measuring 13 feet square and 4 feet thick, Folsom says.

Folsom says he and Higgins, who both have had a long interest in wind power, began designing a wind turbine about two years ago, after seeing the much larger versions along the roadsides on travels throughout the Northwest. The two men tested their designs by mounting one of their wind turbines on a trailer that they pulled at high speeds down the Felts Field runway when it was closed, and the Mead Airport runway while it was not in use.

Later, they built a makeshift wind tunnel inside one of the cavernous buildings at The Factory Co.'s campus at 2425 E. Magnesium. They mounted some free, surplus helicopter blades to a fan mechanism they engineered and built there and powered it with a large, hydraulically driven electric motor, to create winds exceeding 50 mph in the building.

MC Energy erected its first wind turbine on property Folsom owns along state Route 27 at Mica about six months ago, where it has been testing its performance, Folsom says. There, he says, the turbine performed well during two high-wind storms this spring.

Currently, MC Energy is selling the wind turbines directly to customers, using its own salespeople, but also is working on developing a distribution network that would include trained agents who would sell the devices on MC Energy's behalf. Folsom says he suspects the market, at least for now, generally will be in the Pacific Northwest.

Currently, the new venture is using some donated office and assembly space at The Factory Co.'s campus, and its salespeople are working out of their cars and from their homes, Folsom says. He says, though, that he has purchased land in Spokane County for an MC Energy headquarters building and manufacturing plant, the location of which he declines to disclose until building plans are firmed up. He hopes to build such a facility there next year.

MC Energy is contracting with The Factory Co. to do its fabrication work, and some production workers from that company provide assembly work for MC Energy on a freelance basis, Folsom says. For now, the new venture buys the blades, inverters, and generators needed for the turbines, but makes the towers and all the other components from scratch. Folsom says the company hopes to be able to build its own generators in the future, something The Factory Co.'s predecessor, RAHCO International, had some experience with.

Currently, the company is able to produce about one turbine per week, but Folsom says he hopes to be building one a day by the end of this year, and to have about 50 units in service by then.

"From what we're hearing, sales won't be a problem," he says.

Folsom says that although the cost of buying a wind turbine might, at first blush, seem high to a homeowner, farmer, or small business, there are significant tax benefits and other rebates available. Currently, he says, the U.S. government is offering a rebate totaling 30 percent of the project cost. Meanwhile, Washington state will waive sales tax on the purchase and also will give the buyer a grant amounting to 12 cents per kilowatt hour of electricity it produces, up to $5,000 a year, Folsom says.

Also, the electric utility that serves the buyer's property will credit the owner for any surplus energy it generates that can go back on the grid. All of that money is in addition to whatever savings a property owner realizes by using the wind turbine's power rather than buying it from a utility, a value Folsom estimates at between $150 and $200 a month for most homeowners.

"It really does pay for itself," Folsom says, adding that the average payback, not including power savings, would be seven to nine years.

Folsom says that like most companies, The Factory Co. has suffered during the recession, but is starting to see improvement in its orders. "The shop is pretty busy right now, but not like it was two years ago," he says.

The company currently employs about 45 people, well down from the 75 it employed not long after he bought the contract-manufacturing and other assets of the former RAHCO International from Richard Hanson in 2008. A year earlier, Hanson had sold off that company's materials-handling business, as well as rights to the RAHCO name, to a Danish conglomerate, which launched a company here called FLSmidth RAHCO Inc., which now is a customer of The Factory Co.

RAHCO International, which once was known as R.A. Hanson Co., had become a well-known designer and manufacturer of industrial equipment ranging from canal-digging machines and potash harvesters, to giant conveyors for mining operations. It was founded by the late Raymond Hanson, who invented a device to allow agricultural combines to operate on steep hillsides.