Women caring for women: A new model for Rockwood 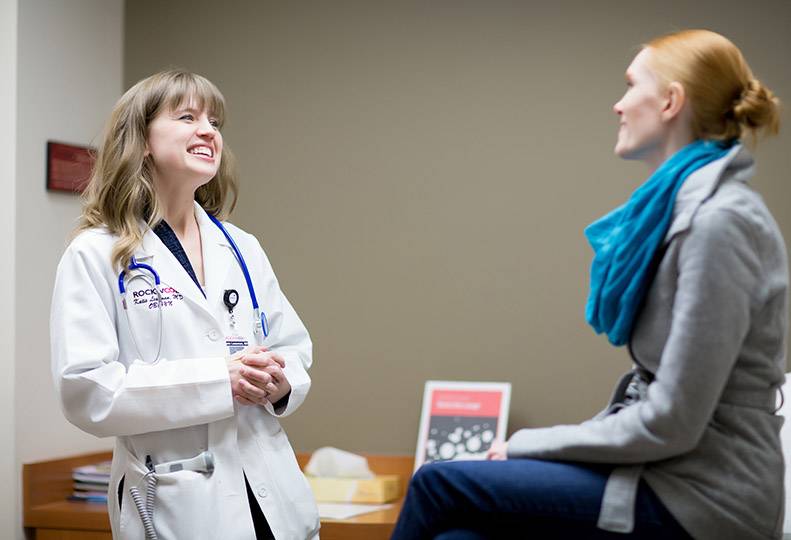 -—Nikki Belyea
Dr. Katie Lessman talks with Jennah Flinders, one of her patients at the OB/GYN & Midwifery Center at Deaconess’ Rockwood offices. Lessman is the department group leader.

Obstetricians and midwives both provide care to women during childbirth, and both work together at Rockwood OB/GYN & Midwifery Center, in a department that, by design, offers health care by women for women.

An advertisement running in area magazines this month, sponsored by the center, shows a photo of 12 women with a caption that reads “Care for women, by women.” The women in the photo, five medical doctors and seven certified nurse midwives, are all proud of the fact that the department is an all-women crew and in fact, some of the women in the group were planning its structure for many years before the all-women department became official.

Dr. Katie Lessman, department group leader, was instrumental in the formation of the department two years ago. Lessman says everything has changed since then, with the entire department being regrouped. The women in the group have essentially been handpicked to provide health care for women in a specialty where women caring for women makes a difference, says Lessman.

“There have been changes on the obstetrics side in the last couple of years,” says Lessman, who worked with other department heads to make the changes. “We completely rebuilt it,” she adds.

The Rockwood OB/GYN & Midwifery Center, which is located at 910 W. Fifth, next to Deaconess Hospital, employs about 18 nurses and support staff in addition to the physicians and midwives who work there.

A big part of the change, besides a focus on women caregivers, is that patients are no longer assigned strictly to one physician. All midwives and physicians have access to patient charts and the group shares information and gives advice about patient care freely.

As a rule, the five physicians tend to treat higher-risk patients at the center. Midwives help birth about 25 babies there every month, about the same number as the physicians.

Renata Gruber, a certified nurse midwife (CNM) and advanced certified nurse practitioner (ARNP), says the center has been a dream of the seven midwives who came from three different health care providers to practice at Rockwood’s center. Both she and Lessman say the more people in sync with a woman giving birth … “the better her labor will be.”

When potential patients call the center, they are asked whether they want to see a nurse or a midwife.

The women all knew one another so when the opportunity to work together arose, all seven jumped at the chance, says Gruber.

All seven of the midwives in the group are licensed with CNM and ARNP designations. Certified nurse-midwives (CNMs) are registered nurses who have graduated from a nurse-midwifery education program accredited by the Accreditation Commission for Midwifery Education (ACME) and have passed a national certification examination to receive the professional designation. An advanced registered nurse practitioner is a nurse practitioner who has taken training and passed a national examination in one of four areas, in this case midwifery.

Nationally, in 2007, certified midwives and nurse-midwives attended 318,00 births, or 7.3 percent of all births, according to the National Institute for Health Statistics, a 240 percent increase over the number in 1989.

Gruber says a significant difference at the center is the feminist model of care—women are making decisions about their own care.

“We feel that we can give women more choices,” she says. “It’s not the patriarchal model that prevails-women come in and the doctor tells them what’s wrong and then treats them. Women should be given choices. Women should be in charge of themselves. We offer options and they choose.”

Gruber says the women dreamed of creating an all-women practice for many years.

“It’s a delicious, perfect model,” she says, adding that the combination of open communication and collaboration of patient care is optimal. Women who have been to the center have probably been seen by one or more of the other midwives and doctors, which means they probably are acquainted with whomever is on call for the birth.

“I can consult with them when needed, and the two groups are very collaborative but separate,” she adds. “Our patients get a team experience.”

Gruber says midwives, more than obstetricians, have to deal with public perceptions that aren’t necessarily true.

“People think that midwives deliver babies out in tents, squatting down over a brick,” she says with a laugh. “Certified nurse midwives deliver in hospitals or birthing centers. Not that we look down on other types of providers. They all fit in a different niche of the same system. Different women have lots of different needs and desires.”

While midwives can order and interpret diagnostic tests, diagnose and treat common illnesses and injuries, as well as prescribe and manage medications, only doctors can surgically intervene if a cesarean section is indicated.

A cesarean section, or C-section, is the delivery of a baby through a surgical incision in the mother’s abdomen and uterus. In certain circumstances, a C-section is scheduled in advance, and in other cases, it’s done in response to an unforeseen complication.

The group of midwives at Rockwood, all talking at once during an interview with a Journal reporter, offer up all the alternatives they use for women who want to go through childbirth naturally including hydrotherapy, the use of bean bags chairs, birthing stools and more.

“We can help deliver babies with the woman standing up holding onto a bar, squatting, sitting and any other position she wants,” Gruber says.

“And most women want to sit or stand up to deliver,” she adds.

Lessman says that while she would love to help women birth every baby vaginally rather than by C-section, there are many reasons women might need to have the surgery. “We deal with diabetes, hypertension, advanced maternal age … and as physicians, we have (different) tools in our arsenal,” she says.

She says that while the rate of C-sections might look higher for physicians than the rate for midwives, the reason is that 75 percent of the patients physicians at the Rockwood center see are women with high-risk pregnancies.

As long as mom and baby are doing well, typically midwives are more patient in waiting for labor to move forward, Gruber says.

They also can offer a woman the same pain medications a physician can provide.

“Women instinctively know what they need to do. But they want to be listened to,” she adds.

Gruber says another misperception about midwives and OB/GYNs is that they only see women during pregnancy and childbirth. Recent studies show that a significant number of women in the U.S. see a midwife or OB/GYN physician through their whole lives for health care, she says.

She says her patients range in age from about 10 years old to 92.

“I see women throughout their life span,” she adds.