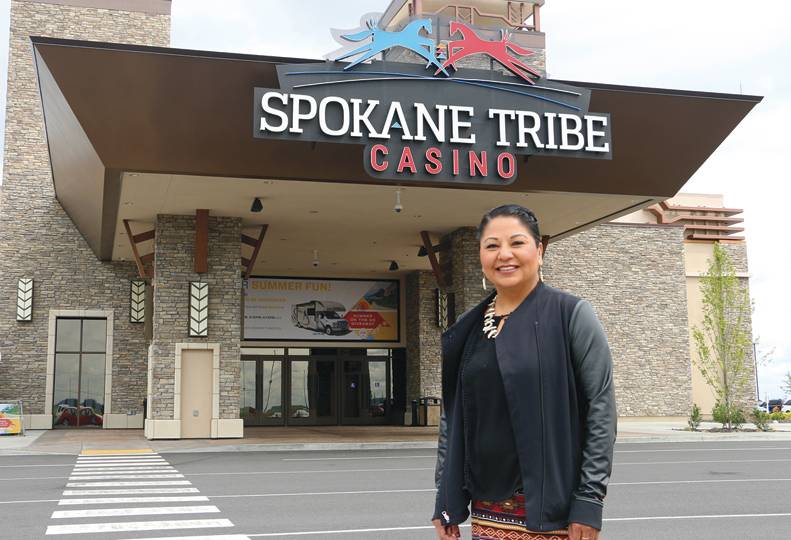 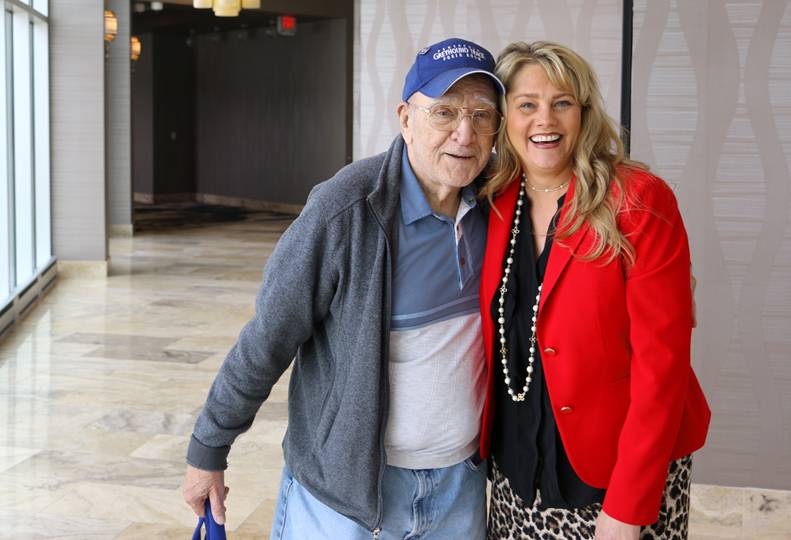 Women in leadership roles in two Spokane-area Native American economic development organizations say their tribes are recognizing the benefit of diverse voices, and they anticipate more women will be filling executive positions soon.

Meg Miller, the executive director of resort operations at Northern Quest Resort & Casino, is one of the Kalispel Tribe of Indians’ female executives. Miller says she’s noticed that Spokane’s business climate is moving to embrace more female leaders, with many being selected as the head of their organizations.

“I think businesses are starting to see the value in having diverse voices at the table,” she says.

Maria Cullooyah, assistant planning director for the Spokane Tribe of Indians’ economic development department and real estate development director, says she believes today’s women are strong minded, independent, and willing to step up and seize leadership opportunities at all levels of business.

“More women are going to college, getting an education and experience than ever before,” she says. “I believe that women who want to succeed will find a way.”

Jennifer Mitchell is the chief marketing officer for the Kalispel Tribal Economic Development Authority. She says it’s become more important for businesses to recognize that female leaders have additional life challenges and support them in their need for work-life balance.

“All employees need to feel they’re valued and supported,” she says. “If you can create a healthy environment, your employees will be happier, and it’s been proven that happy employees are more productive.”

Mitchell describes her role as ensuring the growth and continued success of all of the Kalispel Tribe’s businesses.

“The tribe has been diversifying its business line for about 10 years now, and our master plan includes further development,” says Mitchell. “We’ll keep developing as long as we have the continued growth and momentum to do so.”

In April, the tribe opened a new casino called Kalispel Park & Casino, in Cusick, Washington, about 50 miles north of Spokane. The tribe also owns what was formerly the Spokane Country Club and is now the Kalispel Golf & Country Club.

Mitchell says she’s worked most of her career for businesses that are family owned and operated, and she considers the Kalispel Tribe to be in that category.

“The tribal members are the owners,” she says. “I consider myself a steward of the business. It’s my responsibility to grow it, care for it, and hopefully leave it more successful for the next generation of Kalispels.”

Mitchell holds a bachelor’s degree in journalism and political science from Eastern Washington University and has studied toward obtaining a master of business administration degree through Gonzaga University.

While she has yet to complete her master’s degree, she says it was important to her to pursue a greater understanding of business operations and use that knowledge in her career.

“I felt it was important to have that perspective, because of how things like analytics impact marketing today,” she says. “It’s become more challenging than ever to track what’s being spent where and keep things efficient but still creative.”

Mitchell started at Northern Quest in 2009 as executive director of marketing and communications. She helped build the property’s marketing department before stepping back in 2011 to focus on her family, a choice that she says is difficult for many working women.

“I had to have faith that I’d built a good enough reputation that those opportunities would still be there when I returned,” she says. “I was lucky to have the support from my employer to be able to come back as CMO in 2016, after a significant time away.”

Mitchell, who was recognized in March with a Women in Business Leadership Award from Bozzi Media, says the skills she needed to become a leader included a strong work ethic, maintaining integrity, and learning from mentors whose abilities she respected.

“It’s never lost on me that I was once a young woman who looked to others for mentorship and support,” she says. “So, I always strive to be the best mentor I can be.”

She says one of the key focuses of the Kalispel Tribe is investing in future generations and providing them with opportunities for advancement.

“What’s unique about the tribe is that our work supports an entire government, and programs within it that benefit all tribal members,” she says. “That gives us an additional responsibility to create an environment and opportunities that will support future generations for years to come.”

Cullooyah says the Spokane Tribe just recently has begun its own new era of economic development, and she’s excited to be a part of it.

“We’re focused on providing job opportunities and training for our people and moving forward in creating a stronger community,” she says.

Cullooyah says the tribe received a grant from the federal Department of Housing and Urban Development in 2011 to create a Sustainable Community Master Plan, which outlines its goals for improving infrastructure, housing, transportation, and the environment, as well as economic development.

Part of that plan is a redesign and revitalization of Wellpinit, Washington, a town about 40 miles northwest of Spokane on the Spokane Tribe’s 160,000-acre reservation. The redesign envisions adding new buildings and transforming the town into a more livable community.

“We have some big plans, including a remodel of the trading post and creating more parks and other spaces for people to gather as a community,” Cullooyah says.

In 2016, the tribe was designated as a Promise Zone, part of a federal program that provides funding and resources toward projects that are designed to improve high-poverty communities.

Last year, the tribe also transformed its Two Rivers Casino in the Lake Roosevelt area into a resort and RV park, and Cullooyah says it’s working on plans to add a hotel development at its Chewelah casino soon.

One of the Tribe’s largest projects was the creation of the Spokane Tribe Casino, which opened early last year at 13918 U.S. 2, just west of Airway Heights. Cullooyah says the tribe intends to develop a retail establishment at the site, as well as a green industrial park.

“It’s the dream of many to have our own energy department and be able to offer that to our community,” she says.

She adds that the tribe started work last month on a $2 million Children of the Sun Solar Initiative, which will bring solar power to some buildings on the reservation, as part of a larger renewable energy plan.

Cullooyah has an MBA from the University of Phoenix online. She is a 2018 Business Alliance for Local Living Economies fellow and also serves on the board for the Spokane Independent Metro Business Alliance.

“I wear a lot of hats,” she says of her role. “I’d always had the mindset that I wanted to work in business and entrepreneurship, because I learned growing up that understanding those were key to achieving success in life.”

Cullooyah says her biggest role models were her mother and grandmother, who encouraged her to get an education and return to the tribe to share her expertise.

“I wanted to learn and bring that knowledge back to our community, so we could move forward and be successful,” she says.  “I really feel the peak of my career is now, at this time when we have the tools and resources to help the tribe move forward.”

Cullooyah says she also continues to be inspired by current Spokane Tribal Chairwoman Carol Evans, who is the first female ever to have served in the role.

“I had a lot of role models growing up, and the biggest thing they taught me was that you can’t sit and wait for things to happen,” she says. “You have to go for what you want and make things happen. I hope I can help other women break pathways and lead us into the future, because there’s still so much to do.”

Miller, like Mitchell and Cullooyah, says her role as a leader is fueled by the tribe’s core mission of creating a strong, supportive community.

“Most businesses report to shareholders or ownership groups, but our mission is focused on improving the larger community,” she says. “The tribe welcomes exploration and education, investing in its employees and its community whenever possible.”

She says leadership is a quality that should be present on every level of employment, not just the executive level.

“Being a leader is about how you present yourself at work, the attitude you show up with, and the level of accountability you hold yourself to,” she says. “I expect everyone I work with to lead by example and work together toward a healthy and happy environment.”

Miller says one project her team accomplished this year was starting a recycling program at Northern Quest that’s already reduced waste by about 40 tons.

“It’s amazing to be able to take huge initiatives like that across the finish line,” she says. “Knowing that what we’re doing isn’t just good for our businesses but also contributes to the tribe’s goal of creating a healthy community is also so rewarding.”

In 2017, Miller was named one of the Journal’s Rising Stars. In addition to her career at Northern Quest, she serves on several industry, nonprofit, and civic boards, including the executive boards of Visit Spokane and Innovia Foundation, formerly Inland Northwest Community Foundation.

“Women tend to be more communal, comfortable working as a team and receiving feedback,” she says. “I think women will continue to play a vital role in moving forward with the tribe’s mission.”