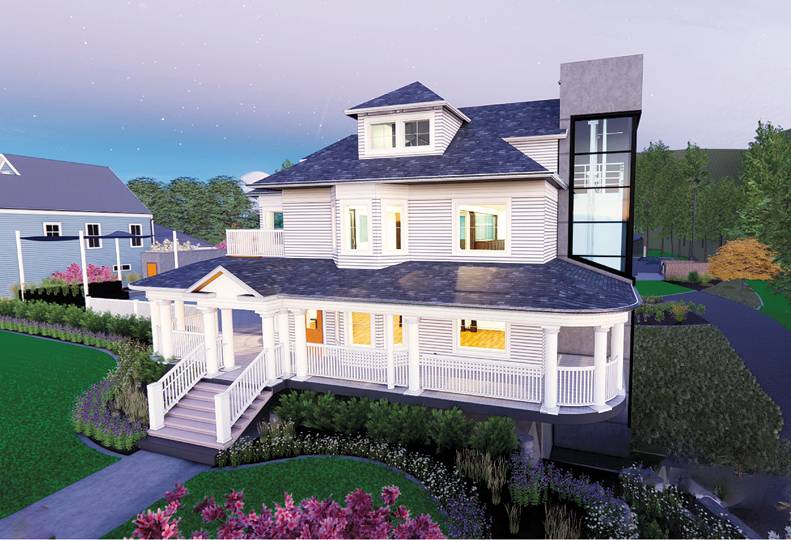 -—Architects West Inc.
The historic J.C. White House has been moved to the base of Tubbs Hill and will be refurbished to house the Museum of North Idaho.

The Museum of North Idaho expects to begin work soon on its new home at the historic J.C. White House.

Britt Thurman, executive director of the Coeur d’Alene-based museum, says the house, was saved in 2019 from demolition and moved from North Eighth Street to 720 E. Young, at the base of Tubbs Hill. The house was built in 1904 by J.C. White, engineer and co-founder of the Coeur d’Alene & St. Joe Transportation Co. steamboat business.

“In addition to renovations to the interior and exterior of the White House, we are building a large underground wing that will house our archives and brand-new exhibits,” Thurman says.

The current phase of renovations is valued at $2.6 million. The project is being funded through grants, foundations, and private donations.

“Since early 2021, our project costs have doubled due to inflation, the supply-chain issues, and worker shortages, so we are back to fundraising,” Thurman says.

The full project initially was valued at $5 million. The museum is hoping to raise an additional $5 million to fund the increased costs, Thurman says.

Johnson Construction, of Coeur d’Alene, the contractor on the project, is expected to start work on it within the next couple of weeks, Thurman says. Coeur d’Alene-based Architects West Inc. designed the project. BC Engineering Inc., of Hayden, is providing engineering services.

The new Museum of North Idaho will use interactive technology in exhibits, such as an augmented reality-enhanced topographic map of the region and touchless video screens. The exhibits will feature displays of the geology and geography of the waterways of North Idaho, a vignette on the Coeur d’Alene Tribe’s origin stories, and mining and other economic activities established by American and European settlers. A gallery area will host internally produced temporary exhibits and externally produced traveling exhibits.

Founded in 1973 and originally located on the North Idaho College campus, Museum of North Idaho has occupied a 4,400-square-foot building at 115 Northwest Boulevard since 1979, Thurman says. That building doesn’t have heating, so the museum has been closed each year between November and March; the building is scheduled for demolition.

In 2019, Coeur d’Alene’s urban renewal agency, ignite cda, transferred ownership of the 1-acre Young Avenue site, valued at more than $900,000, to the city of Coeur d’Alene for the purpose of a museum. The Museum of North Idaho has a long-term lease with the city.