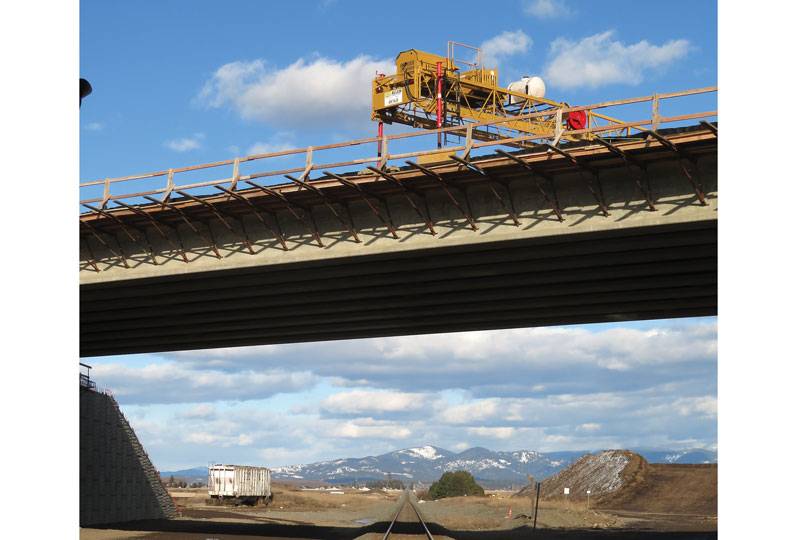 -Mike McLean
A railroad overpass for northbound traffic is one of the early projects in the $131 million state Route 41 expansion between Post Falls and Rathdrum.

The Idaho Transportation Department has begun a multiyear, $131 million effort to expand and improve a 6.5-mile section of state Route 41 from Post Falls to Rathdrum.

The work includes widening the highway by adding new lanes to the east of the existing lanes, constructing bridges over railroad tracks north of Hayden Avenue, removing a separate railroad crossing south of Hayden Avenue, adding a path for bicyclists and pedestrians, and improving the interchange at Interstate 90, according to ITD plans.

North of the Post Falls city limits, the northbound and southbound lanes will be divided by a 50-foot grassy median where possible, ITD plans show.

The existing highway will be improved and converted to southbound lanes. The future northbound lanes will be constructed first, allowing much of the work to be performed with minimal traffic impact, ITD plans say. Once new lanes are completed, traffic will be moved onto that section while the old lanes are being reconstructed.

ITD has awarded Kent, Washington-based Scarsella Brothers Inc. two contracts totaling $52.9 million for the work underway and planned through 2023. The freeway interchange improvements, currently estimated at $78 million, will be constructed within the next six years, according to the department’s plans.

One of the first components of the project, construction of the railroad overpass for the future northbound lanes is expected to be completed in the spring, says Bob Seale, community development director for Post Falls.

The cities of Post Falls and Rathdrum participated in project design and have committed some funding.

Work scheduled for this year also involves constructing the new lanes from the Highway 41 intersection at 12th Avenue and the intersection at Boekel Road and construction of a railroad overpass for southbound traffic, Seale says.

Work scheduled for 2022 includes improving the southbound lanes between Boekel Road and Prairie Avenue. The work on the half-mile portion of Highway 41 between Prairie Avenue and the I-90 interchange will be conducted in 2023, Seale says.