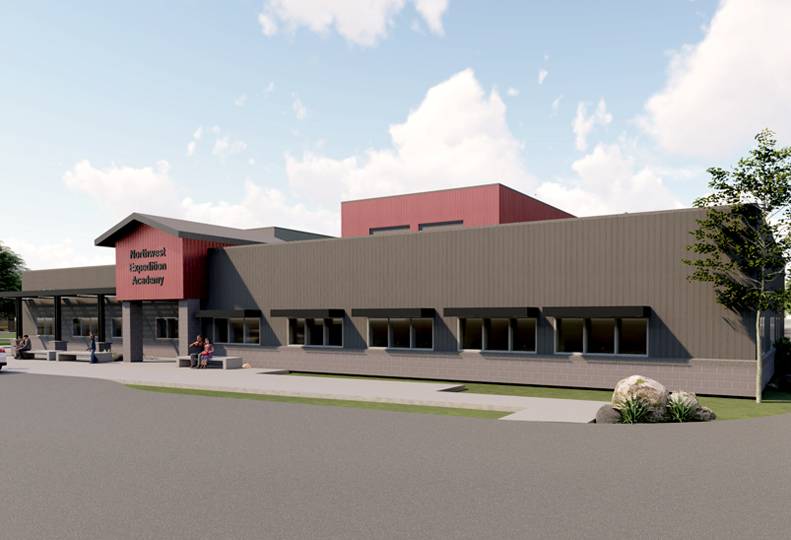 -Architects West
The new Northwest Expedition Academy building is being built at 2008 W. Prairie. The school will move there from its current quarters in Hayden.

The new Northwest Expedition Academy building, which will have more than 53,000 square feet of space, is being built at 2008 W. Prairie, on the south side of Prairie Avenue and a quarter-mile west of Ramsey Road. Coeur d’Alene-based Ginno Construction Co. is the general contractor. Architects West, based in Coeur d’Alene, designed the building.

The Coeur d’Alene School District purchased the 7-acre site on which the school will be constructed for $1.1 million in May 2018.

Students at NExA, a 2-year-old K-5 program that uses expeditionary learning models, have been using the former Hayden Lake Elementary School site, which was built in 1936.

Scott Maben, the district’s director of communications, says it eventually plans to sell the 28,000-square-foot Hayden school building, at 9650 N. Government. The two locations are a little more than two miles from each other.

“The district doesn’t have any interest in retaining that building,” Maben says of the former Hayden school site. “It would take millions more to modernize it than to build a new school; make it (Americans with Disabilities Act) compliant and all.”

Since the new building will be nearly double the size of the current location, school district officials expect NExA’s enrollment population to increase from 282 students now to 600 when it debuts September of 2020.

The school district’s most recent new school was the rebuild of Winton Elementary School, which opened four years ago. Construction of NExA is  part of the $33.5 million bond measure approved by voters in March 2017.

Kate Orozco, the district’s assistant superintendent of elementary education and instruction, says, “This new school will be equally impressive and serve families in one of the fastest-growing areas of our community.”

Hayden Lake School was built in 1936 and operated until 2005, when the district closed it after building another elementary school nearby. In 2009, the district renovated Hayden school and reopened it as a kindercenter program, Maben says.

The kindercenter program was suspended, and the school district placed Winton students at the Hayden site while Winton was demolished and rebuilt, he says.