WSU medical school finds itself in the midst of change

As dean leaves, remodel starts at Phase One facility 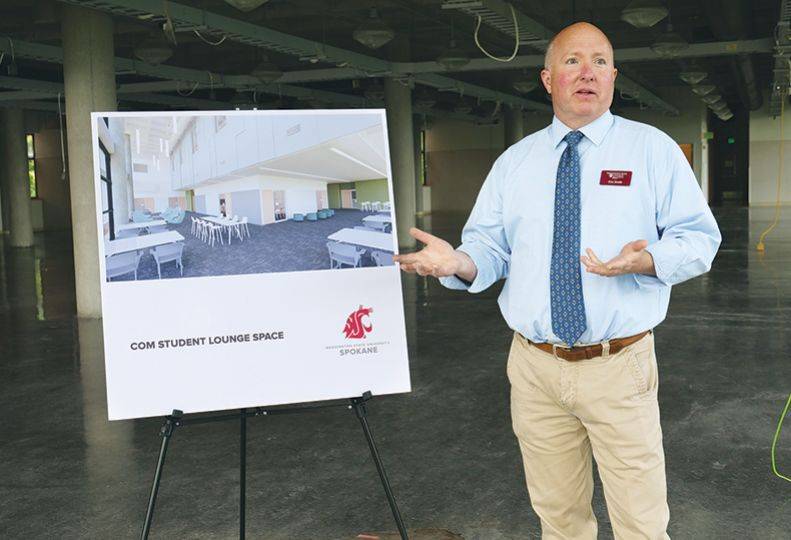 Washington State University’s Elson S. Floyd College of Medicine, located in Spokane, is in the midst of change to its physical location and to its leadership.

On June 15, the medical school announced that founding dean Dr. John Tomkowiak had stepped down from his role, as of June 2. His interim replacement, Dr. James Record, was announced the next day.

The same day Record’s hiring was announced, June 16, the medical school held an event to celebrate its expansion into the Phase One building on the Spokane campus.

Dr. Daryll DeWald, vice president of health sciences and chancellor of WSU Spokane, says he feels the college is in a good place.

“I see this as a time of growth,” DeWald says. “Dr. Record’s leadership, our partnerships, and the continued confidence expressed by Washingtonians, position us to continue to grow our community-based medical programs here in Spokane and beyond to meet the needs of underserved communities.”

DeWald says Tomkowiak resigned from WSU after more than six years as dean. Tomkowiak came to Spokane from Chicago, where he served as dean and acting chair of the Department of Psychiatry and Behavioral Health at the Chicago Medical School.

In February, Tomkowiak was one of four finalists for the position of president at Eastern Washington University. The role has since been filled by Shari McMahan.

DeWald declines to discuss details of Tomkowiak’s departure, but he spoke positively of his tenure.

“He’s really built a strong team, and we’ve got great inertia with our degree programs and with our research,” DeWald says.

There were 338 students enrolled  at the medical for spring 2022, says Chantell Cosner, director of marketing and strategic communications for WSU Spokane. That number doesn’t include resident physicians.

WSU announced on June 16 that Dr. James Record had been selected for a two-year appointment as interim dean of the College of Medicine. Record is vice dean and clinical professor in the department of medical education and clinical services. Record took the reins as of June 24.

DeWald says Record’s two-year appointment is intended to demonstrate that the medical school will remain stable through the search for a new leader.

“We want to give confidence to the College of Medicine community that we’re not going to rush this process, that we’re going to be deliberate and careful about it,” DeWald says.

DeWald says the medical school has begun speaking with vice deans and associate deans to determine what it needs from its next dean and is working with the provost and president’s office to launch a national search.

“We want an individual who has strong academic experience, strong clinical knowledge, and a commitment to developing internal and external partnerships,” DeWald says.

It’s important for the next dean to understand the vision for the medical school’s growth, DeWald says, and how that growth is tied to work within the community.

“The challenge will be how to build out a community-based medical program across the state,” DeWald says. “Included in that are not just the educational programs, but the research programs.”

“Currently, we’re working with Pullman Regional Hospital, we’re pleased to be working with Providence Everett, and we’re planning more residency program expansion both here in Spokane and at other sites in Eastern Washington,” DeWald says. “The dean will need to be able to shepherd and steward some of that.”

The medical school will have a new home before the new dean is named.

On June 16, the medical school held a construction kick-off event at the Phase One classroom building, at 205 E. Spokane Falls Blvd., on the WSU Spokane campus, in the University District to demonstrate plans for the building’s renovation.

Rather than building a new facility to expand the College of Medicine, WSU chose to use about $15.5 million to renovate the 29-year-old flagship structure on its Spokane campus, called the Phase One classroom building, says Eric Smith, director of facilities and capital projects at WSU Spokane.

“We’re trying to let the building drive how we approach this,” Smith says.

A major focus of renovations will be managing noise in the building, Smith says. Sound in the 113,000-square-foot building tends to echo, and Smith says an acoustic engineer recommends laying carpet in many areas of the building as well as installing acoustic panels in common areas.

Smith says changes on the ground floor will include creating a testing center and replacing a 100-seat, barrel-shaped auditorium with a glass wall. On the second floor, the former Eastern Washington University creative writing graduate degree program space will be converted to a student lounge that will include a kitchen and a technology bar with 3D printers. The third floor will have workstations and seating with views of the Spokane River.

Smith says that some aspects of the building, such as a computer lab on the second floor and faculty offices on the third floor, will remain as-is because the university doesn’t currently have the funds to change them.

Since 2011, the Phase One building had held several EWU programs. Those were relocated in 2021, either to the university’s main campus in Cheney or to the Catalyst Building, located to the southeast of the WSU Spokane campus.

Programs at the Elson S. Floyd College of Medicine have been spread out throughout six of the seven the WSU Spokane campus buildings since the medical school’s founding in 2015.

“They’ve been positioned wherever we’ve had space,” Smith says.

Many of the college’s programs will find a new home in the Phase One building, Smith says.

“They’re still trying to figure out who’s moving where,” Smith says. “We don’t have enough room to pull everybody out of all their existing spaces and consolidate them.”

The WSU Center for Clinical Research and Simulation, for example, will remain in a leased space near the WSU Spokane campus, at the southeast corner of Front Avenue and Sherman Street.

Phase One will be renamed at some point during the renovation process, Smith says.

“We haven’t gotten to that phase yet,” he says.

Work on the building is expected to be completed by mid-2023, Smith says. The design-build team of Spokane-based Bouten Construction Co. and Portland-based Hennebery Eddy Architects Inc. is handling renovations.