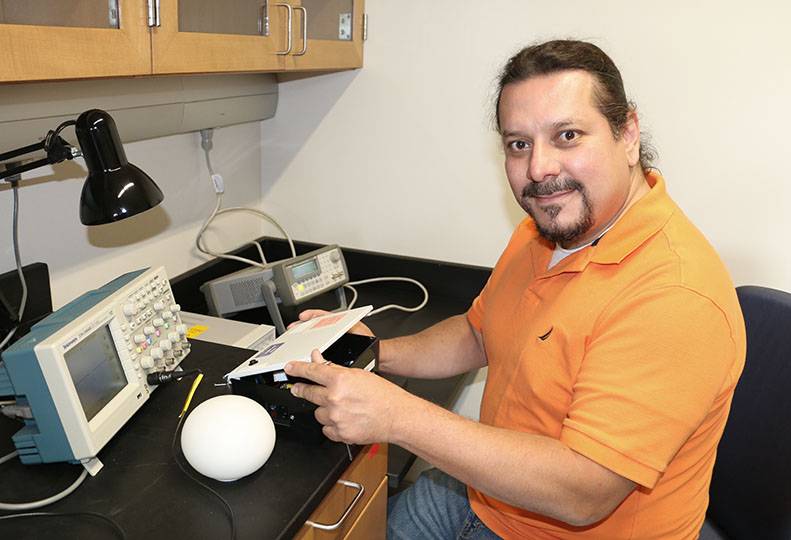 -—Samantha Howard
Martin Schiavenato, assistant professor at Washington State University’s College of Nursing here, says the research effort, called The Orb Project, has led to the development of a prototype. 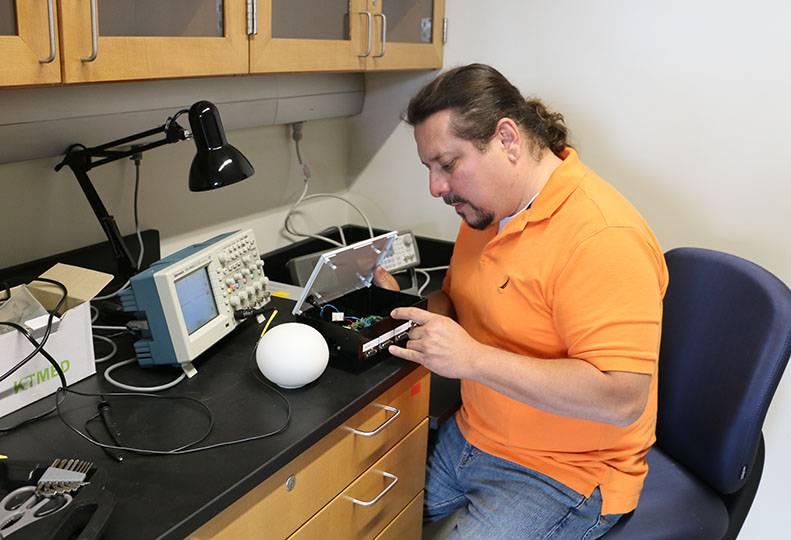 Washington State University researchers are developing a device that can detect pain in premature infants and might be used in the future to help prevent disabilities, says associate professor Martin Schiavenato, WSU College of Nursing.

“An infant’s central nervous system is not fully developed yet, and there’s mounting evidence that pain contributes to structural brain abnormalities that may lead or contribute to many cognitive and behavioral conditions,” Schiavenato says.

He formerly was a nurse in a neonatal intensive care unit and says premature infants undergo an average of 12 painful procedures per day during their first weeks.

The research effort to measure that pain, called The Orb Project, has resulted in the development of a prototype that consists of a smooth black box housing data-gathering electronics and a separate, but connected LED light about the size of a pear that sits upon the box. Both will be revamped before the final product is revealed.

The light, say Schiavenato, will change colors based on the amount of pain felt by the premature infant, or preemie, being monitored, though the exact color scheme has yet to be decided. Called “ambiance display,” the changing of colors will provide a way to alert neonatal intensive care unit staff members to infant pain without generating any sound, says Schiavenato.

The current device is designed to connect to a NICU monitor, which the infant should also be connected to, and also includes sensors that attach to the child’s cheek and hands. The intent is to collect distress signals in the infant; the information is sent to the black back to calculate a pain score, thereby affecting the LED lamp’s color, says Schiavenato.

Fresh funding will begin officially in August, but Schiavenato says the project has been in the works for years. Original funding came from the Robert Wood Johnson Foundation in the form of a $350,000 grant in 2008 and ran through 2011. The current grant has been awarded to finalize the best approach to measure facial grimacing in infants, which wasn’t successful in the previous approach taken.

The project recently received a $235,000 grant from the Life Sciences Discovery Fund, which was established in 2005 by Washington’s governor and the state Legislature and is funded partially with money from a national tobacco civil litigation settlement. The discovery fund was created to foster growth of the state’s life sciences sector and improve the health and economic wellbeing of its residents, its website says.

The Orb Project seeks not only to help premature infants, but also to attract venture capitalists and create jobs, Schiavenato says.

Most early research is taking place in the Pullman lab of research team member Subhashu Gupta, an assistant professor at the WSU College of Electrical Engineering and Computer Science. Gupta calls that the “systems-on-chip” lab. A respective Spokane facility has been dubbed the Schiavenato pain lab. Although the current device isn’t ready for clinical trials, Schiavenato hopes they will be conducted in the Sacred Heart level-four NICU, where the most endangered infants stay.

He says the pain that preemies experience in the NICU is linked with several lifelong difficulties.

“Your body secretes a soup of chemicals, neurochemicals, and all sorts of hormones that your body responds as an effect to a painful stimuli,” says Schiavenato. “Now, we’re finding out that this response, this soup of chemicals, is actually poisonous.”

The combination, he says, kills brain cells, harms development, and has been tied to emotional, psychological, and cognitive problems. Schiavenato believes measuring pain is the first step in preventing it.

The device is designed to measure three widely accepted distress signals infants display that Schiavenato believes are good indicators of pain, he says, although there is some debate in the scientific community on that topic.

Hand flexion, the first stress signal, refers in this context to when an infant brings a hand to his or her face. To monitor this, a sensor is attached to the infant’s hands. The behavior doesn’t tell researchers how much pain the infant may be feeling.

However, facial grimacing, the second signal, does give researchers information on that. Schiavenato says infants have a universal pain expression; the intensity of the expression can help determine how much discomfort they feel.

The third distress signal is heart rate variability. When an infant feels pain, says Schiavenato, certain heart rate frequencies will slow down. By hooking up to an NICU monitor, the device can record heart rate activity.

Although funding is slated to last two years, Schiavenato and Gupta want to have an updated prototype within 18 months. That year and a half is set aside for the team to update its software to detect facial grimacing better. Once that’s completed, Schiavenato hopes to attract the attention of commercial partners so the team may begin clinical trials.

As is with all research, limitations apply. A big one Schiavenato addresses is the lack of resources to study all subpopulations that this device may help. Because premature infants naturally are in varying stages of development, he says, they represent a moving target for research purposes. He says in some respects, there is a greater difference between the brain of an infant born after 25 weeks and a full-term baby than that of a full-term baby and an 80-year-old man. That makes it difficult to adjust the device to clearly detect facial grimacing for all premature infants. Clinical trials most likely will determine how precise facial grimacing detection will be for each subpopulation, Schiavenato says.

“Being able to fine tune the device to meet the needs of at least major subpopulations, that’s going to be a challenge,” he says. Schiavenato didn’t express concern about a lack of technology needed to reach all subpopulations but rather a lack of manpower. Businesswise, he says, it’s impractical to pay for the amount of staffing required to collect that much information.

Schiavenato previously worked at the University of Miami as a faculty member before accepting a teaching position at WSU Spokane. “My desire to get into academia was to get into new ways of measuring pain in vulnerable populations, specifically those who can’t tell you how much pain they’re in.” In addition to recording pain, he hopes the device will pave the way for future technology to further prevent disabilities linked to pain experienced as a premature infant.

“That’s the thing I’m really excited about,” he says. “A simple device like that can actually help treat and prevent things that we have no clue about right now.”

Schiavenato says the steps haven’t been connected to go from recording pain to alleviating pain, but he’s confident for the future.

Schiavenato also is looking beyond newborns to help other vulnerable demographic groups. He uses the example of the elderly with dementia, who he says often have difficulty expressing pain.

Realistically, he says, the current black box that houses the prototype’s electronics most likely won’t be what’s marketed to prospective buyers. After the next prototype is revealed, Schiavenato and Gupta would like to merge the device’s software into technology already being used in the NICU.

Schiavenato says infant heart rate and oxygen level are two of many different records kept while a child is hooked up to machines in the NICU. Adding a pain detector to that list, he says, would be the most logical route of implementation.