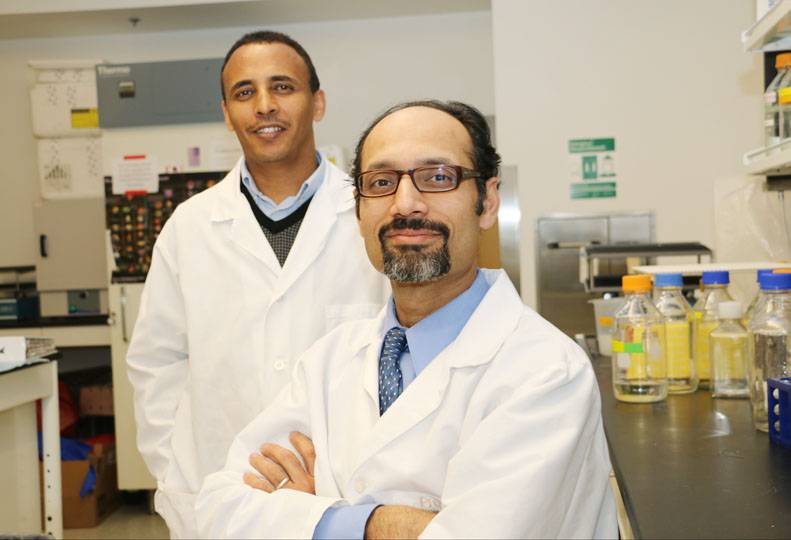 A Washington State University Spokane pharmaceutical sciences student has received a national award from the Rheumatology Research Foundation to fund research into slowing or eradicating osteoarthritis and rheumatoid arthritis.

Solomon Agere, a WSU doctoral candidate under the tutelage of WSU College of Pharmacy researcher Salah-uddin Ahmed, says the award for the eight-week project includes a $3,500 stipend. It also includes $3,000 for lab supplies and travel funds to attend the American College of Rheumatology annual meeting in San Francisco this November, he says.

The research looks at the role of proteins called chemokines that help to pull inflammatory cells from the blood at the site of inflammation, Ahmed says.

“The research aims to discover how the chemokines activate enzymes that contribute to tissue destruction that result in osteoarthritis and rheumatoid arthritis,” he adds.

Eventually, Agere says, he hopes to focus on the relationship between the chemokines and the enzymes to slow or stop the process of bone and cartilage damage.

Osteoarthritis is caused by mechanical wear and tear on joints. Rheumatoid arthritis is an autoimmune disease in which the body’s own immune system attacks the body’s joints.

Rheumatoid arthritis affects about one-tenth as many people as osteoarthritis, says Ahmed.

He claims the research Agere is doing hasn’t been done previously and hopefully will develop into learning how to inhibit the process of deterioration and minimize joint pain. Ahmed says his interest in the disease process is related partly to members of his own family who have arthritis.

“I have several family members who are affected, which may be why I’m so passionate,” he says.

Ahmed says the disease is three times more common in women than men, partly because of women’s fluctuating hormones.

Agere joined the pharmaceutical graduate program in 2014 and has been working with Ahmed since then.

Agere’s parents, both health care professionals, raised him in Ethiopia’s capital, Addis Ababa, and encouraged his studies in medicine, he says.

“My mother is an ophthalmologist, and my father works in a lab there. And my mother suffers from rheumatoid arthritis,” he says. “That’s part of the reason I’m studying autoimmune diseases.”

Agere received his undergraduate and master’s degree from Pune University in India, and then taught for eight years at the University of Gondar, in Ethiopia.

“I was teaching biochemistry, nutrition and immunology at the medical school there,” he says, adding that he also has done clinical research on other diseases that affect sub-Saharan countries, including parasitology, immunology, nutrition and toxicology.

After traveling to the U.S. more than three years ago, Agere interned under Ahmed and then enrolled last fall in the pharmaceutical sciences doctoral program at WSU Spokane.