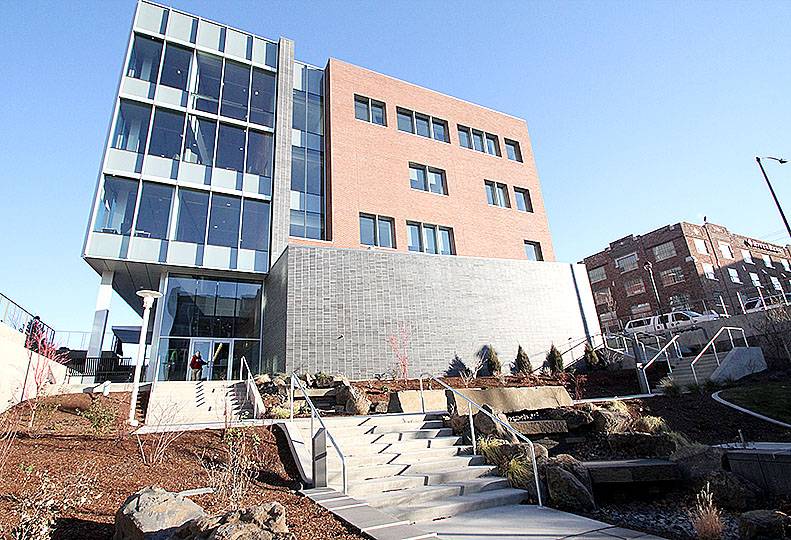 Following the opening of its $79 million Pharmaceutical and Biomedical Sciences Building on the Riverpoint Campus east of downtown late last year, Washington State University Spokane has started its next master-plan update.

The focus of the master plan will be on WSU’s mission in terms of health sciences and academic growth for the next 10 years, says Rusty Prichard, capital planning director at WSU Spokane.

“We’re updating the master plan that was conducted in 2009,” Pritchard says. “We’re not only looking at WSU, but also Eastern Washington University, and other partners in the health-care arena.”

Eastern Washington University has facilities and academic programs in multiple locations on the 55-acre Riverpoint Campus.

Whitworth University and Community Colleges of Spokane also offer programs on the campus, and Gonzaga University, across the Spokane River just north of the Riverpoint Campus, also is within the University District.

“We will collaborate to make efficient use of space and plan for the future,” Pritchard says.

Since the 2009 update, WSU Spokane has constructed the 125,000-square-foot Pharmaceutical and Biomedical Sciences Building, at 205 E. Spokane Falls Blvd., where it has moved its College of Pharmacy.

The pharmacy school, formerly based at the university’s main campus in Pullman, now has 80 faculty members and 500 students here.

WSU also has launched a pilot program in which second-year medical-school students are receiving training here through the University of Washington’s five-state rural-physician training program.

Prior to the pilot, all second-year students in the program named WWAMI for its five participating states—Washington, Wyoming, Alaska, Montana, and Idaho—were trained at the UW School of Medicine, in Seattle.

First-year students have received training here for a number of years, and some Spokane-area physicians provide clinical training for third- and fourth-year medical-school students.

“After that, it’s not entirely clear,” Roberts says, adding that it would require additional funding to ramp first- and second-year class sizes up to 80.

The Pharmaceutical and Biomedical Sciences Building was built with plenty of room for 160 medical students, he says.

“I expect the real need for space will be not so much for teaching, but for laboratories for research for additional faculty that we hire,” Roberts says.

“If we get to our target class size, we will add quite a few more,” Roberts says.

WSU hasn’t compiled its spring enrollment numbers yet, says Terren Roloff, a WSU Spokane spokeswoman, but, in all, the university had 1,225 students enrolled at the Riverpoint Campus in the fall semester, including 493 nursing students.

The undergraduate program at the WSU College of Nursing, which is based in the College of Nursing Building, at 103 E. Spokane Falls Blvd, is operating at capacity, says Alli Benjamin, spokeswoman for the nursing school.


“Our baccalaureate program always is bursting at the seams,” Benjamin says. “Normally, we have 500 applicants for 120 spots.”

She adds, though, that WSU does expect to see growth in student numbers in graduate-level nursing programs that currently include 72 students based at the Riverpoint Campus.

The WSU Spokane master plan will include a vision for future buildings and partnerships that will augment the health sciences mission of the campus, Pritchard says.

It’s too early in the planning process to propose specific construction projects, he says, adding that projected academic growth will drive capital-facilities planning.

“We’re still working through the numbers,” he says.

The master plan update is being led by an eight-member steering committee with contributions from an eight-person working group. The update is scheduled to be completed in May. It then will be forwarded to WSU’s board of regents for approval, Pritchard says.

The plan isn’t far enough along to have spawned any conceptual drawings or illustrations yet, he says.

“In April, we should have a plan based on anticipated growth,” he says. “We’ll probably unveil something then.”
The next capital endeavor that’s already in the works for WSU Spokane will be the Spokane Teaching Health Center, Pritchard says. That center, which will be an on-campus teaching clinic, will occupy space that’s to be renovated in the South Campus Facility, at 412 E. Spokane Falls Blvd., he says.

The Spokane Teaching Health Center will be operated through a consortium of the Empire Health Foundation, Providence Health Care, and WSU, with some funding from the Federal Health Resources and Services Administration. The center will open in 2015 at a cost of $6 million to $7 million, Pritchard says.

The program will train six new residents a year, building up to a total of 18 residents representing three class years, Prichard says.

A resident usually is a medical school graduate receiving advanced training in a clinic or hospital.
The interdisciplinary facility also would provide a clinical setting for nursing, pharmacy, and medical-sciences students, Pritchard says.

The long-vacant Jensen-Byrd building, at 131 E. Main, which WSU acquired in 2001, also will be part of the master-plan discussion, Pritchard says.

“It will come out as a chapter in the master plan. We’re trying to line out what we would like to see that space developed as,” he says.

The 105-year-old building, once slated for demolition by the university, has been the center of at least two failed attempts at private redevelopment.

“We want it focused on meeting the needs of students and supporting their activities—something conducive to academic and student services rather than student housing,” Pritchard says of the six-story structure.

Pritchard adds that WSU would prefer student housing to be part of economic development in the surrounding community rather than on the Riverpoint Campus.

Also as part of the master planning process, the committee will reach out to the economic development community, Pritchard says.

Brandon Betty, project manager for the University District Public Development Authority, says the city of Spokane is in the full-design and property-acquisition stage of the bridge project.

The next phase would be construction, he says, although the city still is seeking funds for the project, which is estimated to cost $11 million to $12 million.

“We just attended a joint-chamber trip to Olympia to advocate a transportation package that includes funding for the bike and pedestrian bridge,” he says.

As envisioned, the nearly 400-foot-long bridge would span the BNSF Railway Co. tracks and Martin Luther King Jr. Way to provide a link for bicycle and pedestrian traffic between the Riverpoint Campus and surrounding neighborhoods to the Sprague Avenue business corridor and Spokane’s medical district on the lower South Hill.

The south end of the bridge would be built at an extension of south Sherman Street, and the north end would be built in the southern end of the Riverpoint Campus at a parking lot directly west of the South Campus Facility.

Jan Quintrall, business and development services director for the City of Spokane, says the Division Street entrance to the University District is a priority for the city.

Initial work would include improvements at the Division Street intersections with Third and Main avenues and Spokane Falls Boulevard.

“We’re really hoping to secure funding and work with the private sector on in a partnership and get it done in the next 12 months,” she says. “I think we can get the bulk of it done for under $1 million.’

Additional work at other intersections and along the corridor between intersections could take another three to five years to complete, she says.

Betty says the economic development partnership between WSU and the business community is gaining strength.
“We want to build off of WSU Spokane’s momentum, and they want to help drive demand for properties surrounding the Riverpoint Campus,” he says.