Mega-retailer discloses plans for massive warehouse on the West Plains 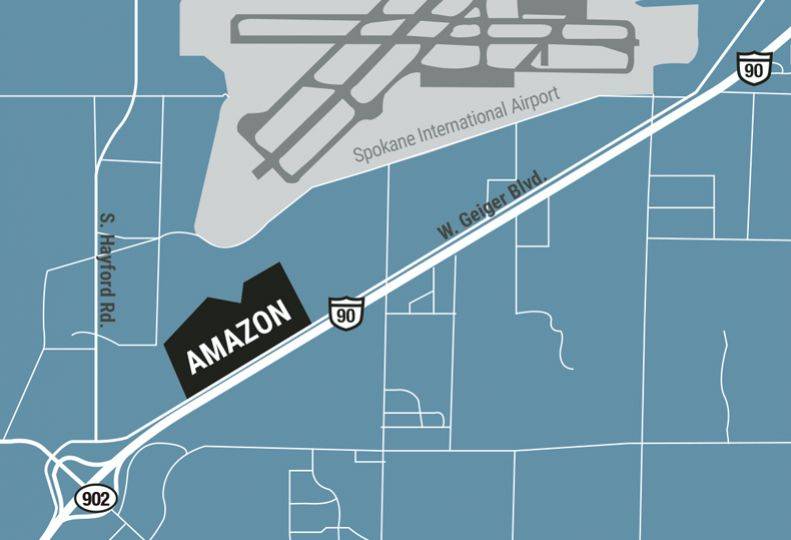 Seattle-based Amazon.com Inc. this morning delivered confirmation of earlier reports first published by the Journal that the online mega-retailer plans to construct a massive distribution facility that will employ more than 1,500 people on the West Plains.

The 2.6 million-square-foot, four-story robotic fulfillment center is being developed at 10010 W. Geiger Blvd., which is northeast of Interstate 90 and the Medical Lake Interchange, just southwest of Spokane International Airport.

Site work for the project is under way, and construction is scheduled to be completed by Aug. 31, 2019, according to planning documents on file with Spokane County.

As of today, a building permit for the $181 million project codenamed Project Rose was described in Spokane County's online files as "technically complete," although it hadn't been approved and issued yet.

The developer has negotiated a $253,100 permit fee with the county, which is a somewhat discounted rate due to the unprecedented scope of the project here.

The company says the center's employees will earn competitive hourly wages and "benefits starting on Day One."

Benefits will include health care coverage, a 401(k) retirement plan, company stock, and maternity and parental leave. The company also offers its Career Choice education program that will prepay up to 95 percent of tuition for courses related to in-demand fields regardless of whether the skills are relevant to a career at Amazon.

While the initial announcement from Amazon says the center will have more 1,500 employees, traffic analysis submitted to Spokane County's planning staff is based on estimates of a typical employee count of nearly 2,200 with a peak-season employment nearly 3,000.

Employees at the fulfillment center will work with Amazon robotics technology to pick, pack, and ship small items to customers, including books, household products, and toys.

"We are excited to have Amazon join our business community with a significant financial investment and new employment opportunities,” says Al French, Spokane County Commissioner. “Amazon is another Fortune 100 company to see Spokane as a critical part of their success and want to be part of Spokane's growth."

French has earlier told the Journal that he had worked with Washington Gov. Jay Inslee to reprioritize and expedite transportation projects planned near the project site to accommodate Amazon's anticipated opening date for the center.

“More than 1,500 jobs are coming to Spokane thanks to this important project,” Inslee says of Amazon's decision to locate the fulfillment center here. “Congratulations to Amazon and all the local partners who have worked so hard to bring these exciting job opportunities to the region.”

“Amazon’s decision to build their new facility format in our community validates the innovative vision of leaders from Spokane County, the City of Spokane and Spokane International Airport to create the first County-City PDA in the state," Krauter says. “The West Plains/Airport Area PDA is committed to Amazon’s long-term success as we view their project as the first in a series of developments that will benefit from the unique combination of air, rail and surface transportation infrastructure with available land in the airport area.”

Todd Mielke, CEO of Greater Spokane Incorporated, the Spokane Region's economic development organization, says it takes a lot of partners to land a project of such magnitude and that kind of cooperation will help with future recruitment.

"Anytime a Fortune 100 company comes into a community, it sends a strong signal for other companies to take a look at the region," Mielke says.

“Washington is known for providing great opportunities for jobs and customer experience, and we are grateful to the dedicated local and state officials and teams who came together to support Amazon in bringing a new fulfillment center to Eastern Washington,” he says.

The Portland office of Trammell Crow Co. is developing the fulfillment center.

Amazon says the company currently employs more than 50,000 people across the state at its headquarters in Seattle and facilities supporting customer fulfillment in DuPont, Kent, and Sumner. The company claims it has invested more than $37 billion in Washington State, including infrastructure and compensation in the last seven years.

The Journal first reported the possibility of an Amazon fulfillment center in April, then followed up with more details. The first permit was issued last month, and the Washington state Department of Transportation and the Spokane Transit Authority disclosed plans to adjust transportation projects to accommodate the big fulfillment center.