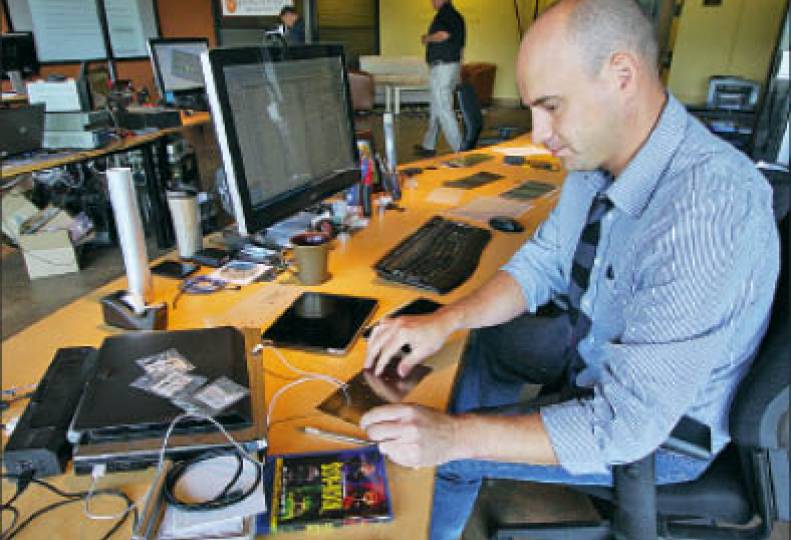 -—Staff photo by Paul Read
Cody Peterson, chief technology officer at Pacinian, conducts research and development in the company's lab in Coeur d'Alene. Its HapticTouch technology could be used in a host of touch screens.

Pacinian Corp., a Spokane concern that develops technology intended to make electronic-device touch screens respond to a user's touch more like the keys on a keyboard do, believes it's on the cusp of seeing its ideas put to use in mass-produced products.

After several years of research and development, the company's technology, which it calls HapticTouch, now is being tested by a number of manufacturers that next will consider whether to adopt the technology in the products they make, says CEO Jim Schlosser. Those devices, he says, could range from hand-held computers to medical and aeronautic instruments to the screens consumers touch at an ATM machine or a check-in computer at an airport.

Adds Pacinian's director of operations, Brad Telin, "Once we get a couple of products in the marketplace, this thing ought to take off."

Pacinian, which was founded in 2007 and now employs seven people, began marketing HapticTouch about six months ago, and the pipeline to full production, if any of its potential customers choose to use the technology, could be another year and a half away, Schlosser says. Meanwhile, though, the company has begun to generate income by doing demo, prototype, and preparatory engineering work under contract with manufacturers that might use the technology, he says.

In the coming year, Pacinian hopes to increase its revenue flow with some early licensing agreements and perhaps with what are called prepaid royalty fees, Schlosser says, adding that the company currently is in negotiation with three companies about possible licensing deals.

He says the company expects to begin breaking even next year.

Pacinian's technology focuses on what's called haptics, which refers to the science of touch and how the brain perceives touch. When a person presses a key on a keyboard, the sensation of that touch, essentially the tactile response when the key moves to indicate it has been pressed successfully, is an example of haptics. Pacinian wants to provide that same sensation when someone presses a virtual key or button on a touch screen, something Schlosser contends hasn't been accomplished well in the industry so far.

To be sure, haptic technologies already are in use with touch-screen devices, including some smart phones.

Among those technologies is one that uses tiny dome-shaped pieces under the screen that react when the screen above them is pressed and an electrical charge to them is triggered, causing the user to feel the sensation of pressing something. Another uses tiny motors with a lopsided mass on their axles (think of a washing machine that's out of balance), which spin momentarily when the screen is pressed, causing a vibration. Motors like these also are used in video-game controllers to create vibrations when a game player is, say, driving a car on rough roads, taking a punch in a boxing match, or striking a baseball with a bat.

Pacinian has developed a completely different technology that it calls surface actuation. With it, two very thin conductive surfaces are held apart from one another with tiny springs placed at their four corners, and when the outer surface is pressed with a finger, an internal sensor triggers a highly-controlled electronic charge between the surfaces that causes them to pull toward each another, against the resistance of the springs. The result is a sensation of a button being pushed, or perhaps some other sensation programmers want to achieve.

The advantage of such technology, Schlosser says, is that there is no motor involved, and the materials used can include the touch screen itself as one of the layers. The only moving part, he says, is the spring.

"Simplicity has been a goal that drives us," he says.

The process of emulating tactile response like that of a keyboard is highly technical, but so was another big challenge for Pacinian—that of developing something that could be replicated in mass-produced devices economically and practically. For instance, the materials "kit" that Pacinian first came up with to solve the challenge would have cost about $150 per device and was about the size of a deck of cards. Something like that, says Telin, would never have made it to market, even though the touch response it created was good. After about six months of further development, Pacinian was able to shrink the kit to about the size of a thumb, and to a per-unit cost of $3.50. By next year, says Schlosser, those guts of the system could end up being the size of a thumb nail, and even less expensive.

Pacinian began marketing its HapticTouch in January, to a targeted group of original equipment manufacturers that already understand the value of haptic technologies. Schlosser says it's hard to educate people about why haptics make products better, but some manufacturers already believe that to be true and now only need to know how well Pacinian's technology will work in their products.

The market, Pacinian says, is huge, with industry expectations that 1 billion touch screens will ship annually by 2013. The haptics industry niche would hope to get royalties of about 75 cents per unit of those, or about $750 million, it says.

Telin says Pacinian's target market for now is for screens that measure at least five inches in diameter, which excludes the smart-phone market, but not the larger readers like iPads and Kindles, and includes larger screens like those on ATMs and in industrial, medical, and other devices and instrumentation.

"Our electronics are currently too big for the handsets, but likely next year or so they won't be," he says.

So far, the response from potential customers has been "intrigue," he says, and some now are testing prototype kits to see how the technology might work in the types of devices those OEMs build, or perhaps how they might be incorporated into devices that haven't even yet developed.

"They say we're trying to find a way to use it," he says.

One such potential customer is doing compliance testing on the use of HapticTouch in a product that has a 10-inch touch screen, says Schlosser. "We're halfway through that testing, and we're very confident it will be successful," he says.

The company received a shot in the arm this past spring when Frost & Sullivan, a global industry research company, awarded Pacinian with a technology innovation award in haptic technology.

Pacinian officially is based in Spokane, with a tiny office in the Sirti building on the Riverpoint Campus, but its operations mostly are located in a 2,300-square-foot lab in an office building at 2065 W. Riverstone Drive, in Coeur d'Alene, closer to where some of its electrical, mechanical, and software engineers live, Schlosser says.

Another employee, Pacinian's vice president of business development, is based in San Jose, Calif., and travels the world talking to prospective customers.

Among the demonstration devices Pacinian has in its lab is an Apple iPad that Pacinian engineers have retrofitted with HapticTouch. Rather than just the glassy touch a user feels when tapping or swiping along the surface, the retrofitted iPad returns a tactile response when you touch the screen. A touch-screen computer monitor has been retrofitted similarly, and provides the same distinctive response to a fingertip when touched. Pressing harder provides a different response than just tapping or touching. In a video game simulation, pressing on the screen activates a machine gun, and the rapid pulse of the firing can be felt in your fingertip.

Pacinian's small staff has grown by three employees in the past year, and Telin, who previously was director of operations here for General Dynamics Itronix Corp., predicts it will grow to a staff of 30 to 50 employees within five years.

So far, the company has applied for 10 patents to protect its intellectual property, and one of those was awarded this past spring. Schlosser says it has another 10 to 15 potential patents being readied for filing.

Pacinian is owned by a small group of people that includes employees, family and friends, and some angel investors, he says, adding that currently, employees own a little more than half of the company. Among its board members are Johnny Humphreys, former CEO of Spokane-based Itron Inc.; Tom Turner, former CEO of what was then Itronix Corp. here; and prominent angel investor John Pariseau, co-founder of WIN Partners LLC, of Spokane.