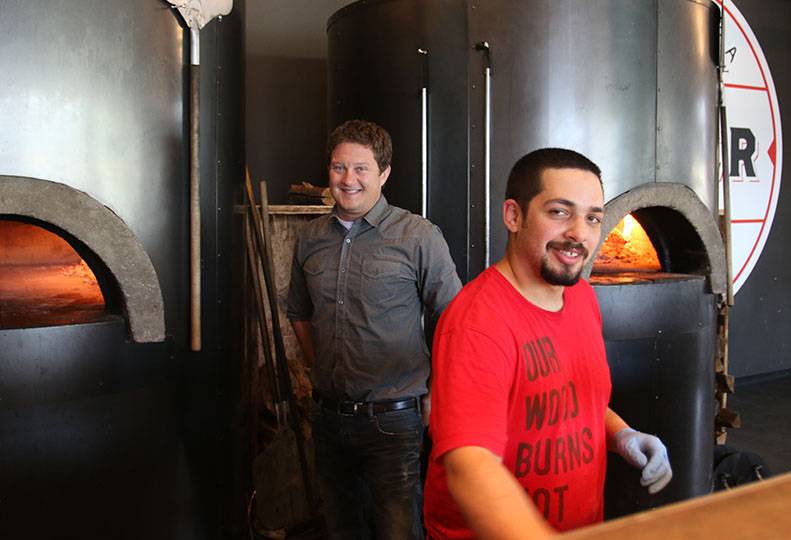 With six years of college, four different majors, and no degree earned, Matt Goodwin still had no idea what he wanted to do for a living as he started bartending at Fast Eddie’s Bar & Grill in 2000.

“I applied at Tomato Street and Fast Eddie’s, and they hired me first,” Goodwin says. “My first shift was the day I got hired. The first Long Iced Tea I made was blue.” The alcoholic drink gets its nickname because of its resemblance of taste and color to actual iced tea. There’s nothing blue about it, Goodwin says.

Despite that drink buyer’s objections, Goodwin, now 38 and one of those nominated for inclusion in the Journal’s Rising Stars special section, immediately fell in love with bartending.

Today, he owns and co-owns a total of seven different Spokane-area restaurants and taverns, and those businesses employ a total of about 120 employees, he says. He co-owns Fast Eddie’s Bar & Grill downtown, at 1 W. Spokane Falls Blvd., and Press, at 909 S. Grand Blvd. on the South Hill, together with business partner Jeremy Tangen.

Goodwin also owns the Volstead Act at 12 N. Post St. in downtown Spokane, the Backyard Public House at 1881 W. Broadway, and The Boiler Room at 6501 N. Cedar, in North Spokane. He says he also owns two Spokane-area Papa John’s pizza restaurants. Goodwin has been on a good run since he and Tangen opened Press in January 2009.

Goodwin’s businesses are part of Goodwin Group, Inc., with each establishment being its own LLC, he says. Even the MarQuee Lounge Goodwin and Tangen once operated at 522 W. Riverside downtown enjoyed a five-year run before they shut the nightclub down.

“I don’t want anything to do with that anymore,” Goodwin says of the nightclub business. “You basically have nine hours a week to make money; Thursday through Saturday from 10 at night to 1 in the morning.”

When the MarQuee closed two years ago, the owners wrote in their press release announcement: “The lovechild of local entrepreneurs Jeremy Tangen and Matt Goodwin, MarQuee Lounge, was born into the open arms of a city that desperately needed an outlet for late night entertainment, dancing, and questionable decision making.”

When he got his start as a bartender, Goodwin didn’t particularly think that would pave the way for his success in Spokane’s now flourishing restaurant industry. However, as he reflects on his past, he says he’s always had a strong current of entrepreneurialism coursing through his veins.

“The key was to find a house to rent, big square footage, a nice landlord, and become buddies with the football and basketball players to draw in the crowds.”

As for their recent success, Goodwin and Tangen say it doesn’t appear any of their current businesses will be scuttled anytime soon. Last October, Tangen opened Borracho Tacos & Tequileria located at 211 N. Division downtown. He says the restaurant is finally starting to hit its stride.

Goodwin says he doesn’t spend much time looking back, but does find himself sometimes surprised at where he is now professionally, compared with when he arrived in Spokane.

“I knew I needed a change, and leaving Western Washington University was the place to start. So I arrived at EWU in 1998, sight unseen, and promptly wanted to turn around and go home,” Goodwin says. Not long after arriving he secured the bartending job at Fast Eddie’s.

Though he enjoyed bartending, he says he knew it wasn’t a profession he wanted to do for the remainder of his career. As social media became more mainstream in the business community, that’s when he says he began developing his business strategy: attempting to place restaurants and taverns in locations where there aren’t very many, if any at all.

Goodwin says the Backyard Public House and The Boiler Room are good examples of that.

“I think they both serve an underserved niche. I’m kind of always snooping around for a good neighborhood restaurant and pub,” he says.

While he enjoys launching restaurants, he says the challenges are often daunting.

“My managers are excellent,” Goodwin says. “Each location has its own general manager. In this industry, turnover is very high, so it’s important to have managers who are effective at keeping employees engaged and interested in what they do.”

Goodwin’s business partner, Tangen, is a 31-year-old Spokane native. He splits time between running restaurants and taverns while serving in the Air National Guard, something he has done for 13 years. He says he chose the Borracho’s site because of its proximity to the University District.

“I graduated from Washington State University downtown in 2006,” Tangen says. “The campus was basically two buildings shared with other businesses. But you could see that that area was going to start to take off. The universities, the McKinstry Building, clearly that part of Spokane is moving in a direction that it hasn’t before.”

“From the restaurant’s end, we’re doing what we can to put ourselves in the best position possible,” Tangen says. “It was a steep learning curve, but we are finally getting to the place where I think we need to be,” Tangen says.

Both Goodwin and Tangen say they have placed a strong emphasis on giving back to the community. In addition to donating to local charities, they have allowed several local nonprofits to use their restaurants for their own fundraisers, including silent auctions.

“Spokane has been good to us,” Goodwin says. “We feel like it’s important to give back to the community.

Karli Ingersoll and her husband, Caleb Ingersoll, say they are committed to giving back to the community as well—Spokane’s art and music community. They opened their restaurant and performing arts hall, The Bartlett, located at 228 W. Sprague, a year and a half ago. Musicians themselves, they wanted to create a place where local musicians and music lovers could gather.

Karli Ingersoll, 29, is a Spokane native. The couple married in 2010. Caleb Ingersoll spent most of his life in Kennewick, Wash., and Salem, Ore. Karli Ingersoll says she’s largely had mixed feelings about her hometown, and the two had only planned to stay here for a year after they married.

During that year, however, the Empyrean music club at 171 S. Washington closed. That’s when she and Caleb, who is 28, began working on a business plan.

“It felt like we were looking for a place to locate forever,” she says. “But we found our niche and so far things have worked out well. It’s really fun, but it’s hard work.”

“Too me it feels like we reached our expectations quickly. But once that happens, especially when it comes to music and art, you know change is going to occur. What works well today is going to be something entirely different a year from now,” he said. To which his wife replied: “No, six months from now.”

The husband and wife duo say that even though they have the same passion for art and music, they bring different skill sets to their business that keep it moving forward.

“Caleb is the visionary,” Karli Ingersoll says. “He has the connections outside Spokane to bring in artists from outside the area. I focus on booking locally and the day-to-day operations of the restaurant.” She says the stress they experience has nothing to do with the fact they are husband and wife working together.

“We experience stress because we opened a business,” she says, laughing.