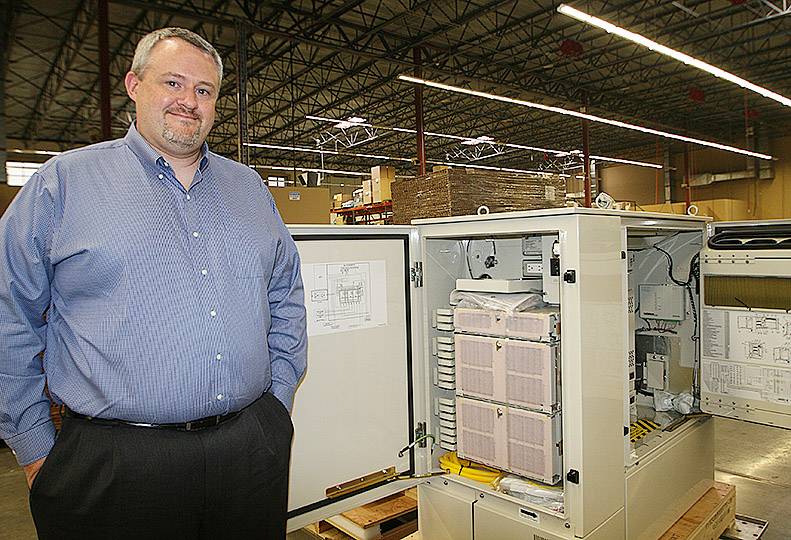 -—Judith Spitzer
Chris Craig, general manager of Purcell Systems, displays the inside structure of one of the temperature-controlled cabinets that the company manufactures at its Spokane Valley facility. The company employs about 100 people there. 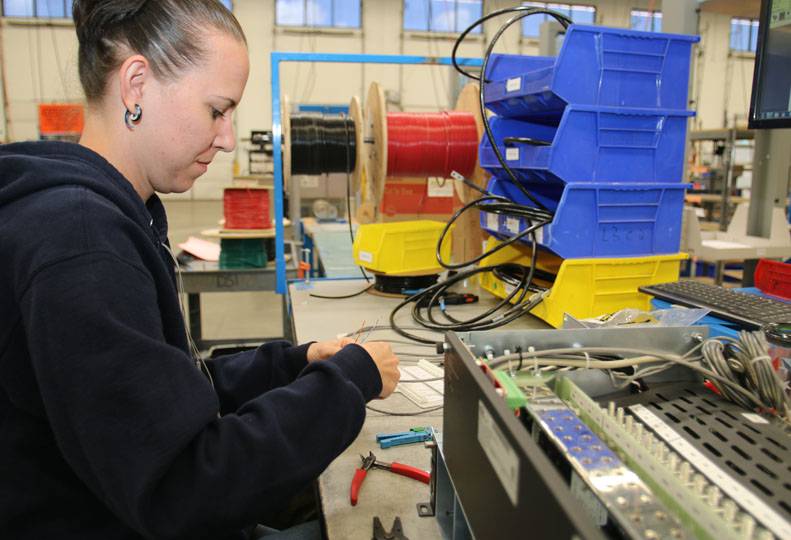 -—Judith Spitzer
Jackie Broadsword works at one of the assembly lines at the Spokane Valley plant of Purcell Systems, Inc. which makes temperature-controlled outdoor cabinets for the telecommunications industry.

Purcell Systems Inc., the Spokane Valley-based company that makes temperature-controlled outdoor cabinets for the telecommunications industry, is diversifying and expects 40 percent growth over the next fiscal year, says Chris Craig, its general manager.

Launched in 2000, Purcell Systems manufactures modular, outdoor, mostly metal, custom cabinets that protect electronic equipment from the elements. It has customers in telecommunications, utilities, the government, the military, and transportation.

Located in about 90,000 square feet of space at 16125 E. Euclid, with about 25,000 square feet of that space dedicated to manufacturing, Craig says Purcell typically employs about 100 people full time and, depending on volume and demand, will add from 40 to 100 temporary workers at times. Craig says Purcell is in the process of adding about six new employees mostly in engineering, sales and technical positions.

Purcell also has an international counterpart based in Stockholm, Sweden.

EnerSys, a global industrial battery manufacturer, purchased Purcell in 2013 for $115 million, and both companies have benefitted from the sale, Craig says. EnerSys, based in Reading, Pa., now has the opportunity to sell another product line to customers it hasn’t targeted before, he says. Conversely, with additional financial backing from EnerSys, Purcell will continue to move into other industries, such as the utility market, rail systems and smart transportation needs such as providing the cabinets for wireless communication.

During Purcell’s last fiscal year, which ended March 1, 2014, the company’s revenue increased 18 percent compared to the previous fiscal year, Craig says, declining to disclose specific revenue figures. He projects that the company’s sales will increase another 40 percent by next year. If the company hits its sales goals during the next fiscal year, it will need to add another five to 10 employees in manufacturing and tech support, he says.

Craig says because EnerSys is a publicly traded company, Purcell has had to implement a number of changes in reporting and compliance areas of accounting.

Previously serving as vice president of operations, Craig was appointed general manager about two weeks ago by the parent company. He says Purcell has retained its branding, and the offices and manufacturing plant here remain the same, but EnerSys is handling the sales staff.

“The sales organization is now rolled up under EnerSys,” Craig says.

In 2012, he says, Purcell responded to the slowing of the telecomm industry by focusing on reducing spending and increasing efficiency.

“That forced us to diversify,” he says. “And we started on the changes even before the sale to EnerSys.”

The manufacturing plant implemented a more efficient workspace, enabling the company to make product changes in sequence during assembly, which has “saved us a lot of money and time,” he says, adding, “We no longer have to change and discharge a line and set up a new one. We can do product B right behind product A without shutting down and setting up a new line.”

Today, Craig says the company has the total capacity to support $300 million in annual sales in the Spokane facility. “We’re underutilized now, using less than one-third of that today,” he adds.

While about 90 percent of Purcell business comes from national and international telecommunications companies, Craig says that will change over this year with the company’s diversification into utilities and the rail system.

He says smart transportation is one of the big areas for its outreach in the future.

“The rail system in this country is surprisingly manual,” he says. “And they’re just now evolving to wireless systems.”

Using high-tech sensors the rail system is moving toward wireless operation of track switching equipment he says, and all of the outdoor electronic equipment to support wireless will need protection from the elements.

Purcell is diversifying geographically as well, he says, since its merger with EnerSys.

“EnerSys is a $2.6 billion company and has a worldwide footprint,” he says. “But their global footprint is primarily in Eurasia and Africa.”

Craig says Purcell’s international footprint includes South America and the Pacific, giving both companies access to markets they haven’t had until now.

Purcell Systems also is developing new standardized products that will add to the company’s growth and diversification, Craig says.

“We are ready to launch standard global battery cabinets for the first time,” he says. “We will have a small number of basic configurations that meet product demand.” The new products will enable the company to take product orders and execute them without having to design each product from scratch. The company will continue to manufacture custom enclosures as well, Craig adds.

The company was co-founded in Liberty Lake by veteran Spokane entrepreneur Pete Chase, William Miller, and George Thompson. In 2005, a private equity firm bought out Miller’s and Thompson’s interests in the company. Chase left the company in 2013, before the EnerSys sale. Last year, Chase founded Columbia International Finance, a new venture through which he plans to connect foreign investors with developments in the U.S., specifically in Washington state.