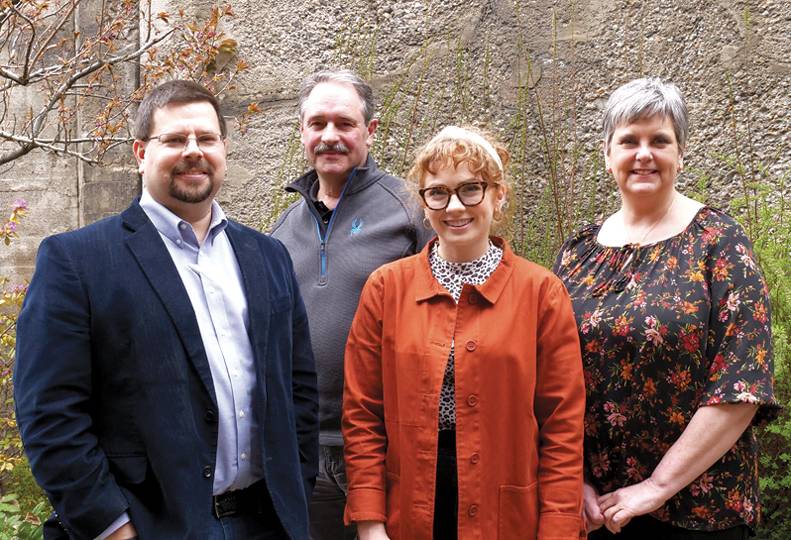 After more than 30 years in business, Bernardo|Wills Architects PC is changing its leadership, organization style, name, and branding.

Principal Dell Hatch, business manager Gretchen Renz, and associate principal Mike Stanicar will handle day-to-day operations at the Spokane-based firm, reporting to a board of directors.

The eight-person board will be composed of Bernardo|Wills’ existing shareholders and will be chaired by firm co-founder Gary Bernardo.

Bernardo will step into a more advisory role. The reorganization is part of the firm’s succession plan, Renz says. Bob Wills, the firm’s other co-founder, retired last year.

“This is going to position us for not just this transition of leadership, but the next one,” Renz says.

The reorganization process will also see each field within Bernardo|Wills—architecture, landscape architecture, and design—arranged into what Hatch calls “silos” each headed by a team leader.

“It’s creating opportunities for people to move up and to develop as leaders, to get some management skills by managing a sector and being responsible for business development in that sector, how the team is structured, and how the work is performed,” Renz says.

The firm has not yet decided on a new name but will settle on a moniker in the next few months, says Emily Meyer, client engagement manager. The firm also will change its branding.

“The new name will be more inclusive, to include all of the services that we offer,” Meyer says. “The new brand will be a refresh on looking at what we value, what our clients value, and what they come here for.”

Meyer says creating distinct divisions and placing longtime Bernardo|Wills employees in charge of each division is intended to benefit clients.

“There’s more clarity for our clients on who is (our) expert in that field,” Meyer says. “If they come to us with a health care project or a commercial retail project or an industrial project, they’ll have clarity on who leads that team, who will be doing the work.”

Meyer characterizes the firm’s project load as “nicely busy and on target to reach our revenue goals.”

The reorganization also invites employees to put down roots with the firm by placing them in charge of a team, Meyer says.

When the co-founders decided to incorporate landscape architecture services, they invited Hatch to join the firm.

“It started out as primarily direct service and support for all of the projects that we have in the office,” Hatch says. “It’s grown now to where there’s independent marketing of projects, and sometimes even working for other architects in the Spokane region.”

“We’re currently working with both the city of Moscow and the city of Pullman for downtown revitalization and improvements to their downtowns,” Hatch says. “Both are in the master planning phases right now and will move into implementation next year, after design work through the winter.”

Bernardo|Wills has been working with the city of Sandpoint, Idaho, for about three years to develop its parks offerings, he says, including renovating the city’s War Memorial Field from natural grass to artificial turf.

“Sandpoint’s my hometown, so I was excited to have an opportunity to give back and contribute to my hometown by being part of that team,” Hatch says.

The firm’s work with Sandpoint has led to work for the communities of Moses Lake and Chelan, he says.

Current and recent projects in the Spokane area include a $4.6 million Spokane Valley dermatology clinic, an $8 million Goodwill store in Airway Heights, and Selkirk Pharma’s $38 million, 147,700-square-foot manufacturing facility on the West Plains.