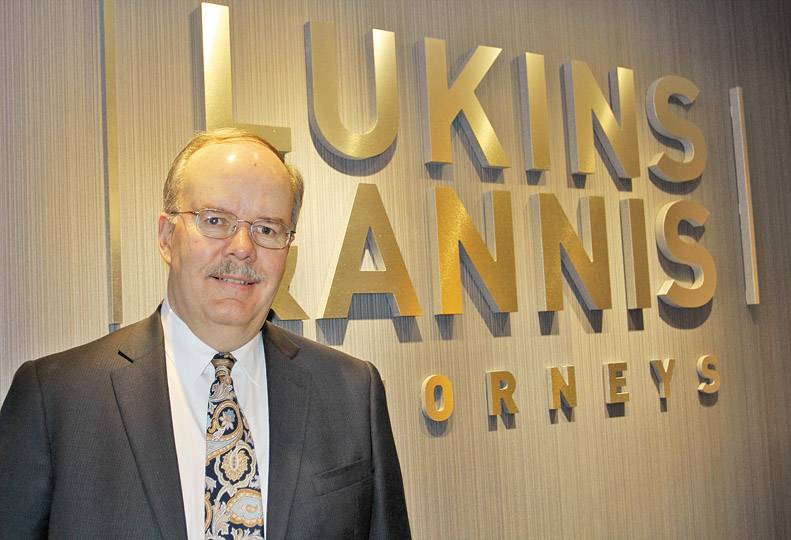 -—Kevin Blocker
Bill Hyslop, president of the Washington State Bar Association and a principal at Spokane-based Lukins & Annis PS, is the first Eastern Washington attorney to head up the statewide organization in 15 years. He’s spent most of his career at that firm.

Washington State Bar Association President Bill Hyslop says a lot of the work he’s done as WSBA president during the first half of his year-long term has been exploring how to make the justice system more affordable to low-income individuals and families.

Hyslop, who just turned 65, is a principal at Lukins & Annis PS in downtown Spokane. He’s spent most of his career at that firm since passing the bar exam in 1980. A former U.S. Attorney for the Eastern District of Washington from 1991 to 1993, Hyslop was elected WSBA president last year. His term started October 2015.

Hyslop is the first Eastern Washington attorney to be elected WSBA president in 15 years. Upon the completion of Hyslop’s term in October, he will be succeeded by Robin Haynes, a 38-year-old attorney with Spokane-based McNeice Wheeler Law Office PLLC. Haynes is the youngest attorney ever elected to become president of the WSBA and will be just the sixth woman to serve in that position.

Hyslop says he and WSBA leadership are continuing in their efforts to help poor people access basic legal services.

“The courthouse doors have to be open to everyone,” Hyslop says. “The justice system in this country doesn’t operate well unless there is access for everyone. That’s obviously one of the fundamental groundworks of our legal system.”

In 2003, the Washington State Supreme Court commissioned a special committee—on which Hyslop served—to study the challenges low-income people face in their attempts to get legal help. The report is based on a survey that concluded low-income households in Washington state face on average three legal challenges per day. Last year’s survey says that number has now tripled.

“Most of those folks that are in the 125 percent of poverty level cannot afford an attorney,” Hyslop says. “And many of those folks have crisis types of cases that directly impact how they live.”

The state bar association partners with nonprofit assistance programs such as the Northwest Justice Project of Spokane, Columbia Legal Services, and the Northwest Immigrant Rights Project to provide low- or no-cost legal services to indigent clients.

“We really work hard at providing legal services for low-income people,” he says.

Hyslop and a group of attorneys and judges from around the state will be in Washington, D.C., next month to lobby Washington state’s congressional delegates as they seek increased federal funding for legal services for low-income groups.

“This is an issue that we have to keep on the forefront at all times,” Hyslop contends.

The WSBA also is exploring remedies to address the exorbitant rise in civil litigation costs, a direct result of the public’s inability to afford legal representation, says Hyslop, who practices civil litigation for Lukins & Annis.

“We are seeing a huge increase in pro se litigation—people who come to court without representation that don’t necessarily understand the system and have difficulty navigating the system,” he says. “It increases the resources that are spent by judges on every case.”

The WSBA is a self-regulating body that reports its activities to the Washington State Supreme Court, Hyslop says.

“Ultimately, we are responsible to the court; we exist as a result of court rule and statute so we’re a quasi-governmental agency,” he says.

There are more than 25,000 Washington-based attorneys. About 3,000 attorneys, or 12 percent of the state total, live in Eastern Washington, says the WSBA’s 2016 Demographics Report.

Hyslop says the 127-year old WSBA, maybe for the first time in its history, is exploring the possibility of adding members from the general public to its board of directors.

“Most professional associations or groups have one or more community members that serve on their board,” Hyslop says. “As attorneys, we represent the public, we serve the public, so that’s one of the things we’re addressing, how to more effectively get the public’s perspective on what we do.”

His professional and civic activities list of accomplishments is lengthy. He earned the WSBA’s President Award in 2006, Washington State University’s Alumni Achievement Award in 2002, served as president of the Federal Bar Association of the Eastern District of Washington in 2006 and 2007, and was a member of the WSBA’s board of governors from 2000 to 2003.

Hyslop credits Lukins & Annis for the success he’s experienced in his career. The firm was founded in 1972, and Hyslop became a principal there in 1984.

Lukins & Annis’ areas of emphasis include business, banking, real estate, estate planning, labor and employment and litigation. Hyslop is one of 16 principal owners in the firm, which also employs nine associates, retains six of-counsel attorneys who are semi-retired and relinquished their ownership stake in the firm, and has a support staff of 53 employees.

Lukins & Annis’ main offices are located on the 15th and 16th floors of the Washington Trust Building at 717 W. Sprague.

The firm also has offices in Coeur d’Alene and Moses Lake.

“I love this place,” Hyslop says. “These are incredibly superb attorneys. We’ve served the Inland Northwest community for well over 40 years, and I expect we’ll continue for a long, long time. It really is an honor to work here with this bunch.”