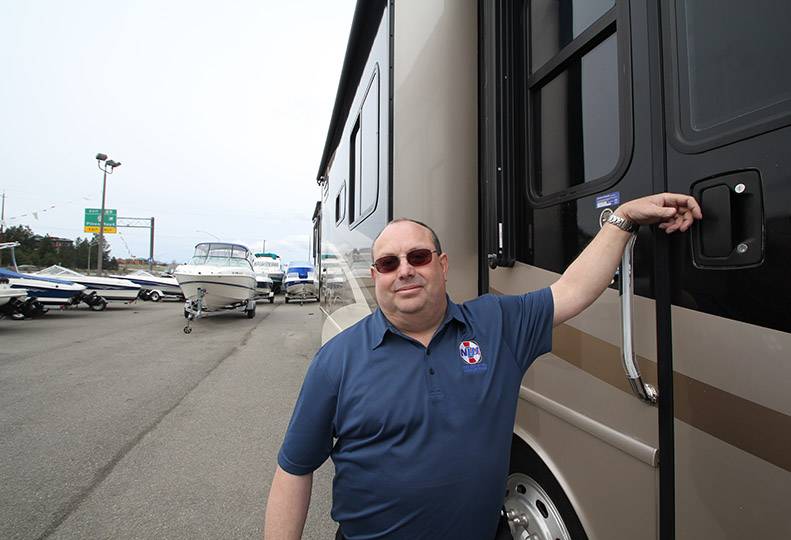 Northwest Recreational Liquidators Inc., of Spokane Valley, has created its own niche in selling lender-owned boats, recreational vehicles, motorcycles, and all-terrain vehicles, says Doug Stephens, one of the business owners.

The business works with 15 Inland Northwest credit unions to sell their repossessed RVs at prices much closer to retail value than they can get through dealer auctions, he asserts.

Stephens and business partners Jeff Allen and William "Red" Townsend own and operate NW Recreational Liquidators, which is located at 12802 E. Indiana, north of Interstate 90 and east of the Pines Road interchange, in Spokane Valley. Stephens is the administrator, Allen is the sales manager, and Townsend heads up the service department. The business has one part-time employee, Stephens says.

"Lenders were losing their shorts on auctions," says Allen. "We came up with a plan to sell on a retail basis for them."

Monthly auctions of repossessed vehicles are open only to dealers, which often pay far below the list value for used units, he says.

The business has sold boats for up to $150,000, with its largest transaction involving a 35-foot Regal cruiser, but most of its boat inventory is small to midsized runabouts.

Most items at NW Recreational Liquidators are not more than five years old. Vehicles generally are in good shape when they come onto the company's lot, Stephens says.

"We go through every unit," he says. "Most lenders authorize us to fix things that are wrong or aren't working."

Stephens says he checks with the National Automobile Dealers Association price guide and compares that with four comparable vehicles for sale in the Inland Northwest, when he suggests an asking price for a particular unit. NADA is an industry reference for used vehicles prices, including for RVs, boats, and motorcycles.

He usually recommends a selling price at the low end of the NADA value that's subject to approval by the lender.

For most units, the resale price doesn't recover the entire debt for the lender.

"Typical units are financed for 10 to 12 years," Stephens says. Due to depreciation, it generally takes longer than five years of payments for the original borrower to reduce the debt on a unit below the resale value, he says.

NW Recreational Liquidators' goal is to sell units within 60 days. The average turnaround is 39 days with a price within 90 percent of the NADA value, he says.

Allen adds, "Lenders recover more money, and it's a good deal for customers."

NW Recreation Liquidators' cut averages about 10 percent of the sale price, but varies depending on the lender, Stephens says.

Stephens contends that's lower than the sales margins at most dealers, which he claims is one reason lender-owned units don't move quickly at dealerships that handle used inventory.

"The first priority for dealers is their own inventory," he says.

"It's difficult to break into the major-bank market," he says.

Most banks send repossessed RVs directly to auction, he says. "They just want to liquidate them and get what they can out of them."

NW Recreational Liquidators hasn't been able to secure its own financing to buy bank-owned inventory that otherwise would be headed for auction, Stephens says.

"We don't have the capital to buy anything because we don't own anything," he says.

NW Recreational Liquidators' sales lot with a 13,500-square-foot showroom, service, and warehouse structure, is the site of a former Olympic Boat Centers outlet, where Stephens, Allen, and Townsend had worked together. Once one of the largest boat dealers in the West, Redmond, Wash.-based Olympic Boat Centers shut down in September 2008, with the company attributing its closure to a recession-related decline in sales.

Within a few months of the closure, Stephens says, a friend at a credit union asked for his help liquidating repossessed boats and RVs.

"We worked three months with that credit union," he says. "Then we started contacting other lenders."

In the beginning, NW Recreational Liquidators was based at a vacant lot behind Townsend's Valley home.

"We started with boats because that's what we knew," Stephens says, adding, "Jeff and I are longtime boat owners."

Sales have grown steadily, he says.

"Last year was our biggest so far," Stephens says. "We've had bigger and better inventory because we've been working with a growing number of lenders."

"Most will be attracted to something we advertise," he says, adding that the business advertises through online, print, and broadcast media.

"Our market is a little different because we don't have new products, and we don't carry particular lines."

Allen says about 60 percent of the customers either pay in cash or have their own financing. The rest borrow through NW Recreational Liquidators' finance partners or the original lenders, he says.

Stephens says it's always interesting to meet potential buyers who are planning activities of leisure.

"The business is a lot of fun," Stephens says. "We enjoy talking to people about the lighter side of life."