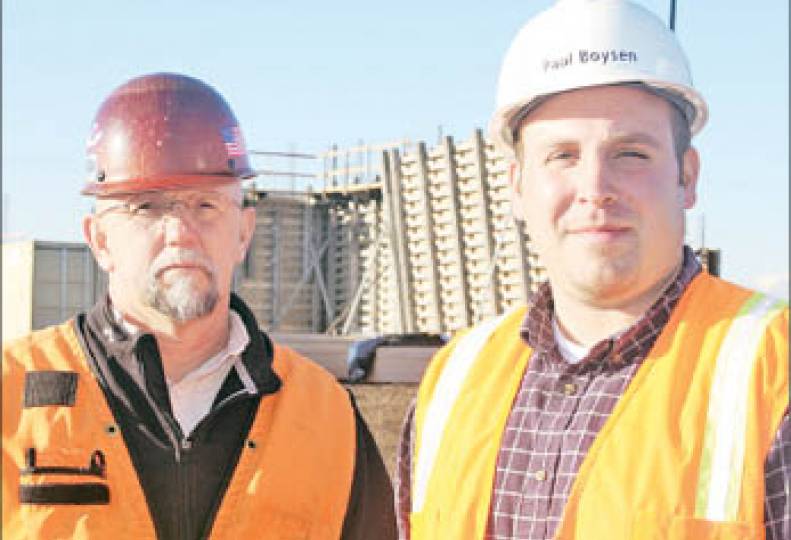 -—Staff photo by Jessica Valencia
Buzz Heston and Paul Boysen say the Providence Medical Park-Spokane Valley project, in background, is the fourth on which the contractor has used lean construction practices.

Spokane-based Bouten Construction Co. has changed the way it approaches projects by looking at how to cut waste from the building process, while increasing productivity and efficiency, through the business practice known as lean construction.

One project in which the longtime general contractor here is applying those methods is the $58 million Providence Medical Park—Spokane Valley that it's erecting east of Sullivan Road along Indiana Avenue. Although from the curb it might resemble any other commercial construction project, changes to internal processes and an increase in communication between Bouten employees and subcontractors have altered how workers on the job site will go about finishing the 132,000 square-foot outpatient facility.

Lean practices, pioneered years ago by Toyota Corp., center on a cultural mindset and practical methods that businesses can use to decrease inefficiencies and streamline operations.

Bill Bouten, president of Bouten Construction, says lean practices are used by large companies in other sectors, but lean hasn't been picked up to a large extent by the construction industry, particularly in the Inland Northwest. Bouten says key focuses for his company, in applying such management principles, include cutting down on construction waste, decreasing the distance and time workers spend walking on a job site, and increasing the quality of the overall project.

"For us, it's really maximizing the value and eliminating the waste," Bouten says.

Bouten superintendent Buzz Heston says in planning for the construction time line on a project, instead of beginning at the start date and working toward the completion date, Bouten starts at the end and works backward, using a lean process known as pull planning.

"If we can get them to make the schedule with us, it's a heck of a lot more likely to happen," Bouten says.

Heston says project foremen and subcontractors sit down and hash out the schedule, moving pieces around to create a timeline that flows from step to step in the construction process.

"There are two dates you can't change," Heston says. "The starting date and the end date. What you do in between is up to you."

Through this process, Heston says crews may notice they can complete a project faster than anticipated, in which case crews can build room for error into the schedule.

Heston and project manager Paul Boysen use a combination of brief meetings and technology to keep workers on the job site up to date on any changes. The conference room, which Heston says functions in some sense as a command center for the company, is laid out with whiteboards baring the latest plans, weekly goals, and the complete pull plan schedule from start to finish drawn up by the crews.

Another board acts as a message system, showing when subcontractors are requesting information from others and when they need that information by to proceed according to the schedule.

"Information is the key to lean," Boysen says. "Nobody wants to see their name on that board, because then they're inhibiting work flow."

Heston says Bouten has a supplier store on site at the Providence project that decreases the likelihood workers will have to leave the site to get materials. The store is checked and restocked twice a week by the supplier, Heston says.

"We supply the guys with everything they need when they want it," Heston says.

Supplying his crew with what they need also is helped by technology on the job site, where information can be relayed using its computerized plans, electronically mapped out work schedule, and an iPad.

Plans and schedules are updated daily to reflect any changes or obstacles that need to be addressed. Heston uses the iPad to note construction updates and to complete safety reports. The tablet enables Heston to snap photos and take notes, virtually completing reports before he gets back to the office, he says.

"Eventually what we're talking about is every foreman will have a tablet," Heston says, adding that it will further streamline communication and allow for more updates in real time.

Boysen says the Providence project will be the fourth major project in which Bouten has used lean from start to finish.

In 2010, the company began looking at ways to reapproach an industry that was flailing because of the economic decline, Bouten says.

"All of us out there were beating our heads against the wall trying to win these jobs," Bouten says.

The construction company picked up on lean practices after having executives attend a seminar in Boulder, Colo., held by the Lean Construction Institute. The conversion to lean practices started small, with an emphasis on how to work more efficiently, addressing the issue of waste on the job site.

"We said, 'If we can focus on how to get the waste out of labor, that's a good start,'" Bouten says.

For Heston and Boysen, applying lean to the job site took time and a change in how a project was laid out and prepared.

"All of a sudden, you don't just flip the light switch on and say 'I'm going lean,'" Heston says.

A culture change is involved, Heston and Boysen say. For Heston, it involved shifting how he operates as a superintendent. Familiar with being out on the job site, Heston says he had to get used to spending more time in the office and using technology more than he had previously.

Bouten says that culture change isn't always picked up so readily by subcontractors, with some wanting to adopt lean practices and others believing that lean is more of a fad that will disappear over time. He says he foresees more construction companies picking up lean processes over time, and the changes at Bouten continuing to evolve.

"We're in a process of creating a new culture at Bouten," Boysen says. "Not that the old culture was bad, but it just made it better."

Bouten says although the last few years have been difficult for the construction industry, he believes that economic hardship helped his company make the switch to lean.

"The recession is one of the best things that happened to us," he asserts. "We are a better company because of it."

He says that on each project, the company aims to cut the construction schedule by 5 percent with lean practices. He adds that for the Providence project, it's on track to meet that goal.

"The more people who know about this, the better it'll be for the industry," Bouten says. "It's so badly needed."