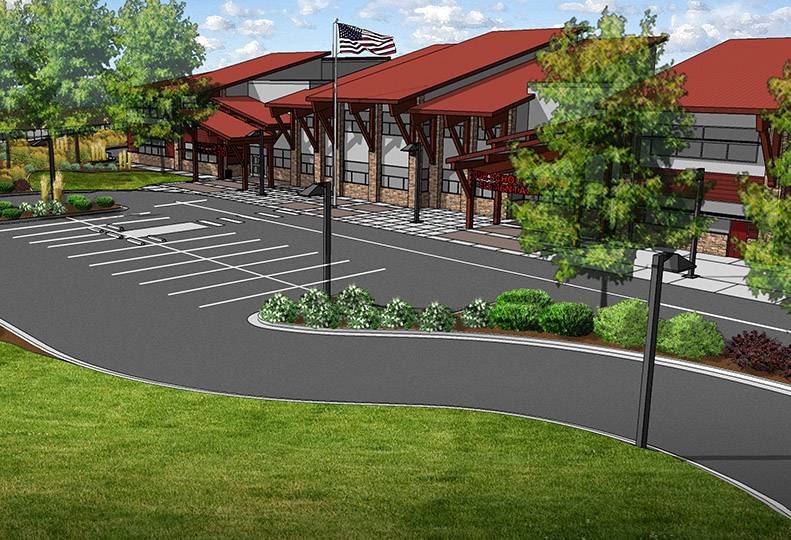 Three Spokane-based contractors have landed contracts for school construction projects throughout Washington state that are worth more than $100 million combined.

Lydig Construction Inc. began work in February on an $80.3 million contract to do a multiphase reconstruction upgrade of Auburn High School, in Auburn, Wash. Lydig's Bellevue office is handling the project.

Meanwhile, Walker Construction Inc. recently was awarded a $23 million contract by the Grand Coulee Dam School District to build a new K-12 school with the capacity for up to 660 students.

Additionally, T.W. Clark Construction LLC has two school projects under way that involve remodeling buildings for the Kennewick and Wenatchee school districts. In Kennewick, T.W. Clark has started a $1.6 million remodel of a building for a small project-based high school. Meanwhile, the Wenatchee School District hired the contractor for a $2 million project to convert a former hall of the Fraternal Order of Eagles into an alternative high school.

Lydig Construction broke ground in late February on the Auburn High School upgrade, which will be performed in three phases and is scheduled to be completed in July 2016, says Dan Jawort, a Lydig project manager based in Bellevue. The Seattle office of Spokane-based NAC|Architecture designed the project.

Jawort says the first phase of work, which is to be completed by July 2014, will include building 191,000 square feet of new space for classrooms, a cafeteria, and offices.

"That phase of the building is a two-story structure, but there is a wing of it that's three stories," Jawort says. "The building itself is going back to a more traditional masonry exterior and sloped metal roof."

For a second phase scheduled to start July 2014, Lydig will construct a 65,000-square-foot new building that mostly will consist of three new gymnasiums and locker rooms and will attach to the structure built in the first phase, Jawort says.

About 80 percent of the old high school structure will be demolished, with the exception of a performing arts center and auto shop building, which both will be integrated and connected to the main high school as part of the second phase of work, Jawort says.

In a third phase, Lydig will put in a new parking area, multiple tennis courts, a park greenbelt area, and two new baseball fields for the high school.

The high school, located at 800 Fourth Street NE, has had five expansions since 1950, and its aging buildings are no longer cost effective to operate and maintain, the district's website says. Voters approved a $110 million bond issue last fall to build the replacement school to serve up to 1,800 students, says Jeff Grose, director of capital projects. The current enrollment is about 1,600.

Meanwhile, Walker Construction expects to begin this month to erect a new 100,000-square-foot school for the Grand Coulee Dam School District that is designed to have two wings, one for grades kindergarten through sixth, and another for seventh through 12th grades. The state Legislature approved funding for the capital project, the district's website says.

Justin Paine, Walker Construction's project manager, says the two-story school structure is expected to be completed by September of 2014. The project site is located along Central Drive near Crest Drive in Grand Coulee, on now vacant land that mainly was occupied by the district's former Wright Elementary School, which was demolished last year.

The district's planning documents for the new school say that overall enrollment has declined, and existing facilities are in poor condition.

Dennis Carlson, the district's superintendent, says the new K-12 school is being built for 650 to 660 students and will replace three school buildings currently in use. Once the new school is completed, all of the district's students will move there from Center Elementary School, Grand Coulee Dam Middle School, and a classroom wing of Lake Roosevelt High School that is located near the new school site.

Carlson says students at the new K-12 school will continue to use portions of Lake Roosevelt High School, such as its gym, weight room, wrestling room, wood-welding shop, and auto shop.

Paine says the new school will have metal siding and rock exterior. The project will include a large retaining wall feature, a new parking lot, a playground facility, and polished concrete floors in the interior, he adds.

The Kennewick office of Design West Architects designed the project.

Lorraine Cooper, a Kennewick School District spokeswoman, says the remodel mainly will provide new space for the project-based Phoenix High School, which has 80 students, but the new location will allow for 120 students once renovations are finished.

The district-owned site, located at 1315 Fourth, also will provide space to open a small computer lab for the district's Legacy Online Program, through which students complete online classes outside of the school setting but meet regularly with a course supervisor at a district site.

T.W. Clark Construction expects to complete the project by the end of July to prepare for the start of school this fall. Students attending Phoenix High School will have work stations, meeting rooms, a science lab, and project-based creative work spaces similar to some corporate work environments, so the contractor is building nontraditional classroom spaces to meet that goal, Cooper says.

In Wenatchee, that city's school district also selected T.W. Clark to renovate the downtown former Eagles hall at 1510 Ninth Street for an alternative high school to serve just over 250 students.

Forte Architects Inc., of Wenatchee, designed the project, which is expected to be completed by mid-August.

Steve Sunleaf, a T.W. Clark project manager, says the remodeling of about 18,000 square feet of floor space will include removing interior finishes and reinstalling walls. Additionally, space will be converted into classrooms, common areas, offices, and a student learning center.