Cash buyers seek deals on distressed properties, but margins harder to come by 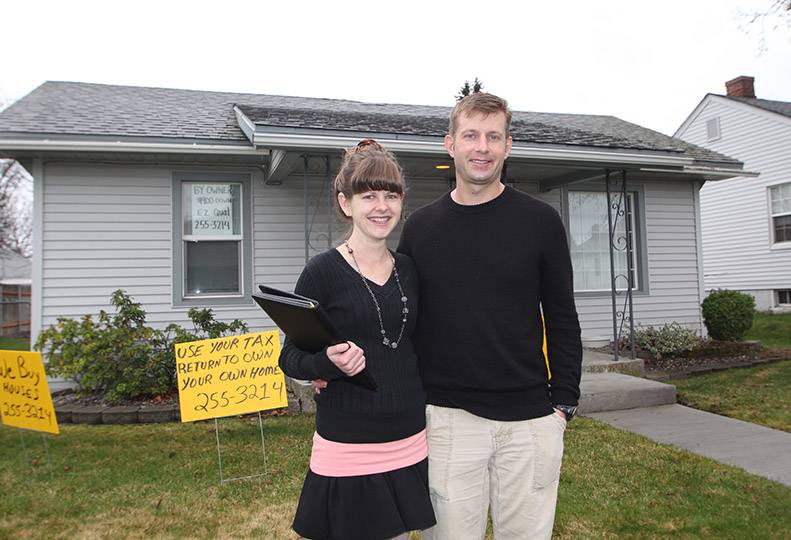 -—Staff photo by Mike McLean
Maya and David Murphy say they have bought six Spokane-area homes, including this North Side house, at distressed prices and are looking to buy up to 12 more this year.

Competition is heating up here for distressed sales of single-family homes, especially those priced at under $100,000, some market observers here say.

Distressed homes include foreclosed, bank-owned, and short-sale properties, which are sold under urgent situations, often below market value.

Since David and Maya Murphy have been investing in single family homes for a year, they've bought six homes at distressed prices of $55,000 to $85,000, or 50 to 70 cents on the market-value dollar.

The Murphys say they're looking to buy up another 12 houses this year.

Distressed properties in their target price-to-value range were readily available last year, but now the competition is fierce, they say.

Maya Murphy estimates that distressed properties they're competing for now are selling at prices 25 percent higher than they would have cost investors a year ago.

"We're seeing the number of people going after the same homes increasing, especially in the under-$100,000 bracket," she says.

The couple buys the properties with the goal to rent them out. Since financing from banks is tight, the couple sees a lot of people who "don't quite qualify" for bank mortgages.

"Generally, we offer a lease with an option to buy," she says. "If they can put up 10 percent, we carry the financing."

The couple has bought most of their investment properties through the Spokane Association of Realtors Multiple Listing Service. They also network through a real estate investors association, and they've bought one home through a wholesaler who charged a $5,000 finder's fee, Murphy says.

"We're seeing a good number of short sales and foreclosures," she says. "Spokane still has some (investment) opportunities, but the margins are closing a bit."

Dave Murphy adds, "There are still deals out there, but they're not as amazing as the deals last year."

Some first-time homebuyers also are looking at the distressed market for owner-occupied purchases.

Those buyers get the advantage of having the first shot at that market, because investors generally are locked out of bank-owned properties for 10 days, McCartney says.

Most first-time homebuyers, though, don't have the cash to put up for such purchases, and foreclosed homes often don't qualify for conventional mortgages, she says.

Because overall sales numbers are up, indicating growing consumer confidence, Higgins says he expects to see competition for distressed properties continue to increase.

"That's good, because we would like distressed properties to become a smaller part of the market, and it will be over time as the real estate market continues to heal," he says.

Glenn Crellin, Seattle-based director for research at the University of Washington Runstad Center for Real Estate Studies, says cash buyers, most likely investors, bought 14.8 percent of the homes sold through the Spokane Association of Realtors' MLS in 2012. That's down from 17 percent in 2011, but still the second highest percentage in more than a decade.

Crellin says the number of completed foreclosures reached a four-year low in 2012, which fueled competition for the foreclosed homes that did go on the market.

"The number of properties in some stage of the foreclosure process remains stubbornly high," Crellin says. "The pace of foreclosures simply dropped sharply last year. We're starting to see that pace pick up around the state."