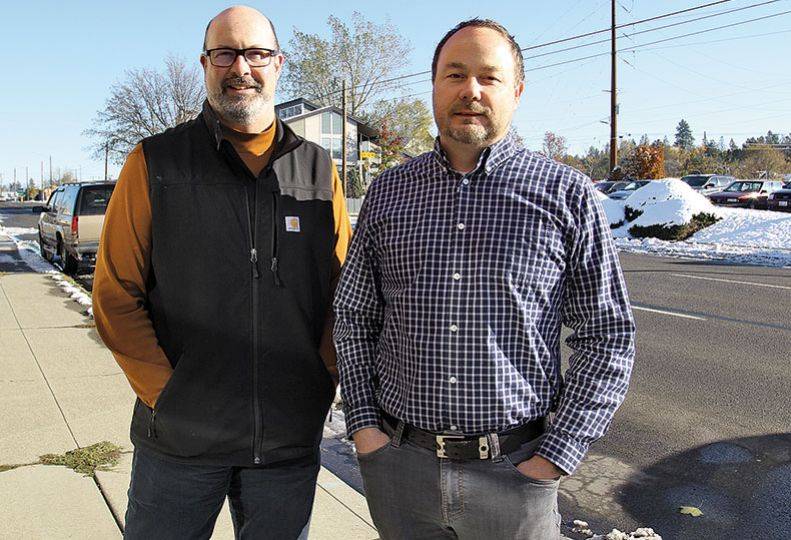 -—Karina Elias
Jeff Fountain, left, and Austin Dickey are part of a group that’s remodeling a building along Third Avenue for Copeland Architecture and for Liberty Ciderworks.

Austin Dickey and Jeff Fountain, architects and owners of the design-build company, Copeland Architecture & Construction Inc., have been steadily rebuilding the company’s construction division over the last few years back to the size it was in 2008, before the Great Recession.

Dickey says that the company cut several employees during the Great Recession, and the three owners at that time managed construction without field staff until 2018. At that time, the third owner, Bob Britton, sold his share of Copeland to Dickey and Fountain and started Bob Britton Construction Management.

Over the last four years, the company has regrown to a staff of nine, consisting of two architects, two superintendents, three carpenters, an office administrator, and an architectural intern.

The growth is occurring as the company makes plans to move into a 7,400-square-foot, 1930s-era commercial building at 217 E. Third, on the periphery of downtown Spokane, from smaller quarters at 121 W. Pacific.

Dickey says the new Third Avenue location includes a warehouse space that is ideal for Copeland’s growing construction division. Currently, the company has a storage unit along state Route 195 for its multiple trailers, a boom lift, a forklift, and other tools and equipment.

Once renovations to the space are complete, Copeland will have a centralized location from which to work and store equipment and materials, he says.

Copeland Architecture specializes in custom design-build residential projects and also provides commercial design services for office and retail projects. Fountain says the company will work on about 35 projects a year, of which about five will be full design and construction of residential projects from start to finish.

Fountain says the company’s projected annual revenue is $3.5 million. “That is our target for this year and next,” he says.

While the bulk of Copeland’s work is on custom residential projects, the company also has taken on projects  with Spokane-area nonprofits, churches, and clinics.

For example, Copeland has been working with the Hutton Settlement children’s home, in Spokane Valley, for a number of years. It designed the $4 million remodel of four cottages on the nonprofit’s campus. Fountain says Copeland is now working on an addition to the Hutton Settlement administration building that calls for adding a 2,200-square-foot executive office space. The project was stalled this year, but Fountain says he’s hopeful it will resume next year.

Hutton Settlement currently has offices in downtown Spokane that the organization wants to consolidate on the Spokane Valley campus, he says.

A few years ago, Copeland designed the $5 million renovation of the historic Spokane Fire Station No. 3 for Spokane Public Radio located at 1229 N. Monroe.

Copeland also has designed projects for Second Harvest of the Inland Northwest and Habitat for Humanity and has designed many commercial “facelifts,” says Fountain.

Fountain says that he gets calls from clients who have a Copeland home they would like to renovate or expand. He notes that Copeland was founded in 1985 and has built many homes over the years, some of which now have second or third owners. Many owners are surprised to know the company still has drawings of their homes. “Sometimes, I’ll make a set and give it to them regardless of where project goes.”

In recent years, the architects also have completed the remodel of two homes belonging to the company’s founder, Gerry Copeland.

Austin says, “It is fairly unique that we are architect led, drawing your home and then managing the realization of it.”

“Architecture is a service industry,” Fountain says. “It’s that customer service aspect of Copeland that we are getting back to. It’s working out well.”

The architects say they look forward to renovating the company’s new home base along Third Avenue. They plan an estimated $25,000 remodel that includes removing the siding of the building, removing the orange canopies, and giving the space a modern look.

Dickey and Fountain, in partnership with cider distillery Liberty Ciderworks, purchased the building and one-third acre of land, including the adjacent, vacant parcel, in April for $930,000 under the name Third Draft LLC.

Austin says Copeland also will perform the remodel work for Liberty Ciderworks, which Austin originally co-founded in 2012. In 2019, Austin sold his share to Ben and Jaime Pratt.

Third Draft LLC is a play on words when it comes to Liberty Ciderworks, architecture, and the Third Avenue location, explains Fountain, saying a third draft is about refinement and enjoyment of a finished product.

“On the design side, a third draft is about refinement,” he says. “On the cider side, I suppose if you’re doing a third draft, you’re really enjoying your product.”