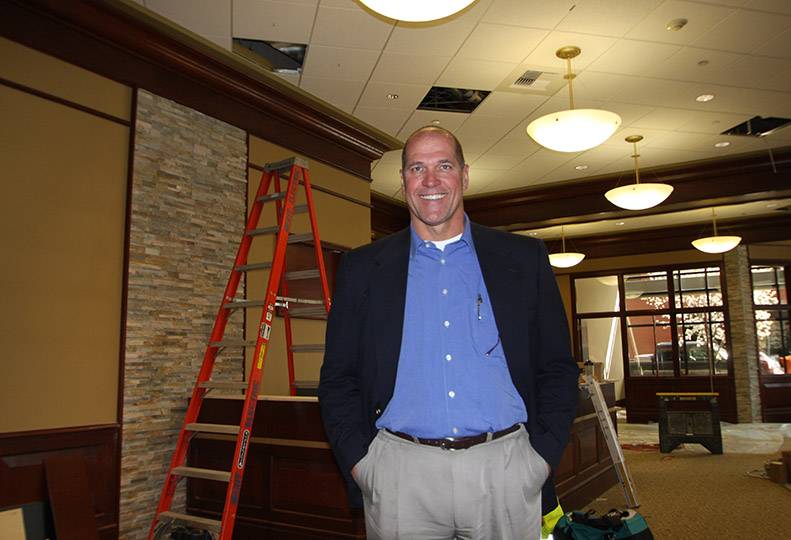 -—Staff photo by Treva Lind
Curt Hecker, CEO of Intermountain Community Bank, says the company's new branch in the former Bank of Whitman Building downtown will give it better visibility.

Downtown Spokane's large financial core soon will get bigger as three financial institutions are in position this year to launch new branches and expand business services there.

Intermountain Community Bank will be the first of the three to open, with a branch set to begin operating next week in 6,600 square feet of ground floor space in the former Bank of Whitman building at 618 W. Riverside.

Nearby, at 501 W. Riverside, Numerica has agreed to lease 3,000 square feet and plans to begin renovations in July on the ground level of the former First National Bank Building for its first-ever downtown branch, which is to open this fall.

Meanwhile, at the Hutton Building, at 9 S. Washington, Liberty Lake-based STCU is set to open its 17th branch later this year on the ground level of that seven-story structure at 9 S. Washington. It also plans to occupy two upper levels there, where it will move its commercial lending operations, says Tom Johnson, president and CEO.

"We intend to continue growing our commercial lending program, and it's logical for us to have a presence where those activities occur," Johnson says. He adds that regional activity for development, insurance, real estate, and financing primarily occurs downtown. "It's important for our future to drive a stake downtown and have an anchor presence there."

Sandpoint-based Intermountain Community Bancorp., which operates Panhandle State Bank and Intermountain Community Bank, has operated a downtown branch for several years in a fourth-floor, 5,200-square-foot space at 801 W. Riverside, which will close after the new branch opens. CEO Curt Hecker says the new downtown branch will allow the bank to grow the number of employees there from nine to 17, and provide more services to business customers.

"We also have a branch in the Valley on Sprague, and these two offices have been very successful in serving business customers," Hecker says. He adds that the new street-level space is better located with higher visibility.

Intermountain selected Baker Construction & Development Inc., of Spokane, as the contractor for the $185,000 remodel. Columbia Bank, of Tacoma, briefly occupied the space after that bank in 2011 acquired eight branches of the Bank of Whitman, which the Federal Deposit Insurance Corp. shut down. In 2012, Columbia moved its downtown branch to the Fernwell Building, at 505 W. Riverside.

Spokane Valley-based Numerica is in the early planning stages for its downtown branch, which will be its 17th overall, and the credit union hasn't yet selected a contractor, says CEO Carla Altepeter. "It's in a perfect placement in the middle of downtown in the middle of the financial sector," she adds.

She says Numerica will employ about six people downtown, including tellers and positions in mortgage and small business lending, and other business services. The branch will have a number of "hoteling" stations, which are workspaces purposefully left empty, for employees to do work there even if they aren't based there.

"Our initial plan is to serve the small-business community, but it is going to be a full-service branch," Altepeter says. "We will have a SBA manager and small business lender there, and a mortgage lender and other consumer product offerings as well."

She says a recent consultant study of its branch network confirmed the need for a downtown site. "There is a lot of potential in the downtown market, and that was a void in our branch network," she says. "Not only have we heard several requests for a downtown presence, but we also believe there is a lot of potential to serve not only the business community but people who work downtown."

STCU, which obtained the Hutton building through foreclosure last year, will move its commercial lending operations there from Schade Towers, at 528 E. Spokane Falls Blvd., although a retail branch will stay in that building. A branch that the credit union operates in Crescent Court's skywalk level downtown also will remain open.

STCU also is in the early planning stages for its Hutton Building renovations, but Johnson says plans call for retaining the historic features that date back to 1907.

He says STCU plans to modernize lighting, heating, and other internal systems while keeping the historic architectural integrity, though an exact project cost isn't yet known. STCU also is close to securing a contract with a real estate firm to develop and market business suites on unoccupied floors, he adds. In other sections, many current tenants will remain.

"We're looking at a firm that would take an overall development role with us," he says. "All of those internal structural building needs will be taken care of by us as the owner. Once that's done, for current tenants, we'll work with every one of those to improve their accommodations."

He adds, "The portions of floors vacant now will be prepared to a minimum level for all heating, lighting, and mechanical. We'll sell either an entire floor or half of a floor to a business or an investor. They'll have the freedom to finish out that floor how they want."

Meanwhile, the credit union's new branch there will occupy 1,600 to 2,300 square feet of floor space, likely in the northwest corner of the building, he adds.

"I think we're leaning toward the more generous range, probably 2,000 to 2,200 square feet," Johnson says. "We're considering taking both the sixth and seventh floors that would provide some growth space. The first department we'll move in once it's renovated will be our commercial lending operations from Schade Towers. We've maxed out that space."

STCU initially expects to have between 20 and 25 employees downtown, he says, with most of them in the commercial lending operations, and between three and five in the branch.

The 115,000-member STCU also is growing by about 1,000 members a month, Johnson says, adding, "It just seemed logical to the board and staff that we have a presence downtown as we continue to grow and service this marketplace."

Although a number of banks occupy prime real estate downtown, the financial core has room for more competitors, say the executives interviewed for this article.

"We believe there is," Johnson says. "I think the evidence points to that." He added that STCU and other credit unions began about a decade ago to do more commercial lending, "and there seems to be enough business for the banks and the credit unions. The end result is better products and services to the community. Competition is good for our local economy and keeps all of us on our toes."

Johnson says STCU projects a 6 percent to 8 percent growth in its loan portfolio this year for all of its loan types.

Hecker says the Spokane area offers a stable and improving real estate market area for businesses, and the city's core serves a large metropolitan area. He also says he expects growth in commercial and industrial lending.

"We have a strong base of customers in that market area now, and that includes manufacturing as well as the service industry," he says. "Existing businesses are doing expansions right now."

"We believe the economy has picked up, and we think the business community is looking for alternatives for their loans or commercial products," she says.