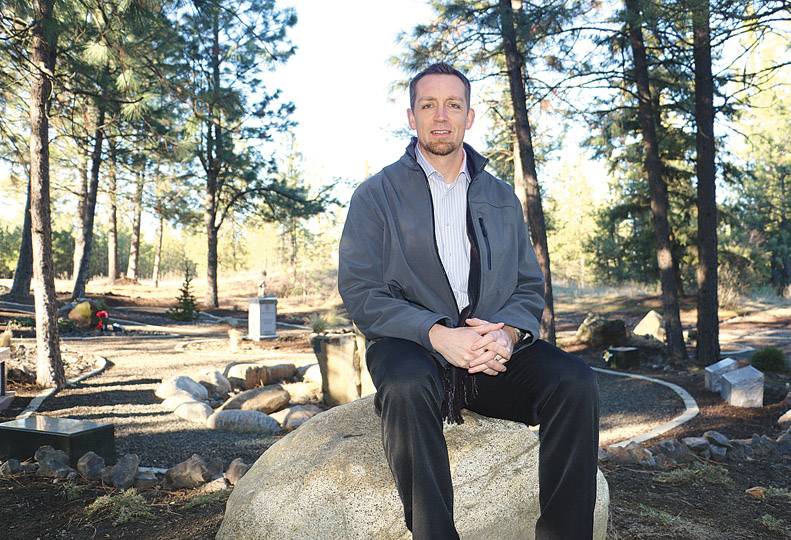 With the popularity of cremation growing, the Fairmount Memorial Association, a Spokane-based nonprofit cemetery organization, is extending a new choice for honoring someone who was cremated, called cremation gardens.

Fairmount has built three cremation gardens over about the last year and a half, says David Ittner, senior vice president of operations for Fairmount.

“They’re just kind of a break from a traditional cemetery,” Ittner says.

The gardens are all about a half-acre, he says, and feature gravel paths that wind through landscaped and treed areas.

“Along each side of the path are 3 foot-by-3 foot spaces, called burial plots, where someone can inter cremated remains,” he says. “We also have several options for memorialization, like granite markers and memorial benches.”

The cremation gardens have been popular, Ittner says.

“It’s one of our fastest-growing areas for people to purchase cemetery property,” he says.

“They can choose that and still have the ability to memorialize the person,” he says.

The cremation gardens can give family members and friends a place to come back to, which isn’t often so simple when remains are scattered or not interred, Ittner says.

“The memorialization part isn’t all about the person who passed away,” he says. “The other thing memorializing in our cemetery does is provide the vehicle for someone who’s lost someone and is in that state of grief to begin the healing process.”

Memorials in the cremation garden start at $350 and go up from there, depending on whether remains are to be interred and the size and location of the monument, Ittner says.

“What goes along with that is really a permanent record of who this person was and when they passed away,” he says.

A traditional burial grave space with Fairmount costs about $1,750, he says and a traditional cremation space in the cemetery will cost about $1,250.

Ittner is the current president of the Washington Cemetery, Cremation & Funeral Association.

“We have conventions and conferences and things like that,” he says. “We’re always getting together and talking about new ideas and ways to service families.”

Ittner says he thinks people choose the cremation garden because they want something other than a traditional cemetery space, not necessarily because it’s less expensive.

“These days, sometimes people aren’t fond of a traditional cemetery,” he says. “They’re fond of the landscaped layout of the gardens. We’ve got a water feature in the middle, and the spaces closest to it are more expensive, and people have been buying those up … so it’s not necessarily a price thing. I think it’s a personal preference.”

Cremation itself is a popular option here, Ittner says. Right now, the cremation rate in Spokane County is 72 percent, he says.

“Washington is typically No. 1 or No. 2 on the states with the highest cremation rates,” he says. “It’s definitely something we try to embrace.”

However, the national cremation rate is about 40 percent, he says. Ittner says he thinks the rise in cremation here could be due to a number of factors.

“Price is part of it, but I don’t think it’s the major issue,” he says. “It’s more of a change in tradition, or traditions going away.”

Ittner says that people moving around throughout life is part of the trend as well.

“As an industry, we need to do a better job of explaining the value of a graveside service and having a memorial to go back to,” he says. “There’s been a cultural shift away from that.”

One of the issues with cremation, Ittner says, is that people often don’t know what to do with cremated remains once they get them.

“They don’t know what to do, so they don’t do anything,” he says. “It’s kind of an unfortunate conclusion to the end of someone’s life.”

Looking toward the future, Fairmount is considering building at least two more cremation gardens at other Spokane-area properties, Ittner says. One of the other properties where they’re being considered is Riverside Memorial Park, at 211 N. Government Way, and another at Spokane-Cheney Memorial Gardens, at 5909 S. Cheney-Spokane Road.

“Every year, we sit down and see what the trends were, what were people purchasing, and what our inventory is,” he says. “Then we look to see where we need to put our investment dollars.”

In addition to more cremation gardens, this year the association is looking to build a new cremation niche and crypt area at an upper area of Greenwood Memorial Terrace known as the Greenwood Hilltop and that’s to be called Sunrise Vista, Ittner says. The initial investment for the project is $250,000, he says, and it will have 472 cremation niches and 20 crypts.

“Our future projects lean more towards cremation, again because that’s what people are wanting,” he says. “Some of the spaces have already been pre-sold.”

Because of its location and dramatic overlook of Spokane, the spaces at Sunrise Vista are more expensive than others in the cemetery, Ittner says. The cremation niches will run from about $4,000 to $6,000, and the crypts will be in the $5,000 to $9,000 range, he says.

“You wouldn’t think the view would matter, but it does to the family,” he says.

“Over the last 10 years, we’ve done 20 historical monuments,” he says. “They’re all dedicated to people who had a significant impact on Spokane.”

Most recently, the association built a monument for Louis Davenport, who established the Davenport Hotel and passed away in 1951.

“He had just a simple flat granite marker,” Ittner says. “We built a historic monument for him, with the cooperation of the family, and they attended the ceremony last summer for him.”

The organization also has a monument in Riverside Memorial Park dedicated to law enforcement officers and firefighters who lost their lives in service to Spokane County. Ittner says the memorial includes all the officers and firefighters who perished in the line of duty for all of the county’s history. The monument includes the name, rank, and birth and death dates, as well as an engraved photo of each person Ittner says. It also includes photos of and information about all K-9 police dogs here that died in the line of duty.

Fairmount also has a veteran’s flag program, Ittner says. The association flies more than 3,800 flags at several of its cemeteries during Memorial Day weekend, and each flag is dedicated to an individual service member, he says.

“That program started in 1971,” Ittner says. “A gentleman came into our office, and his wife had been previously married to a guy who was a vet, and he passed away. So he asked if we could put up a flag to honor (his wife’s first husband).”

“People usually donate a flag, and then there’s a small fee that goes to our endowment fund to pay for replacing the flag later on,” he says.