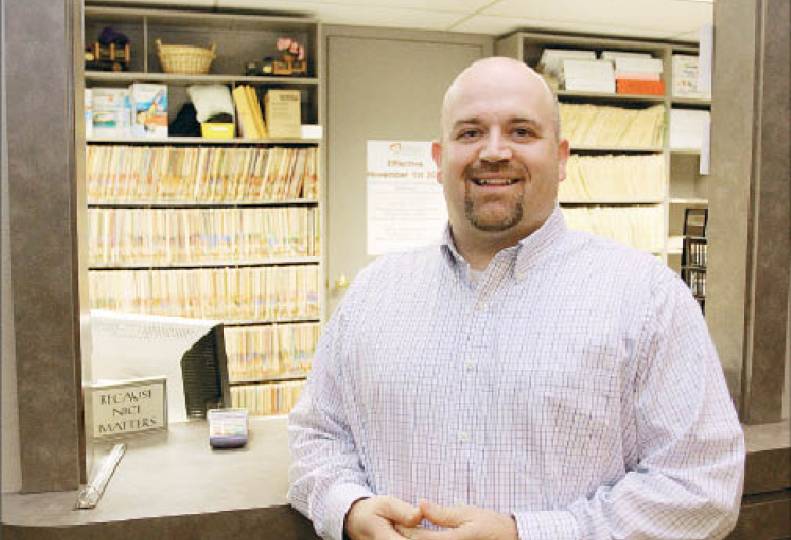 -—Staff photo by Mike McLean
Dirne Center CEO Mike Baker says the organization plans to move all of its services under one roof next year.

Dirne Community Health Center, a Coeur d'Alene nonprofit founded to improve community access to health care in North Idaho, is responding to dramatic growth in demand for its services with plans to move to larger quarters to make room for additional paid and volunteer providers and staff.

The center, which includes a family medicine practice, a dental clinic, a mental health center, and a homeless health outreach program, expects it will provide services to 12,000 patients this year in more than 50,000 visits, says Mike Baker, the Dirne center's CEO. That's up from about 8,100 patients who totaled about 33,100 visits in 2009, Baker says.

The Dirne center plans to move its medical practice and its mental health center to 1090 W. Park Place, north of downtown Coeur d'Alene, by January to accommodateanticipated continued growth in demand for services, he says.

There, it will occupy 18,700 square feet of space. Baker says Dirne center's goal is to offer all of its services under one roof, and it plans to move its dental clinic to Park Place by the end of 2012.

The new home for the medical practice will have 19 examination rooms, up from 14 rooms at its current location.

"We'll see more people," Baker says. "We serve a population that needs access. Many people don't have health-care insurance, and some don't have incomes."

The center primarily serves residents in Kootenai and Shoshone counties, although patients come from throughout North Idaho, he says.

"We don't turn patients away regardless of their ability to pay," Baker says. "Right now, there is no waiting list. Patients can get the care they need in a reasonable amount of time."

The Dirne center currently has about 20 paid providers, including physicians, counselors, physician assistants, and nurse practitioners, and a total support staff of about 55 people, he says.

In addition to providing more room for its paid staff, the larger space in the building on Park Place will provide more opportunities to accommodate volunteers. Currently, about 150 volunteers are affiliated with Dirne. They often share facilities with paid staff, work at a Dirne center facility in the evenings, or provide care for the center's patients at their own offices.

"We have a strong history of volunteers," Baker says. "Right now, we have no extra space for new volunteers to land."

The Dirne center currently operates on a $3.5 million annual budget with the majority of funding coming from patient fees. About 25 percent of the budget comes from the federal Health Resources and Services Administration, and some comes from community donations.

"We save the system money," he says, adding that federally subsidized community health centers serve 14 percent of all Medicaid recipients at a cost of 1 percent of Medicaid expenditures in the U.S.

Funding for new or expanded programs and services, however, will be harder to come by, he says. The Dirne clinic had been seeking federal funding to open branch clinics in Post Falls and in neighboring Shoshone County that eventually would have allowed it to serve an additional 15,000 people annually, but proposed funding was "gobbled up in the last near-government shutdown," he says.

As a nonprofit, the center's revenue is directed toward maximizing services to reach more patients, Baker says.

Federal and state assistance programs often pay below-market rates for health care services, causing some providers to limit the amount of Medicaid and Medicare patients they serve, Baker says. Dirne's nonprofit business model, however, allows it to target such patients.

"Sometimes they feel there's nowhere to go, but we welcome patients with Medicare and Medicaid," he says.

Medicare is the federal health-care assistance program that primarily serves people age 65 and over. Medicaid is managed by states and is funded jointly by state and federal governments to assist indigent and disabled people and low-income families with children with certain health-care expenses.

Still, though, 63 percent of Dirne's patients are uninsured, a rate that's climbed steadily since the recession hit, Baker says.

"A lot of people coming in recently had been working jobs that had insurance, and now those jobs are going," he says, adding, "A lot of working people make too much to qualify for state and federal assistance, but not enough to afford health insurance."

For those who have income, the center has a sliding-scale fee that charges between $25 and $100 per visit.

The Dirne center chalks up the difference between discounted fees and market-rate fees to charitable care. "Last year we provided $3 million in charitable care," Baker says.

"It opens the door for someone else to come," Baker says.

The Dirne center originally was incorporated as Dirne Community Health Clinic in 1986 and operated as a free clinic two nights a week, run by volunteers, with in-kind contributions and local donations.

After receiving federal funding in 2004, the clinic became a full-time community health center.

By 2006, the center added behavioral health and dental divisions, which last year handled about 6,800 and almost 6,000 visits, respectively.

Baker says two mental health conditions—depression and anxiety—are the first and third most common diagnoses at Dirne. He attributes much of that to effects of the down economy, such as high unemployment coupled with loss of health care coverage.

The center is named for Lidwina Dirne, a Dutch immigrant and former schoolteacher who came to Kootenai County by way of Canada following World War II. She envisioned the clinic as she and others helped provide care for a friend—a single mother with disabilities—who had no access to health care.

Dirne, now 95 years old, remains on Dirne center's board of directors, at least half of which is required to be made up of users of the center.