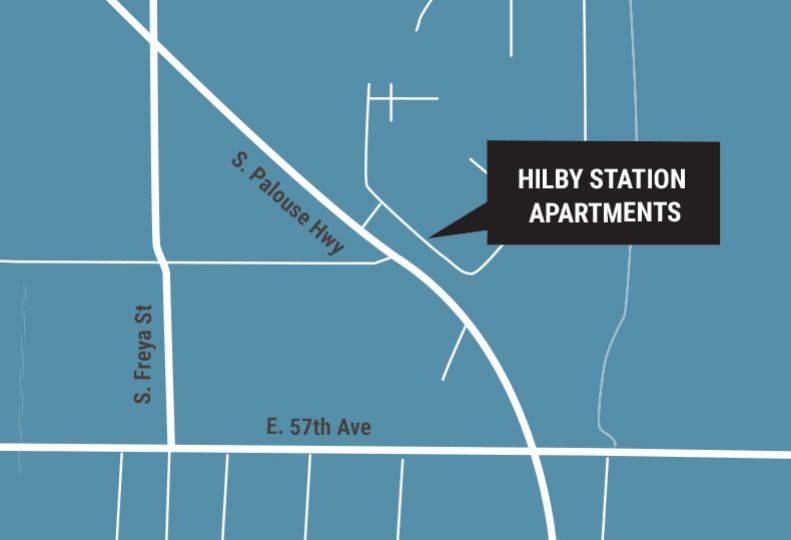 Spokane County has issued building permits for what appears to be an $8.5 million new phase at Hilby Station, an apartment complex at 5317 S. Palouse Highway on Spokane’s South Hill, records indicate.

Two four-story, 32-unit apartment buildings valued at $3.7 million and $4.2 million, respectively, are planned for the site. One will have a total of about 38,500 square feet of living space, and the other will be somewhat larger, at 43,500 square feet. At least two units in each building will be set aside for permanent residences, building permits indicate.

Seven additional building permits with a total value of $594,000 also have been issued for new parking garages. Those structures will vary in size, ranging from six to 14 garages in each structure, for a total of 72 garages, records indicate.

Located off of Palouse Highway, near 55th Avenue, the Hilby Station apartment complex currently has five buildings of similar size on a 7.3-acre parcel, the Spokane County Assessor’s website indicates. The new phase will be constructed on a neighboring 2.7-acre parcel of vacant land purchased by Douglass Properties LLC last September.

The transaction involved four parcels totaling nearly 1 acre in size at 230 N. Division, which Douglass’ company has acquired from Robert and Louis Sterling, of Spokane, for $2.6 million.

Earlier development concepts aired there in recent years have ranged from a $20 million, six-story apartment complex to a $50 million, 35-story mixed-use tower.

Before that, in 2015, Douglass proposed developing a mixed-use, 26-floor Falls Tower high-rise at that location. The Falls Tower predevelopment application described an envisioned 16,000 square feet of commercial space, and a 10,000-square foot outdoor plaza on the ground floor, six floors of parking, 19 floors of apartments, and 5,400 square feet of top-floor common space.