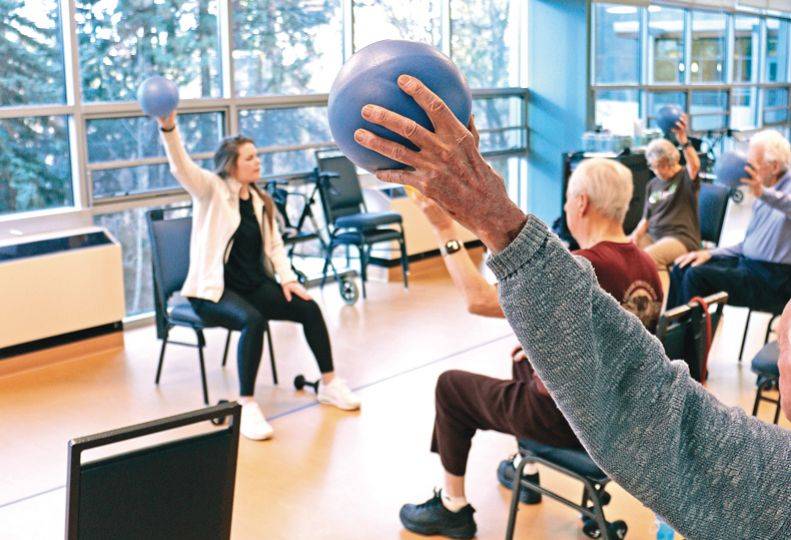 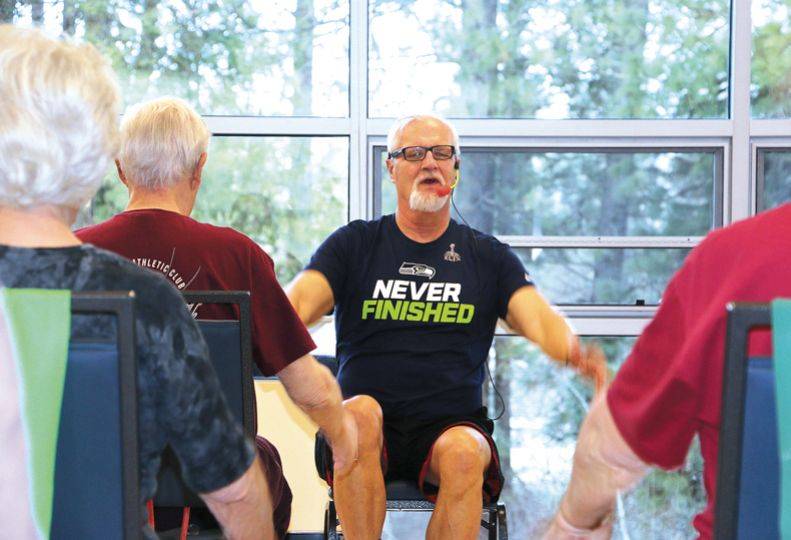 Exercise trainer Jessica Clark takes a seat at the front of the fitness room and prepares to get her class ready. A group of residents at Rockwood Retirement Communities South Hill are sitting in chairs as well as they prepare for their morning workout.

The music starts, and from their chairs, Clark guides the group through an hour-long workout. The group lifts their arms and legs in unison as she leads them through a series of chair calisthenics while offering motivation along the way.

“The gentleman in the front is legally blind, so I have to be very mindful with my verbal cues because he can’t see the examples I’m able to present to the class,” Clark says.

That particular class is advanced in years and lacks the physical stamina to execute many of the exercises on foot for very long, if at all, she says.

As seniors live longer, some Spokane-area retirement communities and nursing homes are more focused on improving their exercise space in an effort to help their residents continue to stay active.

“It was all a part of the huge renovation of Summit Tower. It’s complete with a group exercise studio, a spa and salon; it was all done in our effort to be responsive to residents’ interests,” VanMansum says.

At Rockwood South Hill, facility operators built a 2,250-square-foot fitness center, a 1,100-square-foot group fitness studio, and a salon and spa with 2,300 square feet of space. The adjoining corridors connecting the facilities amount to a total of 7,600 square feet dedicated exclusively to exercise and fitness, she says.

Meanwhile, representatives of the Touchmark on South Hill retirement complex at 2929 S. Waterford, near the southeast corner of 29th Avenue and Pittsburg Street, recently met with Spokane city planners to discuss a proposed $14.6 million construction project that would include a new memory care building and a fitness facility.

Of that proposed amount, almost a third, $4.8 million, would be dedicated to a health-and-fitness club, preliminary planning shows.

“We’re in the due diligence process of acquiring some adjacent property to add a health and fitness club that would include specialized exercise equipment designed to support older adults’ fitness needs, space for classes, and a heated indoor pool,” says Dave Cox, Touchmark on South Hill’s executive director.

Touchmark wants to build a 12,000-square-foot, single-story building to house a lap-and-therapy pool and a spa, an aerobics and exercise room, lounge and office space, equipment rooms, and locker rooms.

The facility would be intended for use by Touchmark residents and 55-and-older members of the surrounding community, the application submitted to the city of Spokane says.

According to the American Academy of Family Physicians, almost all older people age 65 and over can benefit from additional physical activity. Regular exercise is believed to help prevent chronic disease, can improve mood, and lowers chances of injury.

At Riverview Retirement Community, the big senior complex at 1801 E. Upriver Drive, administrators built an aquatics and fitness center a few years ago. The $4 million-plus facility is more than three times the size of its previous facility.

The facility also has an indoor walking track, an exercise studio, a meeting room, and a locker area that also has five changing rooms with showers.

On Riverview Retirement Community’s YouTube channel, which is posted on the retirement center’s website, Jennifer Corppetts, who serves as the aquatics and fitness coordinator, says the upgraded fitness facility has something to offer everyone.

“I want everybody to find something that they can do to stay active,” Corppetts says in the video profiling the facility. “The residents love it because it’s an extension of their home. They’re very prideful of this place. A lot of them have formed groups to work out together.”

Corppetts says exercising with at least one partner often enhances motivation for each participant.

“Anything to get moving to make their legs stronger, to be able to go up and down steps … I do believe that it does get them excited to want to do something,” she says.

At Rockwood South Hill, VanMansum says the fitness center is part of a comprehensive seven-prong approach the retirement community strives to see its residents participate in.

In addition to fitness classes, off-campus hiking is available to interested residents, as are snow-shoeing and Bloomsday training. A dog park was also recently built on the 90-acre campus, she says.

As for Clark, she serves as Rockwood South Hill’s fitness director. She estimates 60 percent of Rockwood South’s 400 residents are involved in some form of physical activity.

Classes offered include functional fitness, circuit training, balance and mobility, core and balance, yoga and aquatics, and exercises classes for those confined to wheel chairs.

Additionally, different levels of all classes are available for those who are fitness novices to residents who are in more advanced conditioning.

At age 30, to date, Clark says her current position is the “best job” she’s ever had.

“Oh, my God, I love it, I absolutely love it. Working with seniors is a million times more rewarding than working with people my own age,” she says.