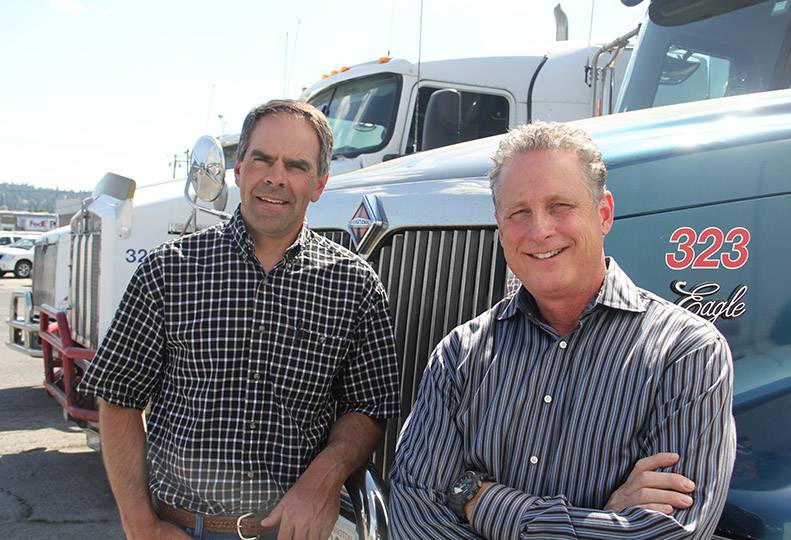 Compass handles customer-managed shipping orders using its proprietary website, which allows a customer to search for space on shipping trailers nationally and to find the lowest shipping rates for freight, Barnes says. Essentially, he says, it does for the shipping industry what Expedia.com and other travel websites do for the hospitality industry.

Meanwhile, Fast Way, a shipping and distribution company here located at 1001 N. Havana, has rebranded its business, a process spurred on by its purchase of competitor Spokane Transfer & Storage Co. a year and a half ago. The rebranding has included changing the logos of both Fast Way and Compass to incorporate elements of the logo of Spokane Transfer.

Barnes says Compass was up 60 percent in revenue in the first quarter compared with last year, an increase he attributes to the Spokane Transfer acquisition and a surge in service demand as it enters the company's busy season.

Barnes and Fast Way co-owner Jeff Bosma own Compass with Rick Cornwell, who was a founder of the brokerage company four years ago.

He says it decided to change the name from Compass Distributing to Compass Freight Management to clarify the purpose of the business.

"When (brokerage operations were) mixed into Fast Way, it was hard to tell what was the trucking revenue and what was the brokerage revenue," Barnes says.

Located near the northwest corner of Broadway Avenue and Havana Street, the two companies operate out of 3,600 square feet of office space that's connected to a 16,000-square-foot shipping terminal. Barnes says the loading dock has 92 doors, of which Fast Way uses about 60. The rest are used by Peninsula Truck Lines Inc., an Auburn, Wash.-based trucking company that Barnes says Fast Way partners with to deliver freight.

The company also has a 5,000-square-foot shop on the grounds that it uses when repairs are needed on its trucks, he says.

Barnes says the rebranding of Fast Way and Compass was carried out by The Purple Turtle, a branding company here.

The new logo, Barnes says, incorporates elements of the former Spokane Transfer logo, particularly the tapered edges, and three-line design that's a nod to the eagle in that company's logo. It also keeps the red, white, and blue color palette used by both businesses.

The design company reworked the Compass brand also, Barnes says, incorporating a red compass needle into the "m" of the logo.

Fast Way is what Barnes describes as a short-line shipper, meaning it handles shipping freight within Washington and Idaho. He says it mainly handles less-than-truckload freight, or LTL, which is considered freight larger than a package someone could mail, but smaller than a truck's trailer.

Compass is what's known as a third-party logistics provider, meaning it queries shippers across the country to find the most affordable or fastest option. Unlike Fast Way, Compass' customers can manage their own freight online, pick a carrier, and track shipments. Freight can be shipped throughout the country through that division, he says.

Fast Way's shipping terminal is adjacent to the Havana Street bridge that runs over the railroad lines just northeast of the trucking facility. Plastic and cardboard placards above each bay within the shipping terminal show the destination of a truck that would dock at a bay, and stacked in the center of the terminal is Fast Way cargo headed to a number of locations throughout Washington and Idaho. A large blue agricultural machine sits ready for shipment next to two identical pieces of red mining equipment. At the end of the loading dock, an employee unloads a shipment of carpet from a truck.

Barnes says the shipping terminal also acts as a hub for larger shipping companies, such as Con-way Inc., of Ann Arbor, Mich., which drops off cargo at Fast Way, and the Spokane-based distributor ships it to smaller towns within the Inland Northwest.

The company has a fleet of 65 semi-trucks it uses for distribution. It received 30 of those from Spokane Transfer, with a number of trailers still bearing that company's logo. Barnes says it's waiting to rebrand the fleet until it purchases new trucks in the future.

Bosma says Fast Way plans to upgrade its trucks with new software and satellite capabilities that will enable dispatch and customers to track shipments when they're out for delivery. That process is expected to begin during the third quarter of this year, and the company plans to upgrade 10 percent of its fleet by the end of the year.

Barnes says it's entering its busy season, which runs from now through October.

"So much of what we deal with is agriculture, mining, construction, and logging, and so much of that is fair-weather industry," he says.

Bosma says so far this year Fast Way's revenues have been comparable to last year at this time, adding that the company's focus has been on merging Spokane Transfer into its operations, but he says he anticipates full-year revenue growth of 5 to 10 percent this year.

"We feel like the last few years after the recession, we felt it," Barnes says. "We're getting good traction, and we're excited about this year."

Bosma says the company plans to be more aggressive about adopting new technology, such as through the current planned upgrades to its fleet, adding the company is comfortable with its presence within the Northwest.

"We don't envision growing a lot larger in the region," he says, Instead, the company plans to look at opportunities to expand within its existing market. He says it's looking at the possibility of running dedicated routes and nighttime delivery schedules for some customers. Barnes says with more companies choosing to get rid of or reduce their own delivery fleets, he anticipates seeing some added business from that transition, specifically due to fuel prices and the cost to maintain those trucks.

As for Compass, Barnes says it's anticipating solid growth this year in shipments processed.

"We're not restricted to this region," he says, adding he believes the company will process between 3,500 and 4,000 shipments, up from 2,500 shipments last year.

Along with its operations here, Fast Way also has a warehouse in Lewiston that Spokane Transfer previously had leased.

Fast Way was the second largest trucking company in Spokane last year, as ranked by the number of employees here, according to data gathered for the Journal's 2013 Book of Lists. In 2011, the carrier logged 1.7 million miles with an average length of haul of 140 miles.

Spokane Transfer, formerly owned by Doug and Dave Ross, had operated here since 1964. It employed 49 people before closing its facility at 407 N. Perry in 2011.