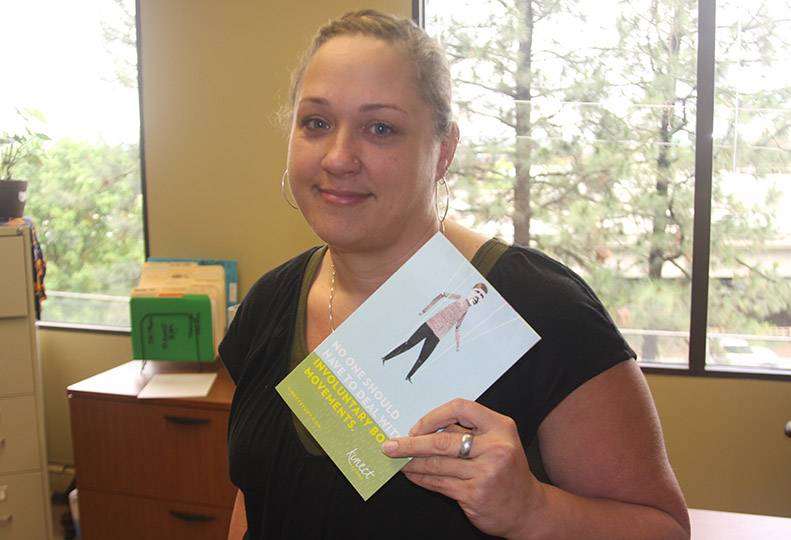 -—Staff photo by Linn Parish
Frontier Institute's Melissa Hampton says medications currently on the market address symptoms of tardive dyskinesia, but the drug being studied would treat the disorder itself.

Frontier Institute, the Spokane-based nonprofit research arm of Frontier Behavioral Health, formerly Spokane Mental Health, is participating in an early phase of research on an experimental drug intended to treat a serious side effect of antipsychotics.

People who develop the condition often are schizophrenics who are on certain types of medications to treat the mental disorder. In other instances, a drug used to treat gastrointestinal problems has caused the motion abnormality. Regardless of cause, the condition doesn't subside after a patient stops taking the drug.

"There are medicines to treat symptoms, but there's not a treatment for tardive dyskinesia," Hampton says. "If this is proven to work, it would be the first thing like it."

Dr. John Tran, medical director of Frontier Institute, says, "This research trial is so exciting because it has the potential for real success in an area that has previously been so frustrating for patients."

Schizophrenia is a serious mental disorder through which sufferers hear voices or have hallucinations and develop paranoia. Often, sufferers have a family history of mental disorders, and once schizophrenia develops, it doesn't go away, Hampton says. Antipsychotics prescribed to schizophrenics generally are intended to ease some of the condition's effects and give a sufferer a better chance of developing socially acceptable behavior, she says.

Tardive dyskinesia involves involuntary, often exaggerated body movements. It most frequently affects a sufferer's arms and legs, but it also can cause scowls and other unusual, unintended facial expressions.

Called the Kinect Study, the research is part of phase IIb of Neurocrine's testing of the drug, which doesn't have a formal name yet but is referred to as NBI-98854 and classified as what's called a vesicular monoamine transporter 2 inhibitor.

Frontier is participating in two parts of the Kinect Study. Late last month, the organization wrapped up enrollment in the first round, which solicited participants who had taken antipsychotics to treat schizophrenia and developed tardive dyskinesia. One of about 50 research centers nationwide selected to participate in that portion of the study, which includes a total of about 120 patients, the organization expects to wrap up that work in the next couple of months.

The Kinect Study is a blind, placebo-controlled study, which means some patients are receiving the drug and others are receiving a placebo, and participants don't know which they are taking.

Late last month, Neurocrine selected Frontier as one of 30 centers nationwide to participate in the next portion of the Kinect Study, which will be open to a greater range of tardive dyskinesia sufferers, including those who developed the condition while taking medication for gastrointestinal problems and for mental disorders other than schizophrenia. Hampton says the organization expects to begin enrolling other participants in that study early this month.

While the criteria for participation aren't as strict as they are in the first round of research in the Kinect Study, only a handful of participants are expected to participate once again, Hampton says.

She says researchers will be reaching out to Spokane-area gastrointestinal practices in hopes of finding study participants who have developed tardive dyskinesia through taking metoclopramide, which has been used to treat gastro esophageal reflux disease, known more commonly as GERD, and other digestive-tract problems.

Enrollment in that portion of the study is expected to occur over the course of three months, Hampton says.

While Frontier doesn't have any results to share yet in terms of the drug's effectiveness, the side effects have been minimal, Hampton says.

"The safety profile has been really good," she says.

Including the Kinect Study, Frontier currently is involved in seven research projects, Hampton says. Kinect, however, is unusual for the organization, she says, because it's an earlier stage of study than what Frontier typically is involved in.

"This trial shows we are becoming a national player in the research industry," Hampton says.