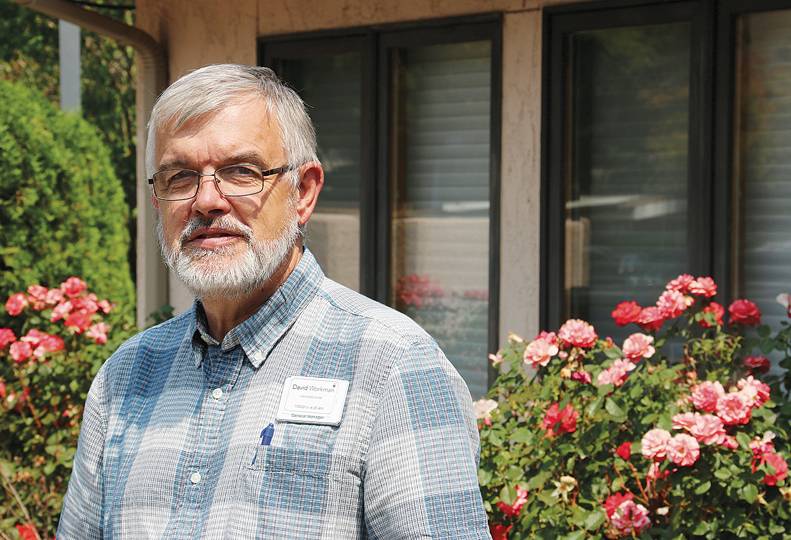 The 68-year-old Workman says he has a simple message for families and potential residents considering taking up residence there.

Harvard Park, which opened on New Year’s Day 1985 at 1616 E. 30th, is owned today by Holiday Retirement Inc. based in Winter Park, Fla. The company operates about 265 retirement communities in 43 states across the U.S., according to the company’s website.

Harvard Park now has 85 residents, and 25 apartment units currently are vacant. The facility is located near the southwest corner of 30th Avenue and Pittsburg Street, across Pittsburg from the Touchmark on South Hill retirement community.

Harvard Park employs a total of 30 people, some of whom are part-time food servers, according to Workman.

Located on 4.5 acres of land, the 57,000-square foot, 107-unit apartment complex includes a mix of studio, one-bedroom, and two-bedroom apartments.

“We don’t want people to feel like they’re stuck and have to stay here,” he says.

The monthly costs include three meals per day, daily housekeeping, transportation for medical appointments, social activities, an on-site exercise facility, and all utilities, he says.

Workman says the most familiar refrain about Harvard Park he’s heard from residents in his two-decade tenure is, “It feels like home.”

“The people who live here feel like family,” he says. “Our goal as an organization is to help people continue to grow and continue to contribute as long as they want to. And we encourage that to the end.”

Workman says his childhood experience of going to visit the “shut-in” after church with his family is what helped lead him to his current career.

“The shut-ins were the people who didn’t drive; no one came around,” he says. “We’d take cookies, or take some groceries, or a just a card just to spend time and say hi to them.”

Later his father had to be placed in what was then referred to as “an old folks home,” Workman says.

“It was the tile and linoleum floor,” he says. “It’s still a big part of the perception of my generation. We’re getting past it a little bit, but a lot of the folks who are older are still Depression-era, and you don’t spend money frivolously. And if they weren’t Depression-era, then their parents were and it was instilled in them.”

And if not that, then there are those seniors who cite a fear of losing their homes and independence upon entering a retirement community.

Workman adds, “There wasn’t anything like this when I was a kid. I still visit those here who are shut in, and I encourage them to be able to get to a lifestyle, a living arrangement that’s going to better afford them a quality lifestyle at the end.”

Regardless of whether their adult children made the unilateral decision to move them, or if the residents made the choice on their own accord, Workman says he and the staff are committed to helping residents transition as best as they possibly can.

“We want to make them feel loved in our community regardless of where they’ve come from,” he says.

Workman estimates the average age of a Harvard Park resident to be around 82. One resident is scheduled to turn 100 on Aug. 12—and a party is planned, he says.

Workman uses a single word to describe what it was like trying to get residents and staff through the brunt of COVID-19: “hard.”

“When, as a manager I’ve got to tell an 85-year-old person who’s lived a certain lifestyle that they can’t do something? … Be forced to stay in their apartment 24/7 for months?”

All exercise and socialization came to a halt, he says.

“Then you watch them literally deteriorate because of restrictions,” he says. “A lot of people came to me and said, ‘I really don’t care about COVID, I want to live.’’’

The good news, however, is that only one resident contracted the virus, and that resident was asymptomatic, Workman says.