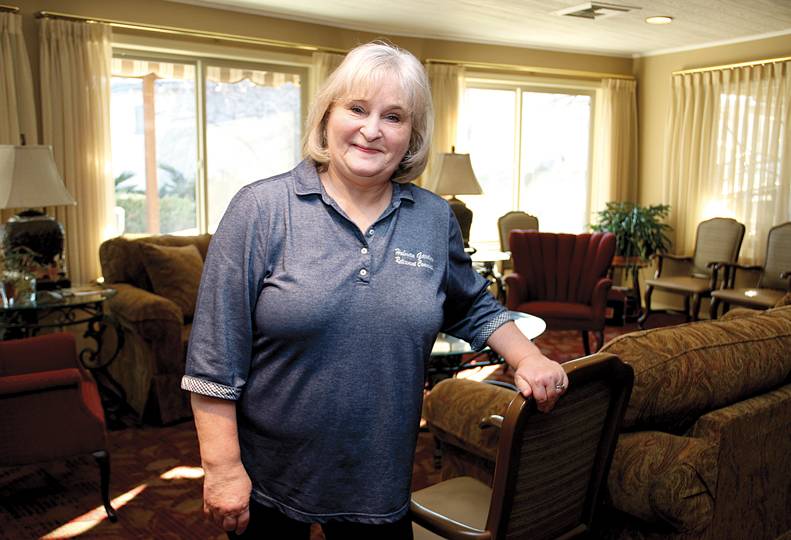 Most recently, employees at the 96-unit facility have been cross-trained in culinary duties in order to cover staffing gaps.

“We all went through the process to get our food handler’s card so that we were ready, so if something came down, we could all step in—and we have,” Hubble says. “We’re having problems getting certain positions filled, so we all step up.”

Including dedicated kitchen staff, there are about 24 employees at Holman Gardens, which is located at 12912 E. 12th, in Spokane Valley. Those employees serve 112 residents, most of whom are women, Hubble says.

Like other retirement facilities, Holman Gardens worked hard to maintain social connections during the most isolating months of the COVID-19 pandemic, before vaccines were available to residents, she says.

“It was hard during Christmas, because Christmas is one of our big extravaganzas here,” Hubble says. “We always had a residents’ brunch, and we aren’t able to do that.”

“The staff worked very hard. We’d dress up in costumes, we’d deliver little things to their doors,” she says. “On Christmas, we went down the halls singing Christmas carols.”

Staff set up several different festive scenes and decorated Christmas trees in the dining room for residents to tour in small groups.

Hubble claims Holman Gardens was one of the last retirement facilities in the Spokane area to receive doses of the COVID-19 vaccine.

“We finally got (residents) all of their vaccinations, but they’re still pretty reserved about actually going out into the community,” Hubble says. “It’s the fear factor. What’s going to happen?”

For some residents, their only forays outside of the facility are the weekly one-hour shopping trips, Hubble says.

“They haven’t gone on any large trips,” she says. “Grocery stores and the mall are about all they do.”

“We take their shopping list and go to the store, then they come down to the marketplace and pick it up,” Hubble says.

One resident has taken it upon herself to keep Holman Gardens’ Wii virtual bowling league active.

“That was one of the things that has kept going the whole time, because it’s played in small groups of only four people,” Hubble says. “For a long time, we only had a few people doing that. We have a resident in-house who has grown that to five different groups. The residents work hard to be involved, too.”

Hubble says the residents became more enthusiastic about playing billiards after a residents’ council meeting at which she brought up the idea of selling Holman Gardens’ billiards table, as it had gone mostly unused for several years. But residents objected, noting that billiards is a COVID-safe game that requires few people in an enclosed space.

“Now they’re coming back and playing pool again,” Hubble says. “It’s been fun to watch them get back to being involved in life.”

Although residents have been more socially active recently, Hubble says many retreat to their living spaces when local COVID-19 case rates climb, emerging when a wave of infections has diminished.

“It’s amazing what they can adapt to,” she says.

The restructuring Holman Gardens undertook about 15 years ago is an example of the organizations’ adaptability, Hubble says. Holman Gardens, which was established in 1984, converted from a buy-in model to a lease model in 2005.

Under the buy-in model, residents had already paid an upfront fee of $45,000 to $90,000, and paid a monthly maintenance fee after buying in.

Under the previous model, residents would have received a portion of their buy-in fee when they left Holman Gardens.

About half of Holman Gardens’ units are leased at market rates. The remainder are designated for low-income senior households, such as those relying on Medicaid benefits.

Hubble, who has been with the retirement community for 33 years, says she remembers the restructuring process vividly.

“It was a total nightmare,” Hubble says. “Because we didn’t have enough to pay off all the refundable portions, we had to get pretty creative. We came up with a different type of structuring so that some residents would get reduced rents for so many years, instead of taking the full payoff.”

As a result of the restructuring, Holman Gardens no longer offers meals to residents free of charge. Residents who opt into the meal program, which provides dinner daily, are charged $276 per month.

“Now we only have about 50% of our residents on the meal program,” Hubble says.

Every unit has a full kitchen, and many residents choose to cook for themselves, Hubble says.

Holman Gardens has an indoor pool, which up to four residents are currently allowed to use concurrently, due to COVID concerns. The retirement community also has a raised garden area, a craft room, a computer room, a game room, and an exercise room.

Hubble says Holman Gardens currently has a waiting list of about 60 people.