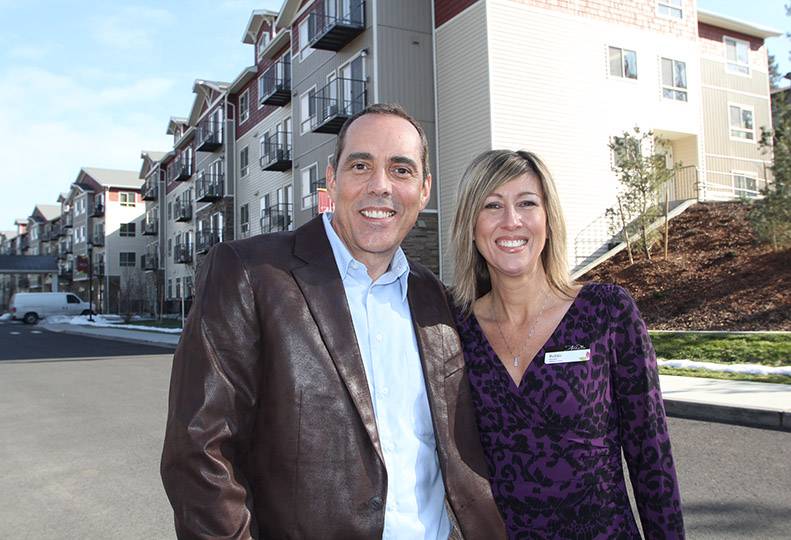 -—Staff photo by Jessica Valencia
Cecil Rinker and Robin Kincaid, both of Affinity Living Communities, say the new facility on Mill Road is one of seven such communities to open since 2011. 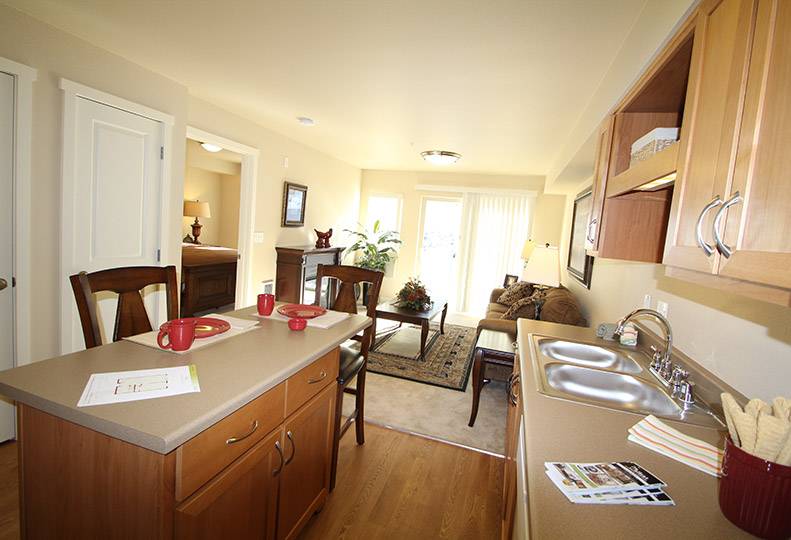 Inland Group LLC, of Spokane Valley, is seeing demand from recently retired residents and others in the baby boomer generation for its newly developed senior living facilities operating under the Affinity name, says Cecil Rinker, director of operations for Affinity Living Communities, which Inland Group owns.

Three new Affinity facilities have sprung up in Spokane and Coeur d'Alene over the last year, he says, and two more are slated to open in Washington state soon. In all, seven Affinity complexes have opened in Washington, Idaho, and Colorado since 2011, when the first facility began operating in Walla Walla.

Inland Group has spent almost $40 million constructing three adult living facilities in Spokane and Coeur d'Alene, which all opened within the last year. The complexes are managed by FPI Management Inc., based in Folsom, Calif.

A 62-and-over adult living facility operating north of Spokane as Affinity at Mill Road opened in August. While under construction, the project was referred to as Traditions at Mill Road, Rinker says. It took about a year to construct the 140,000-square-foot facility that includes 150 living units, he says. The complex cost $12.8 million to construct.

A second 150-unit Spokane facility, Affinity at South Hill, is located at 3304 E. 44th and also opened in August. Affinity at Coeur d'Alene opened this month at 3594 N. Cedarblom with 121 living units. Both of those Affinity facilities are designated for residents 55 and older.

Occupancy at Affinity at Mill Road already is close to 30 percent, Rinker says. Affinity communities so far are at an average occupancy rate of 48 percent, he says, adding that all of the communities are in various stages of leasing depending on whether a community is open or not.

Rinker sees the target occupancy rate for Affinity facilities at 90 percent and projects it will take about 14 months from the opening date to get there.

Rinker says two communities in the state are under construction. An Affinity facility is slated to open in Kennewick in June, while another is expected to open in Olympia next year, he says.

Affinity at Mill Road includes common areas such as an Internet cafe with computer terminals, a community kitchen, a bar, and a theater room. The complex also has a second building on site which includes a swimming pool, woodworking shop, and dance studio.

All common areas are shared, and all residents take care of those spaces, says Robin Kincaid, community director for Affinity at Mill Road.

Rinker says Affinity at Mill Road employs one housekeeper, who takes care of light cleaning in the common areas. The housekeeper also provides a 15-minute cleaning service two times a month for residents, which is included in the rent, Rinker says.

Kincaid says rent ranges between $995 and $1,400 a month depending on the size of the apartment. Affinity offers studios, and one- or two-bedroom apartments at all of its facilities, Rinker says. Each apartment comes with a full bath and kitchen, fully equipped with appliances. Rent includes all utilities and cable and wireless Internet access, he says.

Residents can sign a two-year lease or can lease month to month, Rinker says.

Rinker says baby boomers are more likely to work beyond traditional retirement age than previous generations. He says this type of facility enables people to downsize while still maintaining a large amount of independence.

"I think we're going to find a lot of people that way," Rinker says.

Inland Group specializes in building multifamily housing and low-income senior housing. The company developed projects such as Big Trout Lodge, a 523-unit apartment complex in Liberty Lake, and the Tressa Apartments, a 474-unit affordable housing complex in Seattle, among other similar housing projects across the U.S.

With retirement complex construction specifically, what the Inland Group saw was that the retirement housing industry was covering the low-income and higher-income housing rental markets, but affordable renting options in the middle didn't exist, Rinker says.

"There's certainly a recipe we look for" when developing a property, Rinker says, such as its proximity to restaurants, stores, and pharmacies. Affinity at Mill Road is somewhat of an anomaly in that recipe, Rinker says, categorizing it as more rural than other Affinity locations, even with it being close to the Wandermere shopping area.

He says typically, Inland Group needs about five acres of land to build an Affinity community.

Rinker says the biggest challenge so far has been trying to differentiate the Affinity communities from a retirement community.

"We really don't consider ourselves a retirement community," Rinker says. Instead, the staff and residents consider the Affinity facility an active adult community.

He says most Affinity communities open at roughly 20 percent occupancy, although factors such as the price of rent in the surrounding area can affect how many people choose to reserve a unit before the facility opens, even though prospective renters don't need to reserve a unit. Affinity at Lafayette, a Colorado complex, opened with 80 percent occupancy, Rinker says, largely due to the costs of rentals compared with the cost of an apartment at the facility, which is about $1,500 for a two-bedroom unit.

The facility has about one parking space, carport, or garage per resident at Affinity at Mill Road, Kincaid says. Most residents still work and drive, Rinker says.

Rinker says he is upbeat about the outlook for this type of housing model, adding he expects more Affinity communities to open in the future.

He says he believes more senior housing models similar to that found at the Affinity facilities will crop up, both through new affordable housing construction and retirement communities revamping their business model.

"Everything in the senior living world seems to be trending toward something like this," Rinker asserts.