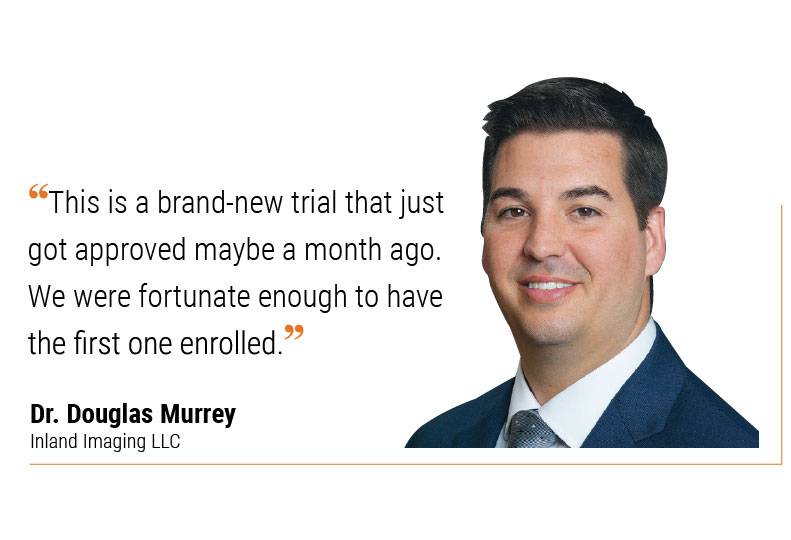 Using what’s known as Y-90 radiation therapy, the treatment uses microscopic beads filled with yttrium-90 isotope “designed to be delivered directly into tumors through the arteries that feed the tumors,” says Dr. Douglas Murrey, an interventional radiologist at Inland Imaging. Once in place, the radioactive isotope destroys the surrounding tissue from within the tumor.

This differs from conventional radiation therapy, because it administers the treatment directly to the tumor through the arteries while traditional radiation is administered through external beams, Murrey says.

“There’s a lot of extra tissue that gets irradiated when we do that,” he asserts.

While the Y-90 treatment concept has been around for at least a decade, “the new piece is how we measure how much dose we’re delivering and how precise we can make our calculations so we can do it safely and more effectively,” he says.

In the past, treatment dosages would be determined using one of three equations, all of which were derived from population-based studies and “are kind of best guess estimates,” says Murrey. Those doses are set up to safely treat patients based on their assumed liver size based on their height and weight.

“Patient A may be a very large human being but happens to have a very small liver,” explains Murrey, “And (traditional measures) wouldn’t take that into effect. Just the opposite can be true as well. If you have a small 90-year-old lady who’s got a very large liver in comparison to her body size, you could well underdose that patient and not know it.”

In the trial, Inland Imaging is one of 16 clinics using a SPECT/CT nuclear scan and a radioactive tracer to measure precisely the volume of a patient’s liver and its tumors. The method is known more formally as voxel-based dosimetry.

“It allows us to look at the exact distribution of where the treatment will go, and so we can hopefully predict with much more accuracy what activity we need to put in to achieve our goals,” he says.

He adds, “The hope is it will allow us to tailor our treatments to individual patients and to individual tumors that we hope will increase the odds of long-term survival for patients with fewer side effects.”

“We partnered with MIM about two years ago to help develop the software,” says Murrey. “We showed MIM and Sirtex how we’ve been using it, showed them some of our outcomes, and that really is what generated the excitement.”

As of mid-June, only one patient was enrolled in the trial, says Murrey. A second patient was being screened for participation.

“This is a brand-new trial that just got approved maybe a month ago,” he says. “We were fortunate enough to have the first one enrolled and we just saw our second one in-clinic yesterday. So, hopefully we’ll have two here pretty soon.”

The trial likely will last about two years, though Murrey notes that the goal is to enroll about 100 to 150 patients between the 16 study sites.

“It’s more of an accrual thing, they’ll stop when they get to their target,” he says.

The researchers are actively looking for volunteers, which are identified through referrals and tumor boards. There is no cost to participate.

To participate in the trial, patients must be over 18 years old and must have hepatocellular carcinoma, which is the primary liver cancer that affects adults.

Patients also must have either a single tumor that measures up to 8 centimeters in diameter, or they can have multiple tumors, up to a total sum diameter of 12 centimeters, he says.

Patients in the trial will undergo a two-part procedure, the first to map the liver and tumor to determine the dosage, and the second to administer the dosage.

“It’s an outpatient procedure,” he says. “It’s a single needle poke either in an artery in the wrist or in the groin.” Mapping the body takes about an hour and a half, while the treatment, which occurs one to two weeks later, takes about 45 minutes to an hour. Patients must lay flat for about two hours after each procedure before they can go home.

“As far as side effects, there are very few,” says Murrey.

Fatigue is the most common, though some patients—about 10% to 15%—experience abdominal pain.

Unlike conventional procedures, which can take a minimum of five visits or could require hospitalization, both stages of the trial procedure are outpatient.

This isn’t the first time Inland Imaging has participated in a national Y-90 trial. In 2016, it took part in what was known as the Resin Trial, which studied how Y-90 affected tumors that couldn’t be surgically removed.

“Inland has been actually very active and on the cutting edge of some of the Y-90 trials out there,” contends Murrey. “It’s actually unusual for a city of this size to have access to truly cutting-edge medical devices and research.”