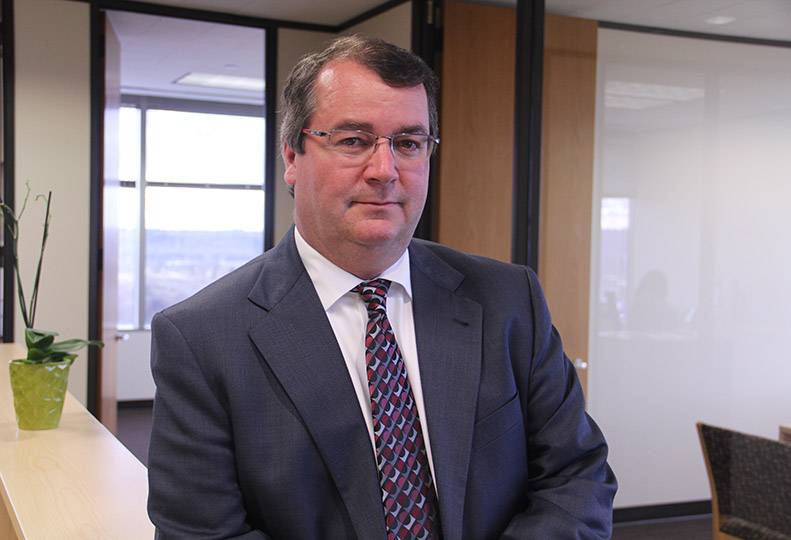 Tom Guthrie has been in the investment brokerage business for almost two decades, and says he's hopeful the roughly year-old Spokane branch of Seattle-based brokerage company McAdams Wright Ragen Inc. will continue to grow here on the heels of moving into new office space.

Guthrie is senior vice president and branch manager for the company's office here, located on the 19th floor of the Bank of America Financial Center, at 601 W. Riverside.

All seven of its employees at the Spokane office came from Wells Fargo Advisors, an investment service affiliated with Wells Fargo & Co. The company occupied temporary space on the 16th floor of the building before moving up to the top floor almost two months ago, where it occupies 6,400 square feet of office space.

He says a typical client with the company is looking to invest $250,000 or more into stocks and bonds.

"Around the $250,000 area and up is where we can really utilize the focus list and buy all the names we want to buy," Guthrie says.

Guthrie says the seven people the company currently employs here include five investment brokers and two assistants. He anticipates the office here will grow to have up to 25 employees within the next two years, adding that 15 of those employees will be brokers.

"It won't be long until this space will be totally filled," Guthrie predicts.

McAdams Wright Ragen got its start in Seattle in 1998 when Scott McAdams and Brooks Ragen opened the first office. Since then, the company has opened five offices in Washington and one in Portland. The Spokane office, its newest, opened in May 2012.

The company employs 189 people companywide, including 82 brokers and six analysts. The analysts, all based in Seattle, recommend stocks to invest in.

Guthrie says the company has three main lists that it uses for picking stocks: a focus list, an analyst choice list, and a Pacific Northwest list. The focus list includes stocks that have been approved by a majority, if not all, of the company's analysts. Stocks that an analyst expects to perform strongly but that weren't approved by the group for the focus list can appear on the analyst choice list, he says. The Pacific Northwest list includes stock for between 60 and 70 companies based in the region. Guthrie says the company's analysts continually follow stocks on the Pacific Northwest list, but larger companies, such as Electronic Arts, that may have been on the list previously generally won't be considered for the focus list again until the stock's performance is brought to an analyst's attention.

Guthrie says the company focuses on value stocks, or ones that its analysts consider undervalued, which is in contrast to brokerages that look for stocks exhibiting a strong growth pattern. He says McAdams Wright Ragen analysts look for hints that a stock that has fallen out of favor on the market may be making a comeback soon, catching it before it starts the climb in price again.

Guthrie says its analysts look for a catalyst that will help raise a company's share price, such as earnings, new product releases, or a competitor's performance. Analysts set up a sale discipline used by brokers to buy, sell, and hold a particular stock. A sale discipline refers to a buy-sell strategy for a stock, determined by the analysts, he says.

He says the company's strategy lies in its method of selling off stock during an exuberance period, meaning the stock has become popular among investors. He says although the stock may continue to climb, the sell point for the company is intended to minimize risk for its clients' money, adding that many factors can contribute to a stock price changing quickly once it hits the designated sell point, or even before then.

"We invest in companies that we see true value," Guthrie says. "We may be so-called overweighted in technology, but if that's where we see the value, that's where we're going to be."

Guthrie says the company weathered the recession well. It was nearly impossible to escape the recession without getting hurt, but he adds that the company's value-focused strategy in buying stocks helped it continue to perform.

"There was so much stuff to buy, we did phenomenally well," Guthrie says.

Guthrie started a Spokane branch of Seattle-based Ragen Mackenzie Group Inc. in May 2001, and the company became part of Wells Fargo Advisors about a month later, stemming from an agreement by Wells Fargo to purchase the parent corporation in September 1999. Guthrie worked for the office for about 12 years after it became Wells Fargo Advisors. He says Wells Fargo went on to acquire Wachovia Corp. in January 2009, increasing the number of employees in its brokerage division from to almost 19,000 from 2,200.

For larger investment divisions tied to banks, it can become difficult to monitor thousands of individual brokers, Guthrie says.

"The risk is so great in managing the brokers, they have to restrict the product base," Guthrie contends.

With McAdams Wright Ragen, Guthrie says the brokerage company doesn't offer insurance options, like Wells Fargo Advisors or other large investment services providers, but he contends that it does offer a wider array of investing options and more freedom for its brokers.

"It's really enlightening and a good feeling to have a firm that goes back to the basics," Guthrie says.