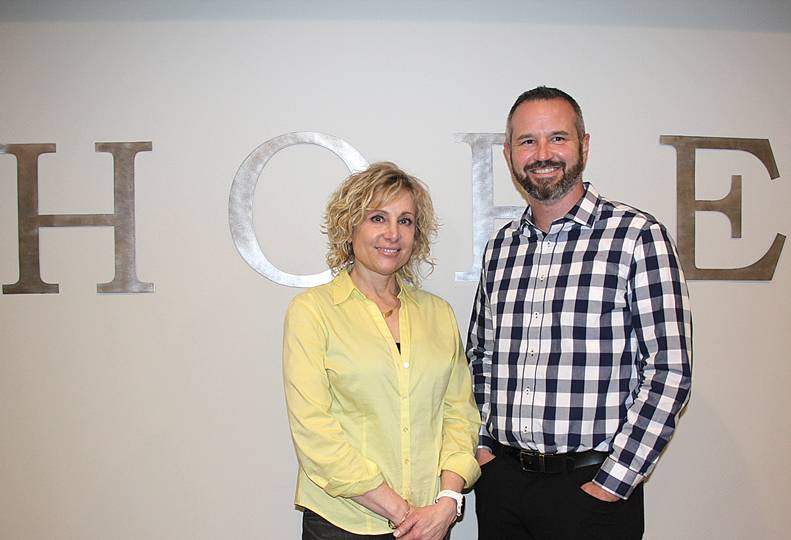 -Karina Elias
Tina Gordon and Josh Spartz are co-owners of Ketamine Clinic of Spokane, which has been treating severely depressed patients since 2017.

The Ketamine Clinic of Spokane is seeing a steady rise in demand from patients with acute depression seeking microdosed infusions of ketamine, an anesthetic that also has a reputation as a mind-altering drug with hallucinogenic properties, say clinic co-owners Tina Gordon and Josh Spartz.

Gordon and Spartz, who both are nurse anesthetists, say there’s a growing body of research that supports the use of ketamine to treat patients with severe, treatment-resistant depression, anxiety, post-traumatic stress disorder, suicidal thoughts, and other mental illnesses.

Ketamine was first developed in the 1960s as an anesthetic drug. The U.S. Food and Drug Administration hasn’t approved ketamine for the treatment of mental illness, but it is listed as an essential drug by the World Health Organization and it is a commonly used medication in the emergency room and operating room. In 2006, the National Institute of Mental Health published a study which concluded that a single intravenous infusion of ketamine delivered rapid antidepressant effects.

There are many theories of how the drug works, but the most prevalent is ketamine’s focus on repairing broken receptors in the brain on the nerve neurotransmitter glutamate that give way to feelings of happiness and joy and block suicidal ideation, explains Gordon.

The clinic co-founders say past clinic trials show that 75% of patients experience significant relief of symptoms from the treatment.

Gordon and Spartz say they both have people in their lives who have severe depression. They spent time researching different treatments, and when they read research into the benefits of ketamine, they decided to act on it, says Gordon.

Treatments are conducted by appointment only. The clinic has two treatment rooms, a waiting room, and a consultation room. Gordon and Spartz say they’ve seen demand for the treatment in the past two years and are considering opening a third treatment room to accommodate more patients.

Patients must be referred by a person licensed to provide an appropriate diagnosis, such as a primary health provider, psychiatrist, or psychologist. The clinic treats adults and adolescents as young as 12 years old.

“I feel like people can come to us because they don’t like the effects of traditional medications. Also, we’re super effective for suicidal thoughts so sometimes it’s good to get those patients in sooner,” says Gordon.

The clinic’s ketamine treatment regimen consists of six 40-minute sessions over a three-week period as recommended by the National Institute of Mental Health. Each appointment is 1 1/2 hours which includes time to assess the patient’s response and well-being, and a period of rest after the infusion has been administered, says Gordon. Each infusion costs $425.

Additional booster doses can be prescribed every three to four months. Some patients, however, have remained in remission and haven’t needed boosters, adds Gordon.

Vinh Muller-Buu, a patient of the clinic, had been experiencing severe depression, post-traumatic stress disorder, and thoughts of suicide since he was a young boy, first attempting suicide in the third grade.

Last year, he underwent the six sessions of treatment at the clinic. Since the first treatment, his suicidal ideations have disappeared, claims Muller-Buu.

“I’ve never had anything that has worked like this. The first treatment, a few minutes in, was a breakthrough,” says Muller-Buu of his experience. “Every treatment after that just built on it.”

Muller-Buu adds that he had attempted suicide the week before his first treatment, and that ketamine was his last resort.

Gordon was present when Muller-Buu came in for his first visit and she says she noted on his chart that she was concerned for his overall well-being.

“We take care of very sick people—patients that come straight from the emergency room,” Gordon says. “Vinh was very sick, and I knew if this didn’t work for him, he would follow through with this (suicide) plan.”

Spartz says there’s about a 15% to 20% chance that patients won’t respond to the treatment.

Muller-Buu adds that he believes what helped him—and could help others—was learning about the research with psychedelic drugs and coming prepared with an open mind.

“If you’re not familiar with psychedelics, you might just be distracted by the novelty of it,” he asserts.

Spartz adds that the ketamine treatments involve microdoses of the drug, and patients are never pushed to the point of seeing “melting walls and talking trashcans.”

Muller-Buu was married to his partner last summer. The couple own a home and a business together and are thinking about the future, says Muller-Buu.

“I never thought about a future because I thought I would be dead by now,” he asserts.

According to the Anxiety & Depression Association of America, major depressive disorder is the leading cause of disability in the U.S., affecting 16.1 million adults, or 6.7% of the U.S. population age 18 and older in a given year.

PTSD affects 7.7 million adults, or 3.5% of the U.S. population and is more common in women, reports the ADAA.

In January, a pair of Washington state lawmakers introduced legislation that would legalize the use of psilocybin mushrooms, or “magic mushrooms,” for adults 21 and older.

Spartz and Gordon say that if the legislation is enacted, they will consider including psilocybin treatments in addition to ketamine.