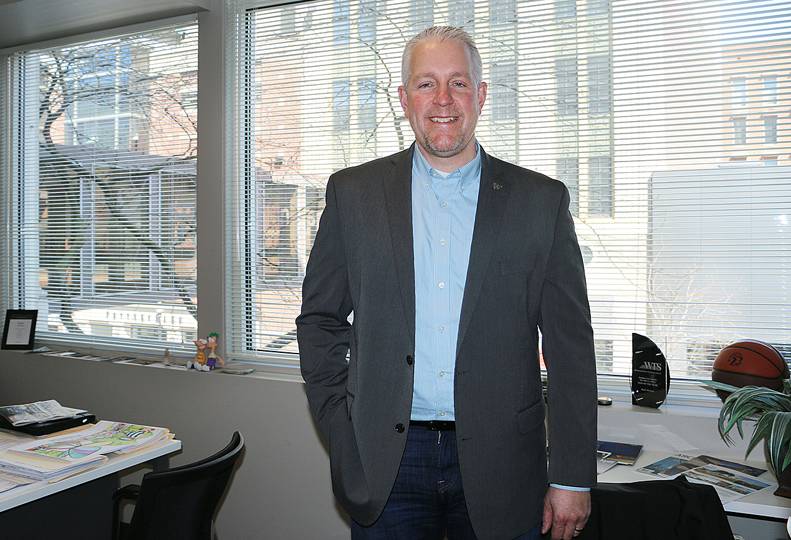 Seattle-based KPFF Consulting Engineers has put down roots in downtown Spokane and has plans to embed itself more permanently in the growing Spokane market.

Spokane-born Mark Brower says he jumped at the chance to rejoin KPFF and stay in his hometown to spearhead the opening of a permanent office here.

“This operation here in Spokane was hatched out of a relationship that I’ve had with KPFF for a long time,” Brower says.

Brower grew up in Spokane before moving to Seattle to attend the University of Washington. He says he and his wife, who is also a civil engineer, worked for KPFF’s Seattle office for a few years, so he was familiar with the company’s culture and leaders.

“I know the people,” Brower says. “And I know that to be successful in Spokane, it’s not the kind of place where you can dip your toe in the water. You have to have commitment.”

Before rejoining KPFF, Brower was vice president and area manager at the Spokane office of CH2M Hill Inc. and its new parent company, Dallas-based Jacobs Engineering Group Inc., where he says he managed the reconstruction of the Howard Street Bridge South, in Riverfront Park.

KPFF was founded in Seattle in 1960 and bears the initials of founders with last names of Kelly, Pittelko, Fritz, and Forreson. The company employs about 1,100 people in 20 offices throughout the U.S.

KPFF has been working on projects in the Spokane area for about a decade, Brower says, but the company decided to establish an office here last year. In September, Brower launched KPFF in a small space on the second floor of the Crescent Building, at 707 W. Main.

Brower is currently the Spokane office’s only employee, but he says a structural engineer will join him this month. He also expects to move the office elsewhere downtown this summer, though he declines to say where the new office could be located.

The company was brought to Spokane in the late 2000s to assess pedestrian bridges in Riverfront Park, Brower says, which parlayed into several projects in the area, including the $15.4 million University District Gateway Bridge.

KPFF currently is working on a few Inland Northwest projects. Near Spokane International Airport, the company is involved in creating a $2 million rail extension that splits off from the Geiger spur, Brower says. The Boise office of KPFF is involved in the $40 million Catalyst Building, just east of the south landing of the University District Gateway Bridge. At Havermale Island, in Riverfront Park, the firm is working on improvements, including an inclusive playground for children of all abilities.

One of the more complicated projects Brower currently is working on is the replacement of the Post Street Bridge. Brower says he’s unsure of the final cost of the bridge replacement but estimates it to be around $20 million.

Brower says he’s gone through several designs for the bridge because he wants to ensure a beautiful Spokane landmark also maintains its functionality.

“It’s one of the most photographed bridges in our city because of its situation between the upper and lower falls,” Brower says. “But its primary purpose, believe it or not, is to carry a 54-inch sewer main. It’s being upgraded to a 60-inch sewer main as part of this project. It carries a lot of the combined sewage flows from the south side of Spokane, takes it across the river, and down to the treatment plant.”

The sewer main must remain operational while the bridge replacement is underway, he says, adding a level of complexity to the project. However, Brower says he thinks he’s found a suitable solution.

“There are three arches underneath that bridge that support it,” Brower explains. “We’re looking at leaving them there and bolstering them so that they essentially will provide the required support needed for the new bridge structure.”

Under Brower’s plan, the bridge would be stripped down to its arches, which would be reinforced before a new bridge deck would be built on top of them. The sewer main, meanwhile, would continue to hang from its current place beneath the arches, before a new main would be hung elsewhere on the arches, and have the flow transferred to the new main.

Brower says he’s most excited by projects that have a direct impact on the community.

“To see that stuff come to fruition, to actually be realized, and see everybody enjoying the park—that’s really rewarding, even if you have a little part on it,” Brower says. “That’s the kind of stuff that gets you up in the morning.”

Brower says that when KPFF invited him to work for the company, he was also fielding offers from other firms that wanted to establish a presence in Spokane. He says firms are attracted to Spokane because educational institutions make the engineering workforce easy to access.

“We have a really strong education system here that supports the type of work that we do,” Brower says. “There are a lot of engineers that are grown over here in Eastern Washington through WSU and through Gonzaga and Eastern.”

Another major reason engineering firms want to establish Spokane offices, he says, is the growth the region has been experiencing.

“We’ve all noticed in the last 10 years, and maybe even more so in the past five years, that there’s been more of an interest in Spokane from a development standpoint,” Brower says. “You see companies come in to Spokane and invest here. People are opening their eyes to Spokane.”

Brower says his main goal for the Spokane office of KPFF is to ensure the company has a strong presence in the Inland Northwest.

“The vision, for me and for this office, is to have a standalone, sustainable KPFF office,” he says. “To me, that’s the happy place. We’ve gotten to a place where we’re sustainable, we’re recognized, we’re rooted, we’re part of the community.”