MacKay starts to manufacture a workforce 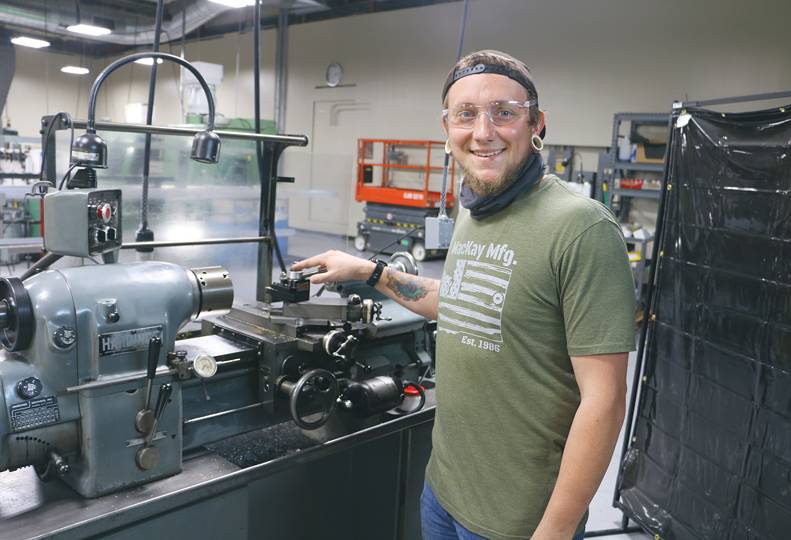 Coming off a record revenue year in 2020, Spokane Valley-based MacKay Manufacturing Inc. in March started its own in-house education program the company’s leadership team hopes will ensure future growth for years to come.

Company Vice President Katie MacKay says the company has discussed creating an in-house training program for decades but only recently have all the pieces to start one come together.

Most applicants with skills are from out of town, she says. “So, a couple of years ago, we decided to bite the bullet and hire a full-time teacher.”

“We’ve known Cal for decades from the industry,” she says. “He’s been a machinist for years. He has a good teaching background and is pleasant to be with.”

Before teaching his first class, Christen spent the first year of his tenure getting to know MacKay, its employees, shop processes, and overall company culture, MacKay says.

From there, Christen developed a curriculum and began teaching 25-year-old Zac Kreiger, the program’s first and only student to date. Kreiger also is among one of 165 MacKay employees. The company has added 10 employees since the end of 2018 and expects to add more staff this year.

Kreiger, who’d been working at another machine shop before getting laid off due to COVID-19, says he first heard of the opportunity via his father, who is long-time friends with MacKay general manager Bruce Szember.

“I just felt like it would be a good opportunity for me,” Kreiger says.

Says MacKay, “We were looking for the right student. If you’re going to launch a program, you want it to be a success. Bruce (general manager Szember) came to us and said, ‘I know this kid who has all the right soft skills and fits with our culture.’”

Christen works with Kreiger six hours per day during weekdays. MacKay says the length of the training program is dependent upon the student.

“How fast will they grasp our processes? The next student might come in with some machining experience versus none,” she says.

“The team has been really good to work with,” Kreiger says. “There’s a lifetime worth of information in this building.”

He says MacKay offers a comfortable culture in which people are approachable.

“I don’t feel afraid to ask questions,” he says.

Moving forward, MacKay says she would like to see a minimum of four employee trainees at any given time going through four to six months of training before moving on to become entry-level machinists with the company.

“When you talk to us, many of the other big shops around the area, there’s a real shortage of machinists for the demand in work that we all have,” she says.

Christen, who is 69, says he started his first machining apprenticeship 49 years ago this month. He says he’s a big proponent of teaching the fundamentals of machining.

“I’ve seen our industry getting away from that as the years have gone by, and it concerns me because I think it affects the overall quality of product,” he says.

Christen says he appreciates being able to have one-on-one interaction with Kreiger as the two are both able to give each other feedback.

MacKay estimates Kreiger will become a full-time employee during the third quarter of this year, which she says will “open him to a different a payment scale.”

Founded in 1946 by Ernie A. Sprow and Harry Wilson, the manufacturing company operated as E.A. Sprow Inc. for 40 years. Katie MacKay’s father, Mike MacKay, went to work for the company as a sales representative in the early 1980s.

“Dad wasn’t a machinist, but he was a very good salesman,” she says.

In 1986, Mike and his wife Debra MacKay “hocked everything they owned and decided to buy the company,” Katie MacKay says.

Mike MacKay, now 70, retains the title of president, though he no longer is involved in its daily operations. Those duties rest with 42-year-old Katie.

The company moved to its current location in 1988 and has completed three major additions since that time. The company recently acquired two nearby buildings just to the west and plans to expand the current facility sometime in the near future.

MacKay says she eventually wants to put all operations under a single roof in a facility encompassing at least 100,000 square feet.

“We don’t have a start date yet, but this building is pretty darn full right now,” she says.

Even in the midst of a record sales year in 2020 in which not a single employee was furloughed or laid off, MacKay says COVID-19 made for a challenging year.

“It was crazy, it certainly changed how our customers ordered,” she says. “The uncertainty of everything was probably the hardest thing to get through.”

“We have a fabulous team,” she says. “We spend a lot of time developing people based on soft skills versus the hard skills.”

“We treat each with respect and compassion,” she says. “People have bad days, but it’s not OK if someone’s a jerk.”