In some cases, making improvements helps to keep workers employed 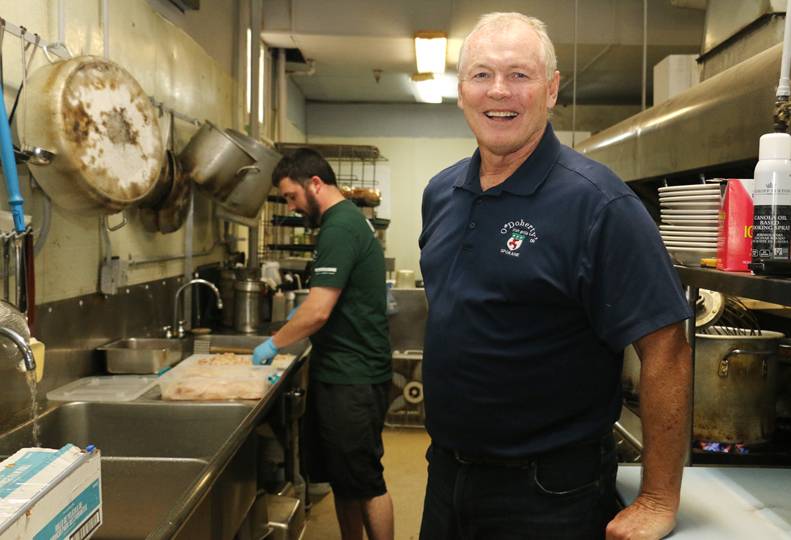 A handful of bars and restaurants in the Spokane area have used the shutdown caused by the COVID-19 pandemic to remodel and deep-clean their spaces, sometimes using Paycheck Protection Program loan funds to pay employees to help with the work.

Adam Hegsted, owner of The Gilded Unicorn, at 110 S. Monroe, says the restaurant is nearly finished with a much-needed kitchen upgrade.

“We’ve never had a real kitchen,” Hegsted says of the restaurant. “We’ve always operated with a ventless hood system. It’s a system that goes with each piece of equipment. It’s a lot of maintenance, the equipment itself is expensive, and it’s really loud — it sounds like a jet engine in there.”

Hegsted installed hoods over the equipment and added a gas line. The improvements will allow The Gilded Unicorn to expand its menu, Hegsted says, though he declines to say what will be added to the new menu.

The restaurant also is getting new flooring, Hegsted says.

“We had an issue with flooding a few months ago that did some damage to our wood floors, so we’re trying to get new flooring in there as well,” he says.

The cost of upgrading the kitchen and replacing the damaged flooring is about $100,000, Hegsted says.

The work is being done by Spokane-based contractor Mauer Construction Inc. Hegsted says the kitchen and flooring projects had been planned before the pandemic, but the shutdown made it easier to complete the work.

About 20 minutes south of Spokane, in Spangle, the Harvester Restaurant has done about $15,000 in painting and remodeling, says co-owner Melissa Bozarth.

“We painted the outside of the building, and we’re getting ready to put up some new lighting out there as well,” Bozarth says.

The men’s restroom has been remodeled fully, with a new toilet, a sink, urinals, and décor.

“With us being shut down, we figured we’d take advantage of the time,” Bozarth says. “When we open up, we want a nice impression for the people who come in.”

With their PPP loan, the Bozarths brought back their 16 employees to help with remodeling and painting. Bozarth says the parking lot will be restriped and the restaurant’s sign will be replaced by professionals.

The kitchen at O’Doherty’s Irish Grille, at 525 W. Spokane Falls Blvd., has a new sub-floor and flooring. Owners Tim and Sandy O’Doherty say the kitchen subfloor has been patched and repaired for all 28 years the restaurant has been in the space.

They knew replacing it would take about three weeks, but under normal times, the restaurant couldn’t afford to shut down for that long.

“We would never have been able to voluntarily take the closure, but because we were forced to close, we were like, well, let’s make lemonade out of this lemon,” Sandy O’Doherty says.

About 10 of O’Doherty’s 25 employees volunteered to help tear up the old subfloor, Tim O’Doherty says.

“A number of them said, ‘If you’re going to tear it up, that’ll be good therapy for us,’” he says.

The work entailed moving all equipment to one side of the kitchen, digging down through several layers of subfloor, and rebuilding the subfloor. After linoleum was installed, the process was repeated for the other side of the kitchen.

Tim O’Doherty says replacing the floor cost about $10,000. The owners of the building agreed to give O’Doherty’s a discount on rent some time next year in exchange for O’Doherty’s completing the work.

In the front of the house, the bar area has received new epoxy flooring, and the bar itself has been refinished.

“When we started renovations, we sanded and refinished the bar, which is a project that takes several days to cure,” Sandy O’Doherty says. “It’s always difficult to get that done — we try to do it over holiday weekends or some time when we have a closure.”

Employees also rebuilt some of the planter boxes on the restaurant’s patio, which the O’Dohertys hope to expand.

Sandy O’Doherty says a bigger outside dining area would be beneficial while  socially spacing. That’s likely more possible now that the city has adopted more flexible rules regarding outdoor seating.

Dani Jones, co-owner of The Monterey Cafe, at 9 N. Washington, says she and co-owner Jeff Maahs have used the forced shutdown to create a karaoke booth toward the back of the bar.

“We didn’t really have a karaoke booth before, we just had a corner where the karaoke person would be — they would stand there on the floor with people,” Jones says.

To create the karaoke area, Jones and Maahs took out a false wall on an elevated part of the building.

The entire space also was repainted and received a thorough cleaning, Jones says.

“We did a lot of cleaning, the stuff that we couldn’t get to because we’re open every day of the week from 11 in the morning until 2 in the morning,” Jones says. “When you’re open that much, a lot of stuff gets neglected.”

Work started in early April, after Monterey Cafe received a PPP loan that Jones says enabled her and Maahs to bring their seven employees back to help improve the space.

“It’s a great opportunity to keep our employees working and doing stuff that needs to get done around here,” Jones says.